Why shouldn’t Poland be richer than Britain? | Ben Sixsmith | The Critic Magazine

It's not the 80s anymore

You might have noticed a meme floating around the media about how Britons could become "no better off than people living in Poland". "If the UK continues with the same level of growth it has seen for the last decade," writes Sam Ashworth-Hayes, "Poland will be richer than Britain in about 12 years' time": It sounds like an absurd idea that in 2040 we might see complaints in the Polish press about a flood of British plumbers undercutting wages, or Brytyjski Skleps lining the rougher areas of Warsaw, but it isn't beyond the realms of possibility. This talking point has also appeared in the Telegraph, the Express and the Financial Times.

It often comes with a sense of vague alarm and bewilderment. Poland? The post-communist place? Don't they live entirely off vodka and potatoes?

Don't they have horses clippety-cloppeting down the streets selling women's underwear pinched off a truck in Germany? Poland?

A lot can change in nine years, in Britain and in Poland

Still, I think a lot of British people would be surprised by how much better things can be in the land of Lech Walesa and John Paul II. Equally, a lot of Polish people would be surprised by how much worse things can be in Britain -- given that a lot of Poles of my acquaintance appear to think that getting rich in the U.K. is as easy as walking outside with a wheelbarrow and catching the banknotes that rain down from the sky. Britain has had minimal economic growth for years.

Poland has long been enjoying some of the highest economic growth in Europe. It even emerged from the pandemic better off than other European nations with, as Pawel Bukowski and Wojtek Paczos wrote for the LSE, "a relatively lax approach to economic lockdown and a bit of sheer luck". Institutions often seem to work better as well.

I can generally visit a GP on the day I call. Britons often have to wait for more than a week. Maternal mortality is higher in the UK -- and infant mortality is about the same, despite Britain being much richer overall.

Actually, Polish life expectancy overall is just a touch shorter than British life expectancy, despite the nation having a lot more smokers. Polish kids have ranked higher on the PISA education rankings than British kids -- ranking, indeed, the third highest in Europe in science and maths, and the fourth in reading comprehension. Poland is a more peaceful place than Britain, with murder and rape generally being rarer (granted, statistics in the latter case are famously difficult to trust).

Terrorism, for reasons I leave to the reader, has been almost non-existent in Polish society. Some Polish achievements are more difficult to quantify. In Britain, the 20th century was marked by a curious habit of ripping down beautiful buildings and constructing ugly ones.

Poland, meanwhile, has been beautifully renovating and reconstructing many of its urban spaces, pursuing a philosophy of "preservation meets modernisation". Warsaw and Krakow are famous enough, but travellers could also visit lovely towns and cities like Wroclaw, Torun and Gdansk -- or my own, Tarnowskie Gory. It would be fantastically condescending, and dishonest, to suggest that everything is sunshine and lollipops in Polish life. Any Pole could tell you eloquently and knowledgeably about their struggles.

You think an inflation rate of 11.1 per cent is bad? How about 17.9? Wages tend to be lower in Poland than in Western Europe, leading to high emigration.

Seeing a GP is simple enough, but getting an operation is a right pain in the ass. Poles are bitterly divided on socio-cultural issues like abortion and the role of the Church.

Nor is Britain failing in all respects. If that were the case we would not have so many Poles who want to live there.

My intention is not just to big up Poland -- fond as I am of doing that -- or to thumb my nose at my homeland. It is to shake Britain by its national shoulders.  It is tempting to imagine that our economic, institutional and cultural conditions are as they are because, well, that's just how things are.

This is not always an instinct that should be resisted. The first premise of conservative philosophy is that individual and collective lives have limits. We can't click our fingers and be rich, safe and cheerful.

Many people, though, have an excess of gloomy acquiescence. They don't see that decline is not always a fact of life -- as natural as the changing colours of the leaves -- but a process that is at least somewhat within our leaders' control. That countries with less solid and deep political, cultural and economic foundations can equal and surpass British outcomes is proof enough of that. It is understandable that Britons want to be richer than Poles, just as they want to be richer than Germans, Swedes, Norwegians and the French.

Shock at the possibility of being overtaken by a bunch of Slavs, of all people, shows how much Britons have ignored not just their own decline but the accomplishments of others.

Let's do our best, going forwards, to succeed together.

It's even better in print 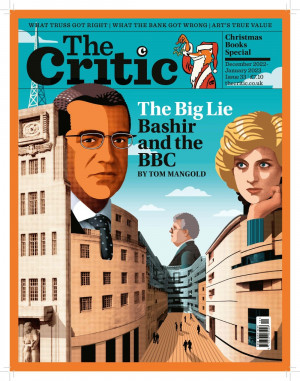