We are ready for direct flights to Amritsar, waiting for India’s nod: Canada Minister 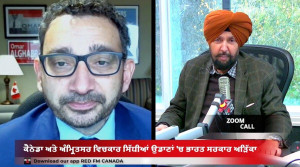 Canadian transport minister Omar Alghabra on Wednesday tweeted that the country is willing to start direct flights to Amritsar, Punjab, but it needs approval from the Indian government. Despite high traffic from Punjab, especially Amritsar, the city was left out from the recent pact between the two countries in which Bengaluru, Chennai, Hyderabad and Kolkata were added as new destinations of direct flights from Canada. At present, direct flights to Canada are available from Delhi and Mumbai only.

Before the tweet, Alghabra had also told the same in an interview to a Canadian FM channel. “We will continue to advocate for the Canadian people with the Indian government so that they get more travel options,” he said.

I had an interview with RedFM radio about our government’s effort to support establishing direct flights from Canada to Amritsar. We will continue to advocate for them with the Indian government so we can provide Canadian travellers with more options.?https://t.co/KYGqtEDvBK pic.twitter.com/vWuJD2pmuj — Omar Alghabra (@OmarAlghabra) November 30, 2022

Iqwinder S Gaheer, MP for Mississauga-Malton, later tweeted the same interview and said, “The Canadian government wants this to happen and is ready to make it happen.

However, we need the Indian government to approve direct flights to Amritsar. They have stated that they are not ready to do this yet.” He added that a large number of Indian travellers from Canada are headed to Punjab and they have been demanding this for a longtime. “Two nations must both agree and currently, one does not. This is not for a lack of trying from this government,” he said.

On direct flights to #Amritsar, Minister @OmarAlghabra is unequivocal in saying the ?? gov wants this to happen and is ready to make it happen.

However, we need the Indian gov to approve direct flights to Amritsar. They have stated that they are not ready to do this. (1/2) https://t.co/QNQ4dTRliO — Iqwinder S.

In a letter addressed to Air Canada last week, Canadian MPs Tim Uppal, Jasraj Singh Hallan, Bradley Vis, and Mark Strahl had called for direct flights between Canada and Amritsar to bolster tourism and for families to stay connected. “As Canadian MPs representing vast and diverse communities, we write to highlight the significant economic and social value in establishing direct flights between Canada and Amritsar,” the letter read. Subscriber Only Stories Meanwhile, when asked, Punjab BJP president Ashwani Sharma said, “I don’t exactly know what the Canadian minister has said, but we all want direct flights to Amritsar.

I will look into the matter and we will find a solution.” There are currently no direct flights between Canada and Amritsar, in the absence of which, travelers have to make multiple stops making the journey lengthy and arduous.

Punjabis mostly take flight for Canada from Delhi after travelling by road for several hours.