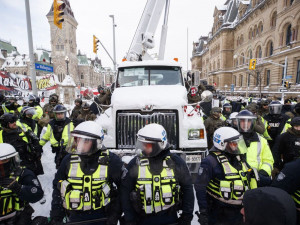 Three federal ministers are slated to testify today at the public inquiry that is scrutinizing the federal government's response to the Freedom Convoy protests that overran downtown Ottawa and choked several border crossings last winter.

Justice Minister David Lametti, Defence Minister Anita Anand and Transport Minister Omar Alghabra are on the witness list as the inquiry digs into Ottawa's decision to invoke the Emergencies Act in response to the weeks-long demonstrations. Watch the inquiry live in the video below.

Lametti's testimony is expected first, but the federal attorney general's answers may be restrained by solicitor-client privilege, which he cited earlier this year when giving testimony at a parliamentary committee studying the same issue.