Union Industries marks 50 years as the Best of British 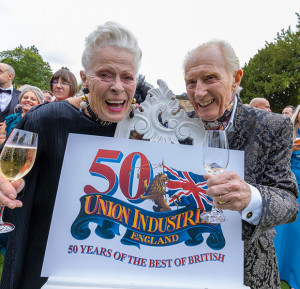 With a history that stretches further back than 1972, the celebration marks the incorporation of the business as Union Industries. The anniversary was commemorated by a glamourous black-tie event at the stunning Grantley Hall in North Yorkshire attended by current and former employees as well as its founders, Paul and Isobel Schofield, who are affectionately known by colleagues, friends and customers as Mr and Mrs S.

In addition, the company confirmed that each of its 76 employees would receive a 5% pay increase as well as GBP1,000 to help with the rising cost of living. Originally a tarpaulin maker and repairer known as Ralph Ellerker, which was founded in 1795, the business was acquired by Paul, who with Isobel, transformed the company into Union Industries. Known for its ‘Best of British’ strapline, the Leeds-based company manufactures a range of industrial products, most notably its market-leading range of rapid roll doors.

From its landmark factory and head office, known as Angel’s Wing on account of the pair of giant golden angels that adorn its entrance atrium which were acquired by Mr S from a movie prop maker, Union Industries produces its highly regarded products. The current range includes the Ramdoor, Bulldoor, Matadoor, Lion Door, Picadoor and the unique Eiger Freezer Door. These fast-acting doors are installed in distribution centres, warehouses, factories and storage facilities to improve logistics and save heat loss for companies across the UK and Europe.

Its portfolio of clients includes amongst others; Tesco, Cummins, Co-op, BAE Systems, Ocado, Jaguar Land Rover and DHL International. In 2014 its founders Mr & Mrs S took the decision to safeguard the future of the company in Leeds by transitioning to an Employee Owned (EO) structure where the majority of company shares are held by the Union Industries Employee Ownership Trust. Under Union Industries’ EO scheme, every employee can buy their own shares in the company in addition to being beneficiaries of the EO Trust.

New starters who join the company are also given shares after 12 months of employment. The business has continued to go from strength to strength. Although Union Industries has always boasted a committed workforce, becoming Employee Owned has further empowered its team.

This includes an added financial incentive because of an annual tax-free bonus, but also the ability to have a say in the running and future direction of the business. Andrew Lane, Managing Director of Union Industries, said: “This is a celebration of more than just a business, but a place where innovation and creativity can be expressed and being the best of British is more than just a saying, it’s something we passionately believe in and achieve through our products, our people and the way we work every day. “This landmark anniversary is a great way to celebrate and recognise the brilliant people we work alongside every day.

Union Industries is a special place to work.  Whilst being an employee-owned company in the UK isn’t unique, our version of it really embraces the people within the business and strengthens the family bond we have here.

“We are also really grateful to our large customer base, which has supported and continues to support Union Industries by investing in our best-in-class products that improve efficiency, productivity and sustainability.”