Andrii Shevchuk was behind the wheel of his truck in the Netherlands when he learned Russia had declared war on his home country of Ukraine. And returning home was not an option. Once Ukraine declared martial law, most men aged between 18 and 60 were banned from leaving.

He worried what that would mean for his family. “I knew as soon as I would cross the border, I would be called to fight… But then, who would provide for my family?

How would they survive?” he says. “I knew there was no way my wife and kids would stay in Mariupol.” The family had already considered moving to North America before the invasion. Now there was no time to lose.

Once they were reunited, after his wife and two children escaped the bombarded city with nothing more than a single backpack, the search for a safer life began. It was time to head to Canada. 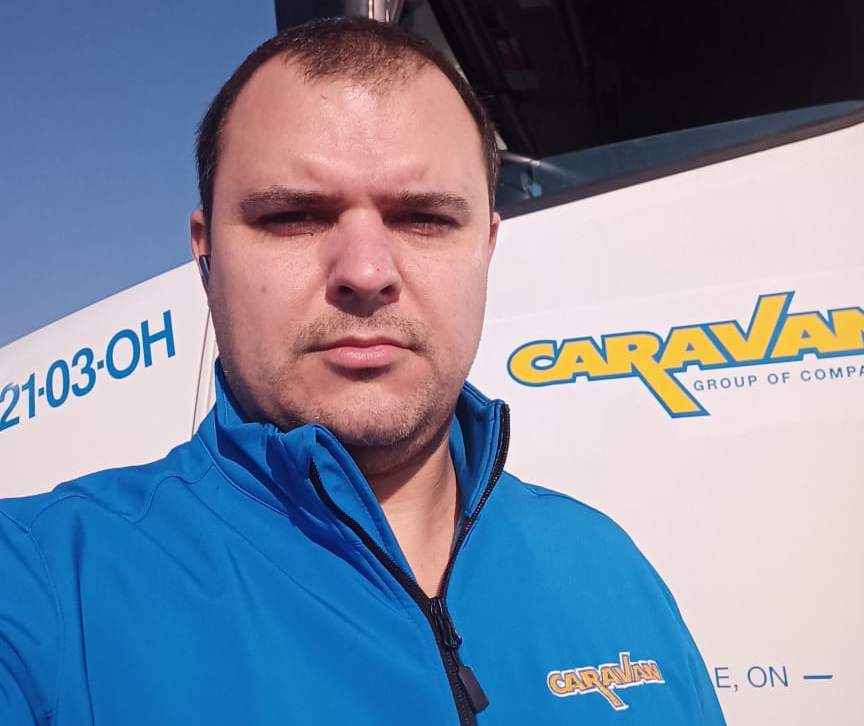 They were not the only ones to make the move. Since the war began, more than 420,000 people have arrived from Ukraine through the Canada-Ukraine Authorization for Emergency Travel (CUAET), according to Immigration, Refugees and Citizenship Canada.

Shevchuk is one of those who joined the trucking industry when they arrived, continuing his professional driving career at Caravan Group of Companies.

The fleet has hired about 10 Ukrainian newcomers since the war broke out, says Zoriana Workun, Caravan’s operations director. Fleet president John Iwaniura is of Ukrainian heritage. Workun belongs to the Ukrainian Canadian Congress.

And Caravan had already hired newcomers from several countries through a Labour Market Impact Assessment (LMIA). More Ukrainian nationals have joined them since the war began, filling positions from mechanics and drivers to dispatchers, accountants, and safety administrators — whether they had transportation experience or not. Anastasiya Chaban, who became Caravan’s executive assistant, holds a law degree and for the last few years been working on developing a family business.

She, her husband, and three kids left Lviv and spent two months “migrating” through Europe, trying to find a long-term place to stay.

‘A chaotic and impulsive thing’

“Coming to Canada was never our plan, even though we have family here. We’ve never even been here before,” Chaban says. “When we talk about deciding to leave the country, you’d probably imagine an adult that makes weighted decisions after a thoughtful process and preparation. You know, that’s what adults usually do.

But this was not our case. It was a chaotic and impulsive thing… I was filling out the CUAET application while we were driving from Poland to Italy.

There was no strategy, we just lived day by day.” They reached Canada on July 6. Three months ago, she secured a job at Caravan.

Chaban does not have experience in transportation, but her previous experience in Lviv taught her how to manage the business and establish relationships with clients and employees. “It’s a great opportunity to have. This is something I love and it’s very similar to what I did back home.”

But reflecting on interviews with other Canadian companies, she realizes that employers need to be willing to give people the benefit of the doubt and be prepared to find new ways to introduce them to the business. “It’s obvious that our English won’t be perfect, we might not be socially adapted in Canada, or have a job experience here…They [companies] just have to be ready to trust us. And Caravan was willing to show that trust.”

There were still challenges to overcome.

Some Caravan Group customers, for example, require anyone hauling their freight to have a security clearance. But given the circumstances, it can take months to secure criminal background checks from Ukraine or other countries where drivers might have worked. This leaves fleets looking for ways to work with the paperwork they already have.

“We’ve asked for exemptions, but some clients are hesitant to provide the clearance if someone’s not a citizen or a permanent resident. Some, however, have been a bit more lenient with it or provided some grace,” Workun says. Drivers can also face long waiting times while applying for Canadian and American visas, she adds.

Some of them have to wait months before being allowed to drive lucrative U.S. routes. The delays are not limited to immigration requirements.

Despite spending years operating a truck in Ukraine and other European countries, it took Shevchuk almost four months to secure an Ontario licence. Scheduling a test for a G licence in the Greater Toronto Area is “nearly impossible”, he says.

That took weeks. Then it took another three weeks until he could enroll in a school to complete the mandatory training for an AZ licence. Once the road test was passed and Caravan’s in-house orientation was completed, Shevchuk could finally shift from driving shunt trucks in Caravan’s fleet yard to hitting the road on his own.

He has now been driving solo for almost a month. The driving principles are the same in Europe and Canada, Shevchuk finds, but there are some differences. European truck drivers are not allowed to drive for more than 10 hours per day, he says as an example, and they must take a 45-minute break every 4-1/2 hours.

“The ELDs will fix any movement. Regardless of speed, if the truck moves for longer than 15 minutes and you’ve exceeded four hours and 30 minutes behind the wheel, you will get in trouble. The fines are up to 200 or 300 euros,” he says.

“Europe’s regulations are very strict when it comes to driver’s work-life balance.” Unlike in Canada, European drivers also tend to be paid by the day, regardless of the mileage or hours they spend driving, he says.

But Shevchuk is not the only one who had to adapt to the different environment. Chaban jokes that moving to Canada from Ukraine is like switching from Android to Apple.

“To me, Canada seems like an iPhone. There is always only one way of doing things, but this way is simple, and it always works. Whereas the Ukrainian way can be easily compared to Android — there are so many different ways,” she says.

Even the approach to garbage day seems different. “In Ukraine, you can choose a company that picks up your garbage. You can choose the day, and the time, and you can always reschedule or cancel last minute. However here, in Canada, if you do not put it [garbage] out on time, you will have to wait for yet another week for it to be picked up.

Take it or leave it.” There are many things both Shevchuk and Chaban still must adapt to while building new lives in Canada, not knowing if they will ever get a chance to return to Ukraine. Chaban hopes to bring her dog, who now lives with her niece, to Canada.

Shevchuk longs to see his parents who can’t leave Mariupol because his month is too ill to leave.

But they’ve both found a new home at Caravan and in Canada’s trucking industry.