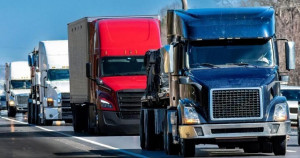 Employees of a regional trucking company were stunned earlier this month when they learned they would soon lose their jobs after Thanksgiving. The employees of Mid Continent Trucking received an email from their employer informing them that the company was shutting down and their last day of employment would be Saturday, Nov.

12 that the company would shut down Oct.

29, but drivers weren’t immediately told. Days later, staff were told Mid Continent Trucking would be sold instead, with the expectation that employees would be retained.

Walker said she was even offered a raise, but she kept looking for a new job.

“When I left on the 15th of November, we were still under the impression that Mid Continent was still going to be open, just under new ownership,” Walker said in an email to The Daily Nonpareil. The Mid Continent email on Nov.

16 also said that drivers would be contacted by WFX about potential employment. Other employees, like the mechanics at the company’s maintenance facility in Council Bluffs, received no such assurances.

“Yeah, we’re all out,” said Tony Crews, a mechanic at the maintenance facility. “They didn’t need us. They got their own workforce.” Driver Lee Massey, who provided the company email to The Nonpareil, said he was contacted by a WFX recruiter the week after employees received the email, but he has no plans to sign on.

He doesn’t think any of his fellow Mid Continent drivers will either. With Mid Continent, drivers are used to being home every weekend, which is a rarity in the trucking industry, Massey said. “Western Flyers Xpress, they have on their website that they expect their drivers to be out a minimum of three weeks at a time, and that you get one day off per week out, which is standard-ish for larger trucking companies,” Massey said. “It’s one of those companies that you go to when you just start out driving through.

Once you get experience, you don’t put up with that.” Massey said that rumors had been circulating among employees for about a month prior to the Nov.

16 email that the company was going to be sold, but no one knew any details. “Supposedly they were gonna buy us up and everything was gonna stay the same, other than the bosses, and business as status quo,” Crews said. “But I guess between the contract signing and the actual doing, they decided they just wanted the trucks and trailers.”

When contacted by The Nonpareil, Brian Wickersham confirmed via email that Mid Continent had agreed to sell its equipment to WFX. The deal is scheduled to close on Monday, Nov.

28. Wickersham also said that the decision to sell was economically motivated.

“There’s pressure to lower rates right now and a small company like us can’t survive in an environment like that,” Wickersham wrote. “To try to make a go of it, we would have had to lay off people, ask some to move and close a terminal down.” Wickersham did not respond to a later question from The Nonpareil about only giving employees 10 days notice of their termination, which appears to be insufficient under an Iowa law requiring employers with 25 or more workers to provide at least 30 days notice of a mass layoff to allow time for job searching and retraining. “We really are shocked,” Massey said. “We didn’t expect them to do something like this.

Massey previously worked for two trucking companies that gave employees “literally no notice,” he said. “You can show up at the yard and they say, ‘OK, you’re done, everybody. The company’s out of business,'” he said.

It being a common practice doesn’t take away the disappointment Massey felt when he read the Nov.

Chester Culver in 2010, is modeled on the federal WARN Act but has lower thresholds trigging compliance.

The federal version, enacted in 1988, requires employers with 100 or more workers to provide 60 days notice of a mass layoff or that the company is closing.

Be the first to know

Get local news delivered to your inbox!