A blast of winter turned the highway into a sheet of snow and ice overnight, causing several transport trucks to jack-knife and get stuck. "Semi trucks were slipping on the highway and causing them to turn sideways and block both lanes of highway," says Cpl. Adam Phillippe with the Revelstoke RCMP.

Phillippe says conditions have improved, with road crews plowing and sanding. Tow trucks have been busy clearing the Trans-Canada all morning. "East and west of Revelstoke is a slow go," Phillippe says.

"People are just being cautious and travelling at lower speeds, which causes backups as well. The roads are clearing up and the temperature is a little higher, so everything should be melting."

UPDATE: 10:10 a.m. More drivers report hazardous conditions on the Trans-Canada Highway overnight and into this morning.

Describing the situation as "havoc," one Castanet reader says: "It took me five hours to get from Salmon Arm to Revelstoke, with lots of trucks stuck on ice with no chains. "The road was wet ice, and I didn't see a single plow or sand/gravel truck between leaving Salmon arm at 5:30 p.m. and getting to Revelstoke at 10:30 p.m." The motorist says "road maintenance was non-existent." 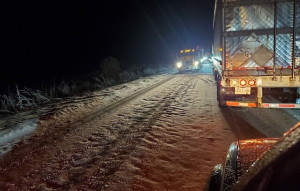 Travellers report conditions are still treacherous on the Trans-Canada Highway after its reopening this morning. The highway had been closed for hours following multiple incidents involving jack-knifed semis between Sicamous and Revelstoke. "The jack-knifed semis are cleared and traffic is getting through now, but the roads are compact snow and slushy ice, and super rough. 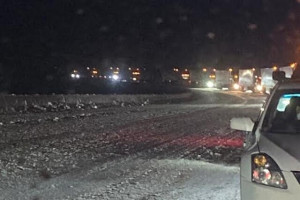 UPDATE: 8:50 a.m. DriveBC reports the incident scene on Highway 1 between Sicamous and Revelstoke has been cleared as of 8:40 a.m.

ORIGINAL: 6:20 a.m. Multiple transport trucks are believed to be jack-knifed in an incident that closed the Trans-Canada Highway between Sicamous and Revelstoke overnight.

DriveBC first reported about 1 a.m. that the incident had closed the highway between Bowolin Road and Highway 23 South, east of Craigellachie. A 40-kilometre section of the route was closed, however DriveBC reports as of 6:15 a.m. the route had reopened to single-lane alternating traffic. Motorists are advised to expect delays.

Webcams show snowy conditions as of 6 a.m. DriveBC reports there was also another incident within the closure area during the purging of backed up highway traffic west of Revelstoke. Motorists stuck in the closure reported multiple 18-wheelers jack-knifed near the Enchanted Forest.

"Westbound traffic is backed up a great distance," a reader tells Castanet.

Drivers are urged to watch for traffic control, slow down and drive to winter conditions. 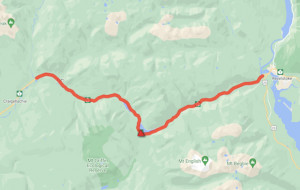