Still recovering from COVID-19, US public transit tries to get back on track 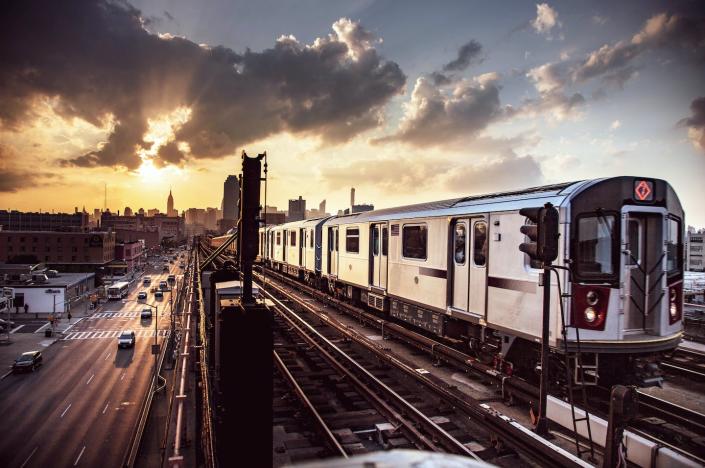 U.S. commuters take approximately 10 billion trips on public transit every year. SciLine asked Kari Watkins, an associate professor of civil and environmental engineering at the University of California, Davis, what cities can do to increase public transportation ridership and how people can make better use of this environmentally friendly mode of transportation. Below are some highlights from the discussion.

Answers have been edited for brevity and clarity. Why is transit a sustainable mode of transportation? Kari Watkins: Economically, it’s easier on people’s pocketbooks.

Environmentally, transit has less emissions per trip. From an equity point of view, transit is more sustainable than other modes because you’re more able to serve all people. This service is out there – you don’t have to afford a vehicle in order to be able to take it.

How does public transit affect traffic congestion? Kari Watkins: We save about 24% of our congestion levels by having transit in our 15 largest cities. What has research shown us about transit’s safety?

Kari Watkins: Transit is the safest mode of transportation because of the professional drivers and because of the nature of how the services are provided. They’re often in their own corridors with really, really high factors of safety in how those corridors are designed. When we look at cities where more people take transit as opposed to driving themselves, we always have lower crash rates, both internationally and across the U.S.

What are some trends of ridership on public transit systems in recent years? Kari Watkins: Over the past approximately five years before COVID, we were seeing declines in both bus and rail in ways that we had not seen before and could not be attributed to things like population decreases or lower employment rates. We saw declines that could be largely attributed to the rideshare companies.

And a little bit of increases in fares on transit systems was also hitting transit ridership.
Story continues
And then COVID hit.

What happened during COVID was a lot of the people who rely on transit on a day-to-day basis – those critical workers, folks who were keeping our society going during the early parts of COVID – they still had to get to work. And many of those folks are bus riders as opposed to rail riders, because of the way we’ve set up these systems. And so we saw bus ridership decline, but it was still at significant portions of what it was before COVID.

Rail, on the other hand, was decimated, especially commuter rail. Most commuter rail agencies are even still today nowhere close to what they were pre-COVID. In the early days of the pandemic, they were at 10% of the ridership levels that they once were.

We’re seeing some agencies, like Los Angeles Metro, where they’re predicting that in the next year or two, they’re going to be back up to the levels that they were pre-COVID. But there’s a lot of cities that have been permanently hit, such as San Francisco and New York. Why are some transit agencies facing a ‘fiscal cliff’?

Kari Watkins: What happened during COVID was that many of these agencies were rescued through government programs where they got extra operating funds because the federal government and state governments knew that these agencies were going to be facing such dramatic declines in ridership that they wouldn’t be able to provide their services without some sort of extra support. But all of that extra operating funding is disappearing over time. And with some agencies, they expect it’ll last another year, maybe two, but they’re not sure if their ridership is projected to be back at the same levels that it once was.

How could transit become more environmentally friendly? Kari Watkins: There’s actually a lot that can be done to our system if we electrify transit further. For decades, we’ve had transit lines that had overhead systems to power it, or a third rail system, where it’s powered from underneath, like our subway systems.

All of those are really expensive to build. But battery technology that is coming around for our passenger vehicles is also coming around and improving greatly for larger-scale vehicles, such as trucks and buses. This gives us the ability to start to electrify routes that are running on pavement in streets.

The hang-up is simply that we have to run these routes for an entire day and the window to charge them is just a small window overnight. Watch the full interview to hear more about public transit. SciLine is a free service based at the nonprofit American Association for the Advancement of Science that helps journalists include scientific evidence and experts in their news stories.

This article is republished from The Conversation, an independent nonprofit news site dedicated to sharing ideas from academic experts. It was written by: Kari Edison Watkins, University of California, Davis. Like this article? subscribe to our weekly newsletter.

Kari Edison Watkins is an Associate Professor for the University of California at Davis and has received funding from the US Department of Transportation, the Transportation Research Board, the National Science Foundation, and multiple state and local agencies.