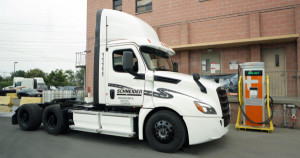 Throughout VERGE 22, I found myself having very similar conversations with leading multinational companies about decarbonizing transport emissions. The talks typically sounded something like this:

Supply chain and automotive delivery constraints are also real, but that will hopefully resolve itself as time goes on.

At times, it felt like my energy was attracting companies who faced the same challenge regarding their Scope 3 transport emissions because I was hearing the same thing over and over again — a classic “my company’s Scope 3 is some other company’s Scope 1” conversation. Interestingly enough, Schneider kept resurfacing during those conversations. The Wisconsin-based company is one of the larger third-party logistics and carrier companies that many Fortune 1000 companies rely on when moving their products.

Interestingly, as we hear more these days, charging infrastructure for heavy-duty vehicles is more important than the vehicle itself.

I was interested in following up with Reich, namely for two reasons:

Our conversation touched on many areas of heavy-duty decarbonization, covering details about the company’s new electric trucks, charging infrastructure, the Tesla Semi, planning for fleet decarbonization and of course, policy — namely the California Advanced Clean Fleet rule. One thing that wasn’t news to me, but still struck me during our conversation, was how important it is to plan for charging infrastructure.

Interestingly, as we hear more these days, charging infrastructure for heavy-duty vehicles is more important than the vehicle itself. Reich shared that, in speaking with company customers, if the customer wants more electric trucks to address their Scope 3 emissions, then the customer needs to start that conversation with Schneider 18 to 24 months in advance in order to ensure infrastructure is in place.  Given the length of my conversation with Reich, and how helpful it was to dive deeper with him, we have decided to publish the full interview, edited for length and clarity.

Vartan Badalian: What are some of the newest details transpiring over at Schneider in terms of electrifying your fleet?  Rob Reich: Well, we’re taking delivery of our first eCascadia trucks in January 2023, a project we’ve been working on for a while. The biggest component of the project, of course, was the JETSI funding we received.

So that’s for 50 trucks in our intermodal operations in El Monte, California. So the majority of the trucks with that initiative at our intermodal facility will be electric. That’s the primary project that’s been driving all this.

We will start to have trucks delivered in January, but there have been lots of delays that we’ve dealt with, relating to supply chain challenges over the last two years, so we’re a little behind schedule. But, we’ll start to see trucks in January, and we’ll have the charging system in place in February, which is when we’ll really start the operation fully.  We also anticipate that by the middle of next year, we’ll have 62 battery electric vehicles, all eCascadias, running out of the El Monte facility.

Also, we have received some additional funding out of California, and so we’ll be adding 30 additional trucks as the year progresses, and so we anticipate 92 battery electric vehicles in our Southern California fleet by the end of next year. Badalian: What is the eCascadia’s range, and what’s the actual route that you’re planning to use these vehicles on?  Reich: The anticipated range is 220 miles. …They’ll be running in our intermodal drayage operations in California — so all around Southern California picking up and delivering containers for intermodal.

So, [there’s] obviously a very dense population there and dense from a customer standpoint, so a wide variety of routes in and around the Los Angeles area. Badalian: Since you are receiving these vehicles, starting in January, you must have done a significant amount of planning to get to this point. What have you learned about heavy-duty fleet electrification?

Reich: I think the biggest learning has been on the charging and infrastructure side. … We’re a trucking company, so we know how to deploy trucks. This is a new technology, but we’re very comfortable learning new truck technology and getting ready for that.

However, it really has been about the time and the planning required to get the charging infrastructure in place since, and this is something we haven’t done before.  And so, working with all the appropriate partners there, it’s taken longer than we thought and that’s been the other lesson as we think about where else we might deploy EVs. We better be planning on that [new EV deployments] 18 to 24 months-plus in advance.

Whereas today, if you’re going to deploy some new diesel, somewhere, you order the trucks and off you go; you don’t have that significant time that you have to think about.  … So as we talk to our customers who are interested in EVs as part of their sustainability initiative, we’re telling them, “Hey, we got to be talking now, if you want to do it two years from now.” So that’s been a great lesson that we’ve taken away.

Badalian: A lot to unpack there on the charging piece — what’s the charging infrastructure you are deploying?  Reich: The charging stations are 350 kW charging. We’re putting in four power cabinets.

So that’s about 4 1/2 megawatts of the total power required. Each power cabinet supports four charging posts. And then each post has two charging cables.

Now the trucks are designed with two ports. So in most cases, when you charge the truck, you’re going to plug two cables into it so that you get that faster charging. You can also do just one if you want.

Badalian: Do you ever see a future where your company customers, these major brands, will support you in developing infrastructure so that they can accelerate their Scope 3 endeavors?  Reich: I think that’s possible. Those are the early conversations we’re having, but I don’t know if it’s our infrastructure.

I believe that for many customer solutions, they’ll have charging at their locations. Because you think about it with a shorter-range day cab, these trucks are going to charge where they park. And in many cases, like with a dedicated account, and especially a shorter-haul-type operation, the trucks are parked, often at the customer location.

That’s really a home base for those trucks. And so if that’s the case, then I do believe that customers that are interested in this, you’re gonna have to look at, “Oh, hey, if I want to have the ability to bring in electric trucks, I’m going to have to charge on-site.” And so I think that might be where they’re going to have to invest, in their own facilities. Badalian: In as much as you can share, I would love to hear your opinion on the Tesla Semi, as the company announced deliveries beginning on Dec.

1, with PepsiCo to receive the first orders. Any thoughts to share? Reich: We’ve got some trucks on order with Tesla.

So we’re excited to see what that truck can deliver. But until we have them, we don’t know. And of course, it’s been a while since they announced the truck.

What are you doing to support your company customers? Reich: We actually had customers in town this week [two weeks ago]. That is exactly what we’re talking about.

We’re educating them on what we see the fleet equipment to look like; we want them to understand the project out in California and how it’s not just a learning opportunity for us, but it’s a learning opportunity for all of our customers as well. We believe we’re here and in a really good position, given what we’re doing in the industry, to educate them and help plan with them. And obviously, we’ve set nice sustainability goals for ourselves; we want them to be aware of that, because to your point, we know our goals will impact their ability to hit their goals as well.

Badalian: So what are your top-line commitments?  Reich: Yeah, we’ve got two primary equipment-related goals. First, by 2025, we want to reduce our emissions per mile by 7 1/2 percent — most of that will come through just fuel efficiency and improving fleet operations.

And then our big goal is by 2035, to reduce our emissions by 60 percent per mile. We believe to hit that, you’ll see a sizable percentage of the fleet, particularly, it’s really what we’re doing now, with electrifying day cab type of operations.  Badalian: Shifting to policy, regarding the California Advanced Clean fleet rule, I’ve spoken to industry professionals on both sides, and certain individuals operating large-scale fleets believe that requiring 100 percent zero-emission truck sales by 2040 is just not possible.

Any thoughts? Reich: Well, I would line up with some of that feedback. While we were excited about all the opportunities, I think that’s [whether 2040 is possible] the great unknown, right?

There are elements of that plan that the manufacturers don’t know how they will meet. At this point, we’re talking about battery electric being a great shorter-haul solution. But obviously, there are plenty of things outside of that, that have yet to be determined.

So to me, your crystal ball is naturally cloudy when you look all the way out to 2040. But yeah, I have the same concerns even as we look at some of the 2024 and 2027 rules that have come out. I mean, there are elements of those rules that will be hard for the manufacturers to achieve. …

But I think you got to get started, right? That’s what we’re focused on. And that’s why we’re so excited about what we’re doing in California.

Badalian: Final question — on the other side, advocates believe that instead of 2040, that the timeline should be moved up to 2036 instead of 2040, pointing to findings saying that in 2035, the average ZEV truck will cost almost £50,000 less to operate over its lifetime than a combustion engine truck.  Reich: Yeah, well, you can really debate operating costs. What we know today is that the battery electric truck costs about three times as much as a diesel truck.

So you’ve got to start there. That has to normalize over the next five to six years for this to work economically. So today, I would be a little cynical about saying that, you know, that zero-emission vehicle would be that much less expensive to run because that’s just not the case today.

However, we know that as technology advances, costs tend to come down. We’re, again, just getting started. We’ll learn a lot about that [costs] over the next three to four years, as we see the technology improve, and the costs start to come down, and then we will learn what the operating characteristics are.

So for example, we know that charging the truck will have a significant impact on the overall total cost of ownership. Again, that’s the purpose of this program, to learn best practices, and charging practices, so that we can maximize efficiency and lower the overall cost of ownership of the truck. But we have to see technology improve, and the initial costs come down for us to have any chance of having a truly lower cost-per-unit versus what we have today.

Sign up for Transport Weekly, our free email newsletter.]