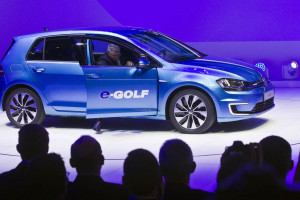 Volkswagen, the German carmaker that’s pledged to manufacture nothing but electric vehicles in Europe by 2035, now says it’s “practically unviable” to build the batteries they need domestically. That’s according to Volkswagen CEO Thomas Schafer, who wrote on LinkedIn this week that “Unless we manage to reduce energy prices in Germany and Europe quickly and reliably, investments in energy-intensive production or new battery cell factories in Germany and the EU will be practically unviable.” Don’t worry, Herr Schafer, I’m sure that Communist China would be more than willing and able to cover your needs.

It takes a lot of energy to produce a lithium-ion battery large enough to power a car or truck, and Europe’s high energy prices drive up the cost of making the batteries that were supposed to reduce costs. Europe is enjoying record-high energy prices for a multitude of reasons. One is the effect on markets of the Russo-Ukraine War.

Another is the end of American energy independence, turning us back into a net importer of oil. Then there’s plain old inflation, driven by massive government money-printing to try and paper over the disastrous economic dislocations caused by unnecessary government lockdowns. (What government takes with one hand, it takes more of with the other.) But left unsaid by Schafer, or really any other Europeans of any importance, is the high cost and intermittent availability of the “renewable” energy sources Europe has made itself so dependent upon.

Energy prices in the UK and Germany spiked this week as the winds died down and the wind farms stopped spinning. Things are so bad in Germany that Berlin is preparing to impose a windfall profits tax on solar and wind generation. Just wait until I tell you why.

Take a deep breath and try to wrap your head around this. Europe has been closing nuclear plants and subsidizing wind and solar. Now they’ll tax wind and solar in order to “fund a EUR54bn consumer aid package.”

Subsidized wind and solar are too expensive, so Germany will tax it to pay for consumer subsidies on wind and solar. It takes a really big government to be that stupid. Here’s the situation in formerly Great Britain:

Over the last 40 hours, the UK wind power industry has swung from producing 16.4 GW to generating 0.4 GW

The drop in electricity production is equal to, give or take, switching off 14 nuclear power stations. That’s the reason why UK power markets are tight today. — Javier Blas (@JavierBlas) November 28, 2022

Blas went on to explain that “Intermittency is a well known downside of renewable energy.

Per se, it isn’t bad (as critics claim), but needs to be understood and addressed. Storage can help (currently, only via pumped hydro as everything else is too small).” Another way to store intermittent wind-driven energy for when the wind dies down (or solar on a cloudy day) is…

BATTERIES! Those same batteries that Europe’s green policies are helping to make “practically unviable” to manufacture in Europe. Remember when high costs for traditional energy sources like oil and natural gas were supposed to ease the transition to renewables?

That was awesome. It’s also apparently over, by the tacit admission of none other than the CEO of one of those “We Pledge to Go All-Electric Any Year Now” carmakers. Speaking of viability, Schafer sure does have an interesting definition of that word.

Here’s a pro tip for our European friends, and our so-called leaders in Washington, too: If an investment requires government incentives or subsidies, it isn’t actually viable.

Recommended: Elon Musk Bought Twitter, Now the Left Will Destroy Them Both