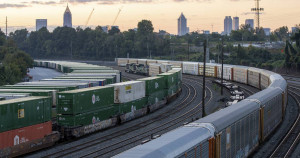 The United States is facing the prospect of a national rail freight strike next month after members of a key union rejected a deal over employment contract and terms.

Passengers could also be affected in parts of the United States as many commuter services operate over tracks that are owned by freight rail companies.

If a dispute is not averted in further talks, the US Congress could intervene and impose a settlement.

About 51 per cent of members of the International Association of Sheet Metal, Air, Rail, and Transportation Workers (SMART-TD) voted to reject a proposed new five-year collective bargaining agreement.

The union represents 28,000 conductors, brakemen and other personnel.

The White House had been closely involved in drawing up the proposed deal in September in a bid to avoid industrial chaos in advance of the midterm elections. US president Joe Biden had praised the proposals at the time as a win for both sides and the economy.

A number of other unions representing rail workers have accepted the proposed new agreement. However if rail conductors represented by the SMART union go on strike, they are unlikely to pass pickets.

The key sticking issue for the rail workers would appear to be points-based attendance policies that penalise staff for taking time off when they are sick or for personal time.

The proposed deal drawn up in September provided for a 24 per cent pay increase by 2024 and the introduction of flexibility for workers to take time off when they were hospitalised or to attend three routine doctor's appointments a year without penalty.

The proposal also included a single additional paid day off. At present conductors and engineers do not receive any paid sick days, but rail companies have said their attendance policy allows workers "to take time off when needed."

However, some rail staff argued that the proposals did not meaningfully change the points-based attendance policies that rail freight companies had introduced over recent years.

Union members contended these working arrangements had come at the expense of their health.

SMART-TD president Jeremy Ferguson said in a statement his members had spoken and it was now back to the bargaining table.

"This can all be settled through negotiations and without a strike. A settlement would be in the best interests of the workers, the railroads, shippers and the American people."

The National Retail Federation urged the US Congress to intervene immediately "to avoid a rail strike and a catastrophic shutdown of the freight rail system."

"Millions of hardworking Americans rely on the freight rail system for their jobs and the economic security of our country.

A nationwide rail strike during the peak holiday season will be devastating for American businesses, consumers and the U.S. economy."

"American businesses and families are already facing increased prices due to persistent inflation, and a rail strike will create greater inflationary pressures and will threaten business resiliency.

Congress must intervene immediately to avoid a rail strike and a catastrophic shutdown of the freight rail system."

An estimated 30 per cent of freight moves by rail in the US including food, fuel, chemicals and cars.

If there is no agreement reached by December 8th on the proposed employment contracts, workers could go on strike on rail companies could lock out the workers concerned.