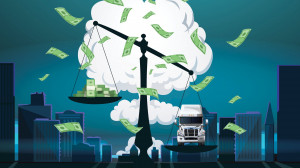 There’s a lot of freight to haul, and some would have the public believe that unsafe players haul most of it. Of course, there are still operators today that knowingly hire suspect CDL holders to operate 80,000-lb. machines that are old, poorly maintained, and still run a lot of miles. But this–in no way–represents trucking as a whole.

Yet this does sound like one of those side-of-the-road billboards, doesn’t it? With one broad brush, they help paint a caricature of a complex industry that struggles with a very expensive byproduct of this perception: “nuclear” verdicts. Injury and death occur in truck-involved accidents, despite current government goals of cutting this carnage down to zero–but that’s something safety directors, fleet executives, or anyone in orbit around the issue of nuclear verdicts hear regularly.

Many internalize safety. Most make their missions to do better, to not only put their drivers in training but to build whole programs with the goals of constructing “safety cultures,” preventing accidents, and staying well clear of plaintiffs’ lawyers, judges, and juries. See also: Best nuclear verdict deterrents: Fleet technology and planning

To most commercial carriers–the ones that invest a lot in and preach accident prevention, that hire safety people (sometimes several of them) despite ever-strained budgets, that carefully screen and train drivers to be good citizens of the road for sometimes millions of miles, and that invest heavily in safe-driving technology unheard of five years ago–this caricature hurts.  The numbers, however, are stark. In 2020, there were 4,444 truck-involved fatal crashes and 101,000 others that involved injuries, regardless of fault, Federal Motor Carrier Safety Administration data says.

Last year, large-truck-involved fatalities rose 13% and were the highest in almost 20 years, adds the National Highway Traffic Safety Administration–a statistic the government is using in its call to action to the freight-hauling industry and the public, its National Roadway Safety Strategy. More than 800 truck drivers were lost in those accidents last year, so fleets know full well the high stakes out there on the road for their employees as well as others. To prevent receiving the phone call no one wants, sources said the fleetwide mindset needs to be that absolutely nothing comes before safety: “The customer can wait.

Safety comes first–it can’t wait. That message needs to be real clear and must come from the top,” said Mark Murrell, co-founder of CarriersEdge, the online school and driver instructional material provider, and co-creator of Best Fleets to Drive For, an annual evaluation with the Truckload Carriers Association (TCA) of the best workplaces in North American trucking. Lumping the good players in with the bad galls people in trucking.

They point to the importance of the industry to the economy; it hauls about 70% of everything Americans need and want, they note. “Those bad apples put targets on all our backs, even the good ones,” said Dana Achartz, a fleet safety director at Belleville, Illinois-based Commercial Transport, echoing this indignation. But the misconceptions energize these same stakeholders to work harder at safety, advocate for it, and go out of their way to help polish an image that can appear tarnished in the eyes of a lot of Americans, fairly or unfairly. These caricatures are effective in one respect.

They’re used fully and profitably by plaintiffs’ lawyers, who have built a cottage industry in much of the U.S. by using the “reptile theory” and plugging clients into litigation financing to extract record verdicts against the trucking industry. (Last year alone, £1 billion from a Florida jury and £730 million from another in Texas.) Defendant carriers are being urged to combat the aggressive trial bar with something called “mongoose method.”   Numerous other smaller verdicts under £1 million are rendered every year. Escalating high-dollar settlements, deals made often to avoid the uncertainty of the trial process, are another problem and are extracted in some cases when carriers might–as a current small-fleet owner who happens to be a former trial lawyer pointed out–stand a better chance by taking their cases before judges and juries in their states, some of which one tort-reform group calls “judicial hellholes.”

See also: Protecting fleets from nuclear verdicts: The defense side Plaintiffs’ attorneys’ hands are in no way clean, either–as every source emphasized when FleetOwner interviewed them about trends in verdicts and settlements involving freight haulers. In response, millions have been spent lobbying and legislating on this topic in Congress and in statehouses across the U.S.

The issue disturbs the industry; lawsuit abuse reform came in at No.

10 in the American Transportation Research Institute’s (ATRI) 2022 ranking–just released in late October–of top industry concerns. In years prior, the issue ranked even higher. High-dollar verdicts and settlements are, of course, linked to insurance, the costs of which continue to skyrocket.

This pileup comes at a time when trucking can least afford it. Inflation, a looming recession, still-sky-high diesel and gasoline prices, and a balky supply chain are causing enough problems, industry stakeholders said. The mention of nuclear verdicts gets their blood boiling.

Two reports released in 2020 and 2021 by ATRI, one on large verdicts and the other covering smaller judgments and settlements, and the 20-year ongoing “Judicial Hellholes” report from the American Tort Reform Foundation (ATRF) provide ammunition for their counterattack. State trucking associations and their staffs and leaders–FleetOwner spoke to some from Florida and Texas; their court systems and legal environments are identified by ATRF as “hellholes”–also do a lot of work to bring these issues to the fore before Congress and their state legislatures, with some success of late. An article from the Florida Trucking Association’s (FTA) website sets their terms of engagement: “A war is being waged, targeting the trucking industry.

Just look on any road in the state, with billboard after billboard advertising big payouts for an accident involving a truck.”

“How much money is arbitrary, how much money is a valid dollar amount, and how much is just pulled out of the sky?” FTA President and CEO Alix Miller asked, echoing the state-level exasperation. “There are other consequences to nuclear verdicts and inflated settlements,” Miller added. “They drive up insurance rates, divert money away from increasing companies’ workforce, can delay purchasing new trucks and safety technologies. Ultimately, this affects everyone: the health of the economy, the supply chain, and cost to transport all of the goods we use.”

Florida is ranked No.

1 by the U.S. Chamber of Commerce among states per-capita for nuclear verdicts, though Texas ranks highly for large judgments against trucking specifically. This stands in contrast to other facts Miller cited: Florida also is a state that, because of its geography and other factors, depends heavily on trucking.

According to ATRI, 85% of Sunshine State communities rely exclusively on goods moved by trucks. “One thousand people are moving here per day. We’re a consumer state; we need a lot of stuff,” Miller said. “Florida is a flashpoint for these issues right now.

We don’t need special treatment. We just need to level the playing field. Everyone deserves their day in court.”

See also: Trucking continues battle against reptile theory, nuclear verdicts Miller sits on American Trucking Associations’ legal reform committee and said she spoke behind closed doors about the litigation landscape to stakeholders who joined ATA’s late-October Management Conference & Exhibition in San Diego. ATA strongly advocates for tort reform in large part because of the wave of nuclear verdicts, which are generally those over £10 million, but also the numerous smaller ones that have enormous cumulative effects. High-profile and much larger verdicts in the last two years involving freight haulers have been so high that the whole industry is still talking about them–but many of these cases don’t even involve the fault of truck drivers or commercial carriers.

A Florida jury last August ruled that two trucking companies and their drivers were complicit in the 2017 death of an 18-year-old honor-roll student, awarding the family of Connor Dzion a civil judgment of about £1 billion, split between compensatory and punitive damages. This is believed to be the highest judgment ever involving a freight hauler, though it could be reduced on appeal. Dzion, on his way to college, was stopped on Interstate 95 near Jacksonville.

Ahead of him, an 18-wheeler operated by a truck driver–later found to be without a CDL and distracted from using a cellphone–for Staten Island, New York-based AJD Business Services had crashed into another vehicle and was on fire, halting traffic. Dzion, sitting in his car waiting for the wreck to be cleared, was killed when another rig, driven by Kahkashan Carrier Inc., a Canadian operator, slammed into the parked line of cars behind the wreck. The jury found the Kahkashan Carrier driver to be fatigued; he had driven for 25 hours prior to the crash, reports said.

“It’s an absurd thing to even attempt to collect,” Nick Saeger said when asked about the whopping Florida verdict last year. “That will be reduced on appeal.” Saeger is an insider on nuclear verdicts as assistant VP for transportation pricing and products at Sentry Insurance, a major policy writer for trucking. “Insurance companies see large verdicts [and] liken them to a catastrophe,” he added. “You never know which one is going to level an insurance company.” See also: Deciphering the calculus of trucking insurance

Stakeholders such as Saeger and others inside and outside insurance generally extol the virtues of onboard outward-facing and inward-facing cameras because they can exonerate drivers. But a dashcam recorded the entirety of a February 2016 crash that resulted in the death of East Texas 73-year-old great-grandmother Toni Combest and another extra-large verdict, last year’s £730 million in compensatory and punitive damages from a jury in Mount Pleasant, Texas. The tractor-trailer involved in that oversized-cargo accident, hauling a propeller for a U.S.

Navy nuclear submarine, veered into oncoming traffic on a local two-lane road in Titus County, sheering off the roof of Combest’s car and causing a fatal injury to her head. The jury found the drivers of the pilot cars on the scene also were liable for the accident, but the commercial carrier, Landstar Ranger, an operating company of Landstar System, which is No.

10 on the FleetOwner 500: Top For-Hire Fleets of 2022 list, shouldered £50 million of the liability in a pretrial settlement. Landstar Ranger had been involved in a £15 million verdict in 2014 that is viewed as one of the all-time largest motorcycle-accident judgments in Florida judicial history.

Safety awards not a shield from large judgments

The contradiction that comes up is this: Landstar has won numerous safety awards (another subsidiary of the company, Jacksonville-based Landstar Inway, was a third-place TCA Fleet Safety award-winner in 2019 in the division for fleets that run 100 million or more miles per year).

It operates an in-house safety awards program, employs safety and technology executives known for longtime excellence, and even rewards its owner-operators for their safety records and professionalism. Landstar also landed in the top 20 this year as one of the Best Fleets to Drive For. “There’s an appetite for doing something about nuclear verdicts finally,” said John Esparza, president and CEO of the Texas Trucking Association, which backed Texas House Bill 19 that went into effect in September 2021.

The law provides significant procedural changes to trucking-related lawsuits that can cut the size of verdicts. “As reps of the industry, we can talk about things all we want,” Esparza added. “Often, we’re the canary in the cave that says something. It becomes an ‘everybody problem’ once you make it an everybody problem.

When it comes to tort reform, the legislature has exercised its appetite for doing something after many decades. These trial lawyers will try to figure out how to back-door policy in a way that benefits them. Unfortunately, for us here, they’ve moved onto trucking.”

“It’s a lottery ticket for plaintiffs and their lawyers,” Esparza continued. “They set up an LLC and take this so far. It’s matter of who stands to win, when these cases come through. That’s how bad it’s gotten.

This is the first part of a three-part series.

Stay tuned for parts 2 and 3 on FleetOwner.com.