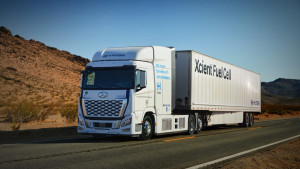 Like a political candidate running unopposed, Hyundai Motor will passively assume U.S. leadership in hydrogen-powered fuel cell trucks next year when 35 Xcient models arrive in California. Hyundai has competition in the zero-emission trucking space. But none is likely to match the South Korean automaker.

It has worked on fuel cell technology since 1998. And it and fielded its first fuel cell vehicle, a 160-kilowatt bus, in 2005. The Xcient essentially doubles the 90-kW fuel cell stack technology in its Nexo fuel cell SUV.

The 180kW is capable of powering a heavy-duty truck. A 72-kilowatt battery effectively makes the Xcient a parallel hybrid. It can run on pure electricity or hydrogen.

The approach is similar to the GenH2 heavy-duty truck from Daimler Truck and its cell-centric joint venture partner Volvo Group.

The Xcient has amassed more than 3 million miles of real-world use in Switzerland, where 47 of the trucks have been running for two years. They are now being introduced in Germany. Both countries offered subsidies to offset the cost of the technology. Hyundai will deliver 30 Xcients — the largest commercial deployment of Class 8 hydrogen fuel cell electric trucks in the U.S. — to the Port of Oakland in the second quarter of 2023. Five more will follow in the third and fourth quarters in the Los Angeles area, subsidized by a £3.5 million U.S.

Environmental Protection Agency grant. One Xcient being tested in Ohio will be shipped to California soon, a Hyundai spokesman said.

“It sure looks like Hyundai is putting their money where their mouth is, and it seems very promising that they are going ahead with 30 units right off the bat, plus some more in Southern California to follow,” Antti Lindstrom, principal analyst, global medium and heavy truck research for S&P Global Mobility, told FreightWaves. “It’s a strong step forward for them, and should bring about credibility for hydrogen to others as well,” Lindstrom said.

The Xcient will compete with the Nikola Tre Class 8 hydrogen fuel cell, expected to be delivered to customers in the second half of 2023. Nikola customers Anheuser-Busch InBev and Total Transportation Systems Inc. have tested early versions of the Tre.

TTSI also conducted a 30-day test of a Freightliner Cascadia. It was upfitted with a fuel cell from Hyzon Motors. Hyzon, a spinoff of Singapore-based Horizon Fuel Cell Technologies, set up headquarters in Rochester, New York, in 2020 and went public via a merger with special purpose acquisition company Decarbonization Plus Acquisition Corp. in July 2021.

It faces a Securities and Exchange Commission investigation spawned by a short seller’s report that Hyzon lied about a large order of fuel cell trucks in China. Hyzon cited financial irregularities discovered in an internal investigation. And it failed to file required financial reports for the last two quarters.

That places its Nasdaq listing in jeopardy.  Nikola is running short on cash and Hyzon’s setbacks allow Hyundai to breeze into leadership in the U.S. market, abeit a small one. Battery-electric trucks attract most attention and early orders in the transition to zero-emission trucking.

Toyota fielded an experimental fleet of 10 hydrogen-powered T680 Kenworth models retrofitted with twin fuel cell stacks used in the Toyota ts Mirai fuel cell passenger car. The Zero- and Near-Zero Emissions Freight Facilities “Shore to Store” project ended in August. Toyota plans to build fuel cell systems for trucks at its plant in Kentucky beginning next year. But it has not announced a successor program to its work with Kenworth, subsidized by California.

“Hyundai’s been doing fuel cell stuff for quite a long time now and they seem very committed to it,” Abuelsamid said. “They’ve had these trucks running in South Korea, in China, in Europe and now North America.”