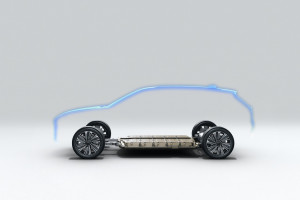 VinFast VF 8 EVs are on the way to the U.S. Caterpillar makes a very, very large electric truck. And GM points to what Ultium electric sedans might look like.

This and more, here at Green Car Reports.

GM has already shown a range of Ultium-powered crossovers, trucks, and SUVs; but in the Chevrolet FNR-XE Concept EV revealed last week, it provided a first look at how the platform may translate (in China) to mass-produced passenger cars–in a flowing sedan that appears to carry over some of the same design attributes as the £30,000 Chevy Equinox EV.

Vietnam’s VinFast has reported that the first lot of 999 VF 8 electric SUVs are bound for the U.S.–and delivery by the end of December. It will be followed by the larger VF 9 early next year, according to the company.

Sign up to get the latest green car and environmental news, delivered to your inbox daily!

I agree to receive emails from Green Car Reports.