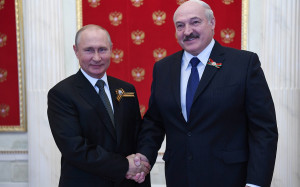 The Canadian foreign ministry said some of these officials were "complicit in the stationing and transport of Russian military personnel and equipment involved in the invasion of Ukraine," according to Reuters.

Canada has sanctioned more than 60 members of authoritarian leader Alyaksandr Lukashenka's regime, Belarusian oligarchs, and others for their involvement in the Russian invasion of Ukraine.https://t.co/Gc1gjlBFXJ

Canada has imposed steep financial penalties on Russia for its war in Ukraine, during which Moscow has used Belarus as a staging ground, Reuters reported.

Since Russia invaded Ukraine on February 24, the government of Prime Minister Justin Trudeau has imposed sanctions on more than 1,500 individuals and groups, including from Belarus, according to the Canadian foreign ministry.