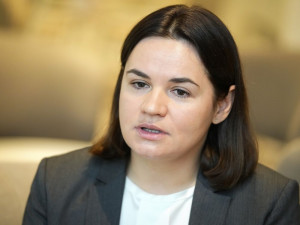 OTTAWA -- Foreign Affairs Minister Melanie Joly is announcing new sanctions on Belarus today in response to its support for Russia's war on Ukraine.

Joly says in a statement that Belarusian leadership is enabling human-rights violations and allowing the country to serve as a launching pad for Russia's attacks.

Joly says the two intend to discuss the complicity of President Alexander Lukashenko's regime in the war and the importance of upholding democracy in Belarus. Lukashenko came to power in 2020 elections widely considered to be fraudulent. Tsikhanouskaya, the main opposition challenger, fled to Lithuania after the vote under official pressure, and the government unleashed a sweeping crackdown on protests, arresting more than 35,000 people.

"President Lukashenko's complete disregard for human rights, both domestically and abroad, is unjustifiable," Joly's statement says. "These measures will exert further pressure on the Belarusian leadership. President Lukashenko must cease being an instrument of the Russian regime."

-- With files from The Associated Press.