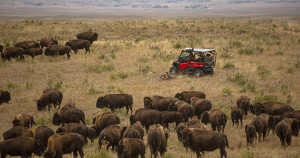 BADLANDS NATIONAL PARK, S.D. -- Perched atop a fence at Badlands National Park, Troy Heinert peered from beneath his wide-brimmed hat into a corral where 100 wild bison awaited transfer to the Rosebud Indian Reservation. Descendants of bison that once roamed North America's Great Plains by the tens of millions, the animals would soon thunder up a chute, take a truck ride across South Dakota and join one of many burgeoning herds Heinert has helped reestablish on Native American lands. Heinert nodded in satisfaction to a park service employee as the animals stomped their hooves and kicked up dust in the cold wind.

He took a brief call from Iowa about another herd being transferred to tribes in Minnesota and Oklahoma, then spoke with a fellow trucker about yet more bison destined for Wisconsin.