10% of freight cargo shipped to East Coast will ‘remain there permanently’: Analyst 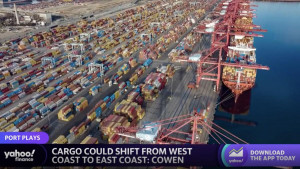 DUBAI (Reuters) -Dubai's main airport has raised its passenger forecast for this year by 1.5 million to 64.3 million after passenger traffic nearly tripled in the third quarter from the same period last year, the CEO of the airport's operator said on Tuesday.