Toyota Motor North America and Kenworth Truck Company said they have proven the capabilities of their jointly designed heavy-duty, Class 8 fuel cell electric vehicles (FCEVs) as a potential zero-emissions replacement of diesel-powered trucks with the completion of their operations in the Zero- and Near-Zero Emissions Freight Facilities (ZANZEFF) "Shore to Store" project at the Port of Los Angeles, the Los Angeles basin and the Inland Empire. (Earlier post.) 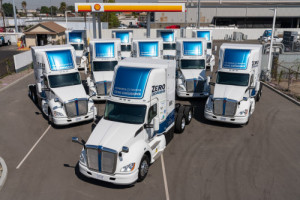 The primary goal for Toyota and Kenworth's participation in the project was to match nearly the performance of diesel-powered drayage trucks while eliminating emissions to provide a sustainable solution in heavy-duty transportation.

The baseline for the Toyota-Kenworth T680 FCEV truck--codenamed "Ocean"--was a 2017 diesel engine operating about 200 miles a day. The T680 FCEV has a range of about 300+ miles when fully loaded to 82,000 lbs. (GCWR), and with no downtime between shifts for charging and the short 15- to 20-minute fill time, the FCEVs could run multiple shifts a day and cover up to 400 to 500 miles. Kenworth designed and built the Class 8 T680 FCEVs, while Toyota designed and built the powertrain's fuel cell electric power system powered by hydrogen.

The Ocean trucks reduced Greenhouse Gases (GHG) by 74.66 metric tons of CO2 per truck annually compared to the baseline diesel engine. The success of the 10 trucks in serving real-world customers was a result of close collaboration among diverse project members, including Kenworth and Toyota, The Port of Los Angeles as the project lead, Shell for hydrogen fuel infrastructure and a grant from the California Air Resource Board (CARB). The program paves the way for further development and commercial opportunities for hydrogen-powered fuel cell electric transportation in California and beyond.

Though officially concluding their duties in the ZANZEFF "Shore to Store" project on 5 August 2022, some of the trucks will remain in use as demonstration or working models, including one that will continue supporting Toyota operations in the lower LA Basin. Although the overall ZANZEFF project is anticipated to conclude later this year, the recently concluded "Shore to Store" project funded under ZANZEFF was proposed with support from Toyota, Kenworth and Shell and funded with a £41-million grant awarded by CARB. "Shore to Store" provided one of the largest real-world, proof-of-concept test cases to show the practical application of hydrogen-powered fuel cell technology at scale in a framework for freight facilities to structure operations for future goods movement from the "Shore to the Store" in the world.

The 10 "Ocean" trucks for this project were operated by customers, including, among others, Toyota Logistics Services, Total Transportation Services, Inc. and Southern Counties Express. With the completion of this project, the door is now open for the technology to be adopted more widely for use in other heavy-duty applications, including increasing use of heavy-duty trucks in commercial transportation. Shell contributed to the project by building a total of three hydrogen stations (two ZANZEFF and one additional in the operating region), the first public provider in California to fuel heavy-duty trucks.

With the set routes for the trucks' drayage operations, the stations were regularly used, providing quick refueling to keep the trucks in operation.