I drove away from man serving abortion case subpoena because of recent attacks on conservatives, Texas AG Ken Paxton says: Slams 'ridiculous' media coverage because he feared for his safety

A process server who tried to deliver a legal document to Texas AG Ken Paxton said the state's top law enforcement officer ran from his house and jumped into a truck being driven by his wife to avoid being served with a subpoena.

According to a court document, the process server waited at Paxton's home for an hour after telling his wife Angela, a state senator, the purpose of his business.

Then, he says Paxton 'RAN' from his home and got in a truck that his wife had started in advance.

The AG, who was indicted on securities fraud allegations years ago and survived a primary challenge in May, blasted a report in the Texas Tribune about the incident, and gave no indication he was trying to avoid being served.

He attacked the media and said he was trying to avoid a 'stranger lingering outside my home,' while citing security threats faced by conservatives.

'This is a ridiculous waste of time and the media should be ashamed of themselves. All across the country, conservatives have faced threats to their safety -- many threats that received scant coverage or condemnation from the mainstream media,' Paxton tweeted. 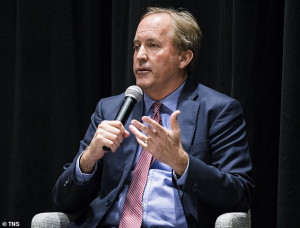 Texas AG Ken Paxton said he was trying to avoid a 'stranger lingering outside my home' when he avoided a man trying to serve him a subpoena in an abortion case, and cited security threats faced by conservatives

'It's clear that the media wants to drum up another controversy involving my work as Attorney General, so they're attacking me for having the audacity to avoid a stranger lingering outside my home and showing concern about the safety and well-being of my family,' he wrote in a subsequent tweet.

He the server trying to deliver a subpoena to appear in a court hearing for an abortion lawsuit related to the state's abortion laws. 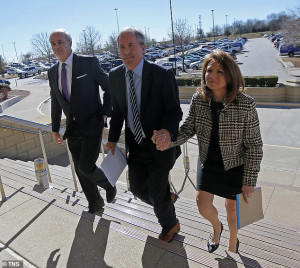 A process server writes in an affidavit that a woman who identified herself as Angela told him Monday morning that Paxton was on the phone. She then started a black truck and left a back door open, before Paxton later jumped in. Here Texas Attorney General Ken Paxton, center, arrives at the Collin County Courthouse with his wife Angela 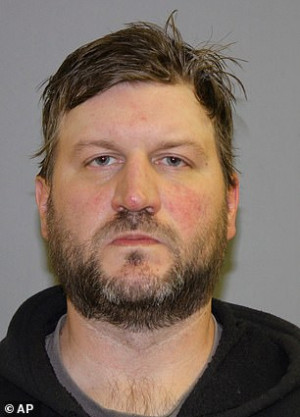 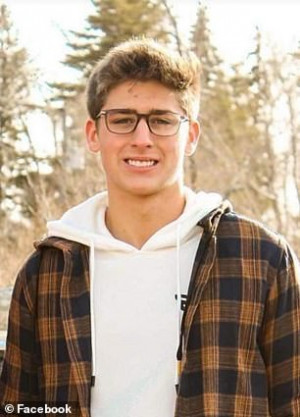 Paxton was indicted in 2015 on securities fraud charges but has yet to stand trial. Paxton pleaded not guilty. He led an effort by state AG's in a filing that sought to overturn the 2020 election.

Paxton was being served in connection to a Texas abortion case

Herrara writes that he arrived at Paxton's home Monday morning, and saw a 'silhouette of a man' walking in the living room. When he saw the server 'he turned around and went back to where he came from.' He recognized the man as Paxton, he wrote in an affidavit filed with the U.S. District Court in the Western District of Texas.

The woman who answered the door, who identified herself as Angela, said Paxton was on the phone.

About an hour later, he saw Paxton exiting the garage.

'I walked up the driveway approaching Mr.

Paxton and called him by his name. As soon as he saw me and heard me call his name out, he turned around and RAN back inside the house through the same door in the garage,' Herrera wrote.

'A few minutes later I saw Mr. Paxton RAN from the door inside the garage towards the rear door behind the driver side.

I approached the truck, and loudly called him by his name and stated that I had court documents for him. Mr. Paxton ignored me and kept heading for the truck.'

'After determining that Mr.

Paxton was not going to take the Subpoenas from my hand, I stated that I was serving him with legal documents and was leaving them on the ground where he could get them,' the server wrote. 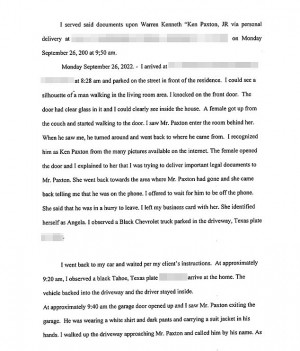 The process server said he stated he was trying to deliver important legal documents to Paxton, then stayed at his home for an hour

Texas Attorney General Ken Paxton speaks at a rally in support of President Donald Trump called the "Save America Rally" in Washington on Jan.

The case that brought the service involves nonprofit groups who assist women in obtaining abortions, after a state law allowed private individuals to sue someone who 'aids or abets' an abortion after six weeks of pregnancy, with a £10,000 reward that critics have compared to a 'bounty.'

State lawmakers crafted the language to navigate abortion protections, although the Supreme Court has since ruled Roe v. Wade unconstitutional.

Paxton did not cite specific attacks on conservatives, but on Sept.

18th North Dakota man Shannon Brandt struck and killed a teen Cayler Ellingson with his SUV, then later called 911 and said he believed Brandt was part of a 'Republican extremist group.'

Police investigating the incident said after interviewing witnesses that Brandt's claims have not held up.

North Dakota Highway Patrol Capt. Bryan Niewind said Friday the event 'is not political in nature at all.'

He added: 'There is no evidence to support Brandt's claim on the 911 call that Mr.

Ellingson was a Republican extremist.

There is no evidence to support that all through our continued investigation.'