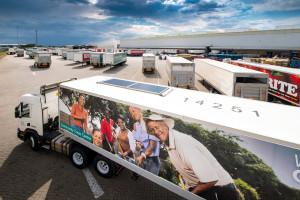 The Shoprite Group, South Africa’s largest retailer by market capitalization, sales, profit, and number of employees and customers, continues to grow its solar-assisted fleet of trailers. The Group now has 903 trucks and 1,360 trailers. Of these, 1041 trailers now have solar panels installed on the roof to support refrigeration loads.

This results in significant savings from the diesel that would otherwise have been burnt while idling to power the refrigeration units. Solar-powered units have been deployed in the Group’s fleet since 2017. This is part of the effort to reduce the company’s carbon footprint.

So far, Shoprite says 3,290 tCO2 have been saved from avoided diesel use by the solar powered fleet. The Group’s supply chain includes 29 distribution centers covering 673,843 m2, which the group says provides it with a competitive advantage in the retail industry to consistently deliver on its business promise of everyday low prices. The Group’s centralized supply chain enables greater efficiencies across its footprint.

Within this model, suppliers deliver to the 29 distribution centers, from which products are picked and dispatched to their stores. The total distanced traveled by their fleet during the past financial year was 89,037,646 km. The Shoprite Group transports a lot of goods on these routes.

For example, the number of cases of product delivered from the distribution centers to its stores in that period was 351,394,500. The Group employs 1,531 truck drivers. In terms of the energy used for the actual traction of these large trucks, the Group’s fleet is still powered by internal combustion engines.

However, the Group is closely monitoring developments in battery-electric truck as well as the hydrogen truck segments. Full battery-electric trucks that are able to cover the Group’s extensive routes across a large country such as South Africa are not yet widely available, and especially in right-hand drive. In the meantime, the Group is focusing on optimizing energy usage of its current fleet by incorporating solar panels on its roofs to support refrigeration loads, as well as other measures such as route optimization and driver behavior.

It is also moving its fleet to more fuel-efficient trucks. Recently, the Group acquired 100 Scania Euro V trucks that have a fuel saving of around 10%, along with lower CO2 and NOx emissions compared to older generation trucks that are part of their fleet. This is the first Euro V fleet in South Africa’s retail sector.

The Group is also optimizing efficiencies on its routes by ensuring that trucks return from these stores with some loads, as opposed to coming back empty. These loads include plastics and cardboard boxes for recycling. These back-hauling trips grew by 7.5% in the last year.

The trucking industry is a major contributor of emissions around the globe, which is why there has been so much excitement around the forthcoming Tesla Semi and other trucks. Volvo and Mercedes are also quite active in this space. We hope to see these electric trucks in this part of the world in the near future as the charging infrastructure grows around South Africa.

This will probably happen when large fully electric trucks that have the all-electric range and specifications to meet the needs of large companies such as the Shoprite Group, which operates in 11 African countries, become more available. The Group has more than 2,900 stores across Africa. Some of the Shoprite Group’s famous customer facing brands include Checkers, Shoprite, USave, OK, and House & Home.

Consider becoming a CleanTechnica Member, Supporter, Technician, or Ambassador — or a patron on Patreon.

Sign up for daily news updates from CleanTechnica on email.

Have a tip for CleanTechnica, want to advertise, or want to suggest a guest for our CleanTech Talk podcast? Contact us here.