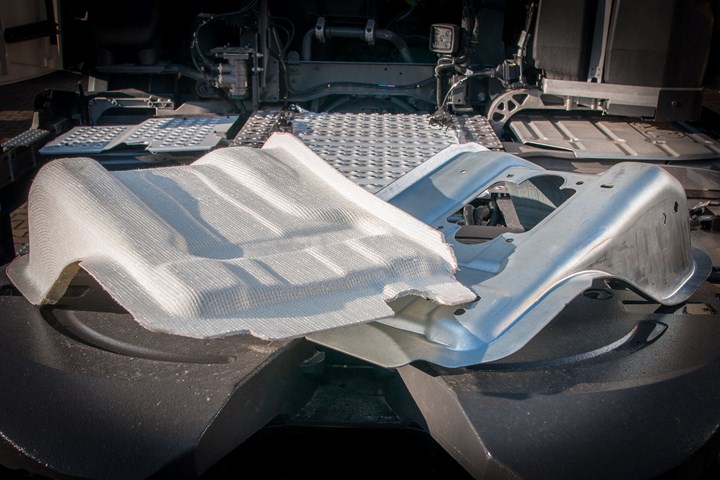 The MAPICC 3D project (2011-2016) realized a process capable of producing net-shape preforms from topology-optimized, high-performance structural 3D thermoplastic textile composites. The final product, a GF/PP Volvo truck seat reinforcement plate, was made in one shot using a knitting technique. At 1.3 kilograms, it weighs 2.7 kilograms less than its steel predecessor -- a reduction of 67.5%.

Photo Credit (above and in landscape image): Institute of Textile Machinery and High Performance Material Technology, Technische Universitat Dresden Heavy-duty vehicle (HDV) transport is the automotive sector's most prominent climate problem. To illustrate, in the European Union (EU), HDVs account for 22% of road vehicle emissions, though they represent less than 5% of the vehicles on the road.

To combat their effect on climate change, emissions legislators reduce the emissions targets for HDVs every few years, pushing manufacturers to develop cleaner technologies. The European Commission recently proposed a 15% CO2 reduction by 2025 compared to 2019, and a 30% reduction by 2030. It is a similar story in the U.S.

The California Air Resources Board recently finalized its HDV Low NOx Omnibus Regulation which phases in more stringent emissions standards starting in model year (MY) 2024; these standards will be updated again in MY 2027 to target a 90% reduction in NOx emissions by 2031. The U.S. National Highway Traffic Safety Administration and Environmental Protection Agency, which have had emissions and fuel efficiency standards for HDVs across the U.S. for over a decade, are poised to follow suit.

Lower emission powertrains such as hybrid and electric solutions, and exhaust gas treatment technology, generally increase vehicle weight. In addition, HDV gross weight and axle loads are limited by their class which further compounds the challenge of implementing these technologies. For example, for HDVs in the EU that weigh 18,000 kilograms when laden, every kilogram on the front axle above this weight means 3 kilograms must be taken off the payload to provide safe counterbalancing of the truck and the trailer.

In markets like Brazil and Australia, every kilogram above the front axle weight threshold requires 15-20 kilograms off the payload. 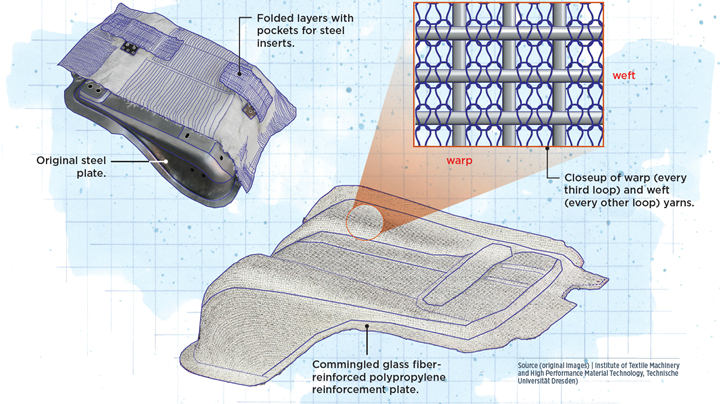 Image illustrated by Susan Kraus Composites provide a lightweighting opportunity for the HDV industry's weight issues, especially if they are structurally optimized to the given set of loads, boundary conditions and constraints to maximize the system's performance. A lightweight truck chassis could accommodate new lower emission powertrain solutions before it reaches a weight threshold.

This could also enable increased payload, so transport firms could haul more cargo, improve the transport economy and reduce the number of required journeys. 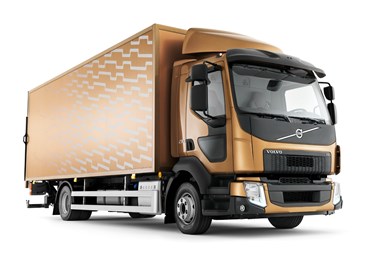 It sought to develop a process capable of producing net-shape, high-performance structural 3D thermoplastic textile composite preforms with topology-optimized fiber reinforcement orientation made in one shot using a knitting technique. The project included the development of virtual tools capable of modeling 3D composite structures and predicting their mechanical behavior according to textile architecture and resin choice, allowing for customized end products and better accessibility to SMEs/OEMs. It also saw the development of thermoplastic hybrid yarns comprising both matrix and reinforcing fibers.

The resulting composite part was to match the steel version's technical requirements, including the strength needed to pass the mandatory ECE R14 seat belt anchorage test for the N2 class vehicle, and realize significant weight savings.

RTU conducted finite element analysis (FEA) and simulated the ECE R14 seat belt anchorage test to acquire the loads produced during the experiment. Above is the resulting CAD and mesh with load vector map generated by these simulations. Photo Credit: Volvo Group Europe

Philippe Lefort, lead engineer for Volvo Group Europe, explained the rationale for choosing the seat reinforcement plate for the lightweighting study: "We developed a formula associated with the vehicle's balance to identify the location of the most effective weight saving. It determined that the weight reduction should be as far forward on the truck as possible for the largest axle load reduction. The seat reinforcement plate is close to the front, has significant high-performance design criteria and is reasonably heavy.

As such, it was the right challenge for this study." 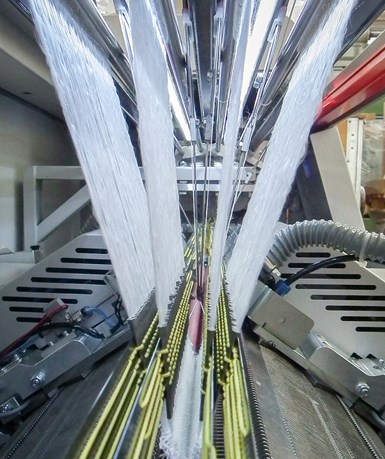 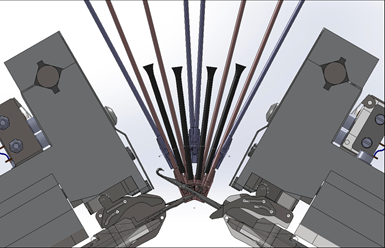 A load vector map generated by these simulations indicated that a single preform layer would not be sufficient to support some areas of the reinforcement plate well enough to pass the seat belt pull-out test. It was decided that extra layers of material would be placed in areas with the most severe stress. Steel inserts with a threaded section would be incorporated into the composite for bolting the seat to the reinforcement plate.

These inserts would fit into pockets knitted into the preform during the one-shot manufacturing process.

The chosen composite was a commingled glass fiber-reinforced polypropylene (PP) at a 50% volume fraction. "We produced our own hybrid yarn from separate glass fiber and PP yarns which we fed through an air jet texturizer, combining them at the chosen ratio," explains Wolfgang Truemper, scientific director at the Institute for Textile Machinery and Textile High Performance Materials Technology at TUD. "We align the glass fibers in the desired orientation in the hybrid yarn during the air jet texturizing, and the PP yarns support that structure. The glass fibers were orientated to provide load path optimization in the final composite structure. Additionally, this interspersion means the PP protects the glass fibers during fabric production and reduces the flow path length during molding. 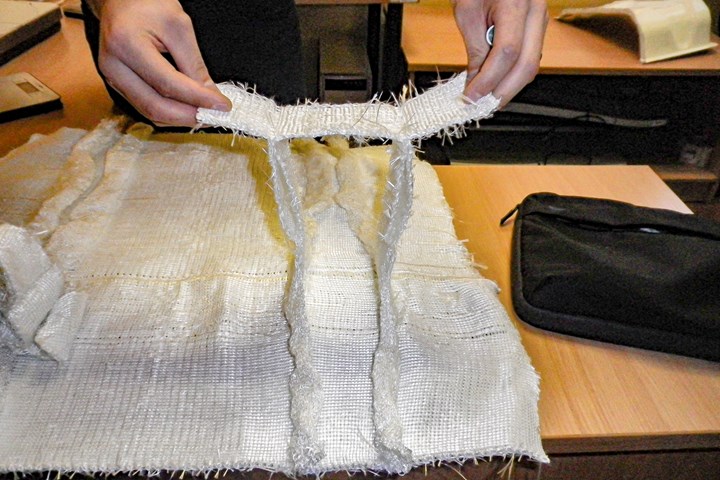 The fabric preform comes out of the knitting machine with all the desired part features.

As it's manufactured from thermoplastic hybrid yarns, only consolidation is needed before it heads into operation. Photo Credit: Institute of Textile Machinery and High Performance Material Technology, Technische Universitat Dresden

3D knitting enables one-shot production of preforms that accommodate the final product's net shape. Here, the knitted element is traditional in that the fabric comprises consecutive rows of interlocking loops.

Warp and weft yarns were woven through the knitted fabric at 90? to each other to reinforce the preform. A bespoke spacer knitting technology with controlled fiber placement was developed to locally knit pockets for the steel inserts and excess material to make multiple layers of foldable fabric where further reinforcement is needed. "An additional GF/PP yarn feed delivers adequate material locally during production," explains Truemper, describing how the yarn for the folded layers was integrated into the one-shot knitting process. "An extra needle set knits this feed into the main part to produce the insert pockets and foldable reinforcing layers.

The machine applies the foldable layers and pockets with a defined distance to the part's outer layers per the regional strength requirement. Afterward, the additional yarn feed is turned off until it is needed again." 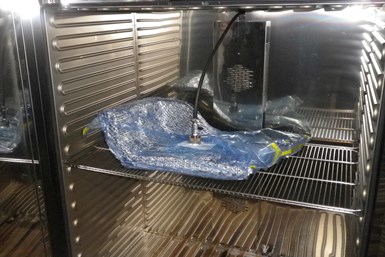 Consolidation took place in an autoclave (shown above) before being extracted and cooled at room temperature for several hours and then demolded. Photo Credit: Institute of Textile Machinery and High Performance Material Technology, Technische Universitat Dresden

RTU built thermally resistant molds based on Volvo's steel seat reinforcement plate. The preform was loaded onto the tool and vacuum bagged. Consolidation took place in an autoclave at 5 bar pressure.

The mold and preform were preheated at 170?C for 40 minutes, held at 180?C for 40 minutes and then cooled in the oven for 30 minutes. The mold and part were then extracted from the oven and cooled at room temperature for several hours before the consolidated part was demolded. Truemper explains the reasons for the lengthy cooling time are two-fold.

He says, "One was handling -- we needed to cool down the part to handle it safely without harming people and the other was to prevent warpage caused by cooling the part too fast." Being a prototype, the MAPICC 3D team didn't want to risk damaging the parts as each was valuable for the research goals. "We did not examine any cooling time influence on warpage," adds Truemper. "There was to be some optimization during the industrialization stage of the project to accurately define the temperature that enables detooling the composite part for each specific application." RTU tested several preform coupons to validate the final construction's mechanical properties. The university performed bolt pull-out tests on a one-quarter section of the composite seat reinforcement plate. "It was important to validate the construction because the digital model did not fully integrate the stresses at the interface between steel inserts and GF/PP structure," remarked Lefort. "The critical local load to pass the pull-out test was 23.2 kilonewtons, corresponding to the peak load the bolts would see during the seat belt anchorage test.

The test results showed that the composite reinforcement plate needed 4-millimeter steel inserts to achieve this. We chose this for the final structure with nuts and captive washers in addition to the steel inserts for extra support." 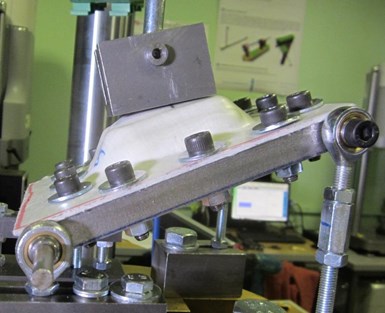 Sika Advanced Resins and Huntsman oversaw the adhesive bonding for affixing the composite seat reinforcement plate to the truck's steel cabin floor. The companies tested several types of adhesives from various chemical families with different stiffness and behaviors. PP is difficult to bond due to its low surface energy, so surface activation was needed to increase the adhesion.

Flame treatment was selected for this as it performed best in shear and intersection bond strength. The chosen adhesive was Sika's ADEKIT A280A. Volvo Group Europe tested the MAPICC 3D composite seat reinforcement plate in a truck cabin on a seven-actuator dynamic shaker rig.

Volvo bolted the seat to the reinforcement plate and loaded it with a total of 80 kilograms across the seat's shoulder and lap sections. Cables connected to an actuator pulled the weights forward in the cab during the ECE R14 seat belt anchorage test. Here, the main load interacting with the composite structure is a horizontal drag force.

The composite seat reinforcement plate surpassed the required N2 class 6.75-kilonewton load on the upper and lower torso without rupture, achieved 9.2 kilonewtons on the upper torso load and 12.3 kilonewtons on the lower torso load before observed failure. At that load, severe deformation of the seat rails led to complete adhesive rupture on the front of the composite seat base. The performance of the MAPICC 3D composite seat reinforcement plate in the ECE R14 seat belt anchorage test deemed the structure a successful replacement for the steel version. 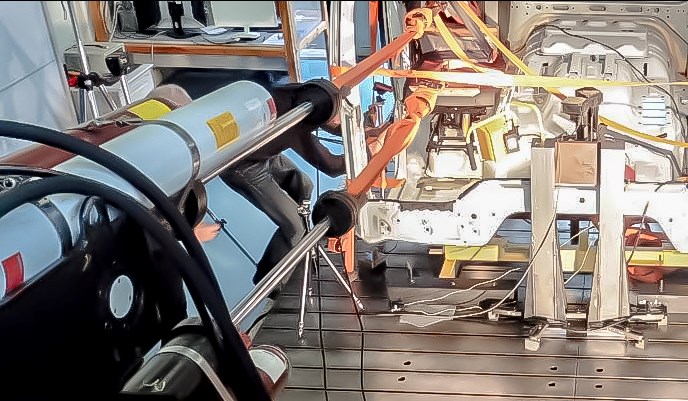 The seat was loaded with a total of 80 kilograms across the seat's shoulder and lap section while cables connected to an actuator pulled the weights forward in the cab. Photo Credit: Volvo Group Europe

The future of 3D knitted preforms

The final glass fiber-reinforced PP Volvo truck seat reinforcement plate weighs 1.3 kilograms, 2.7 kilograms less than its steel predecessor, for a total weight reduction of 67.5%. The MAPICC 3D technology achieved its goals of producing complex, production-ready 3D preforms with controlled three-directional fiber placement -- and with the potential to integrate third-party components -- in one shot.

The limitations associated with manufacturing preforms are significantly reduced and so, too, are the design limitations of the structures.

"Through this project, 3D knitted preforms from thermoplastic hybrid yarns consisting of the matrix and reinforcing components becomes a tool of significant economic output for vehicle industries," notes Pierre-Yves Bonvin, CEO of Steiger Participations, which developed the knitting machine for the MAPICC 3D project. "We can now accomplish hyper-specialized workshops and make 3D knitting a competitive composite manufacturing solution compared to other technologies that are slower, more expensive, polluting and wasteful."