A protester is led away from a HS2 protest last year [Simon Lamrock] HIGH-SPEED 2 has won a High Court injunction that blocks activists carrying out disruptive forms of protests, including "extreme tunnelling" and trespass along the new train's construction route between Euston and Birmingham. The ruling - which names a series of protesters - follows an application from HS2 Ltd and is backed by Liz Truss's Transport Secretary Anne-Marie Trevelyan.

The route-wide injunction makes it a criminal offence for anyone to enter what the company calls "HS2 land" without authorisation or to delay its operations using tactics including "slow walking" in front of its lorries. Lord Tony Berkeley, a Labour peer who lives in Bloomsbury, described the injunction as an "abuse of rights, and an abuse of the laws of the country and the HS2 Bill which brought it into being". The injunction has been sought in direct response to a protest in Euston Square Gardens in January and February last year where climate change activists dug and lived in a network of underground tunnels for several weeks.

Dr Larch Maxey in the tunnel under Euston Square Gardens last year The demonstration aimed to protect a series of trees being cut down in Euston by HS2, but the action also exposed the environmental damage being done to ancient woodlands up and down the line to Birmingham.

The group of activists later walked free from the court after a blunder by the prosecution led a judge to rule there was "no case to answer" -  but HS2's injunction is making sure it will not be allowed to happen again. Protesters had warned the injunction would "hammer another nail into the coffin of the climate crisis", that land and trees "should be nurtured" and "it was in the public interest to protest against HS2". But lawyers for HS2 said orders against "groups of unknown protesters to prevent trespass and nuisance had become common in recent times". 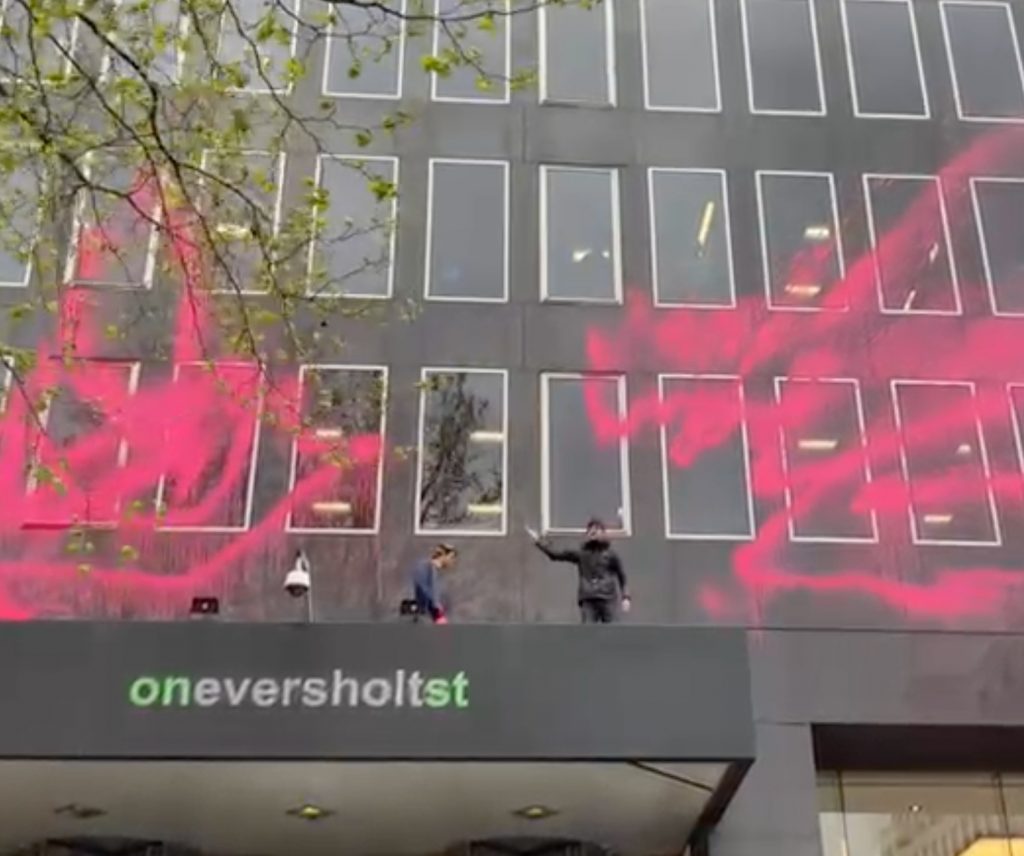 Protesters accused of painting HS2's HQ pink could go to prison After the injunction was granted, one of the Euston tunnellers, Dr Larch Maxey, said: "Is this the worst injunction ever?

It is against the right to protest and local communities. Is it because the public don't want HS2?" Shortly after being removed from the tunnel in Euston last year, Dr Maxey told the New Journal: "31 days in a tunnel is nothing compared to frying to death." Yesterday (Wednesday), he appeared at the Inner London Crown Court for a bail application hearing ahead of a trial due to take place on October 17.

Dr Maxey and Xavier Trimmer are accused of scaling HS2's head office in Eversholt Street and spraying it with pink paint in a separate HS2 Rebellion protest in May last year.
Around 20 supporters were at the court yesterday reminiscing about the Euston tunnels protest. Dr Maxey's son recalled how he had to abandon his tent at one point after 20 rats had moved in. The judge in the case warned Dr Maxey and Mr Trimmer they faced a custodial sentence if they broke conditions attached to their bail, adding: "Do be careful."

A spokesperson for HS2 Ltd said: "This injunction will not, and is not intended to, stop legitimate protest."

They added: "Instead, we hope the injunction will prevent the violence, intimidation, and criminal damage these protests have frequently caused, harming the HS2 project and those working on it, and costing the UK taxpayer millions of pounds."

They said the train project would get people "out of cars and off planes and onto zero-carbon rail travel".