Government should ‘get on’ with cutting HS2 funding says MP 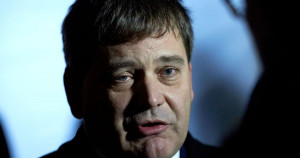 A Leicestershire MP has claimed the Government will cut spending on HS2. And the Conservative politician has urged them to "get on" with it after record falls in the price of the pound. Andrew Bridgen, the MP for North West Leicestershire, called on the Chancellor Kwasi Kwarteng to act now during Tuesday's edition of Radio 4's Today programme (September 27) as the impacts from Mr Kwarteng's mini-budget continue to be felt in the markets.

Despite the price of the pound falling to record lows against the dollar, the Leicestershire MP did not believe the mini-budget - officially called a fiscal event - had created the problems. However, the MP, who is an ardent opponent of HS2, believed the Chancellor could immediately help matters by slashing spending on the multi-billion rail project - one that led him to sell his then Appleby Magna home when it was under threat from the high speed train's route. READ MORE: Man arrested for drink driving after pedestrian suffers 'serious injury' in Coalville crash involving lorry

Speaking to host Martha Kearney, Mr Bridgen said the pound was struggling for other reasons. He said: "The reason the pound and the Euro are at record lows against the dollar is because of what's happened in Ukraine with Mr Putin, his invasion, and the Americans are seen, quite rightly by the markets, as being energy sufficient. "We haven't and had we been fracking two years ago we would have been in a better place.

What we need to do now is get on with fracking." Challenged on the pound's ongoing struggles, the Leicestershire MP, who also blamed the Bank of England for being "asleep on the job", said cutting spending on certain Government projects would help. Among them was HS2 which latest forecasts suggest it will cost more than GBP100 billion to build in full.

Leicestershire, which will serve part of the major rail project's eastern leg, will not benefit from a HS2 station. The section, which would have run from Birmingham through Leicestershire and Nottingham, has since been scrapped and now scaled back, running only as far as East Midlands Parkway. The cost implications of that move by the then Transport Secretary Grant Shapps are not known with his successor Anne-Marie Trevelyan yet to comment on the project.

For Mr Bridgen, he believed HS2 was a clear avenue to find extra funds from. "I've spoken with the Chancellor since his announcement and there are measures he could have taken. I think he could have cut some Government spending.

I think he will do it in the coming weeks," he told Ms Kearney. "For instance if the white elephant that was HS2 were cut that would show more fiscal control and control of spending. It's going to happen and the Government should get on and announce it."

A Department for Transport spokeswoman confirmed that there are no plans to cancel HS2, with construction on the project already underway.

She added that MPs are entitled to their view.