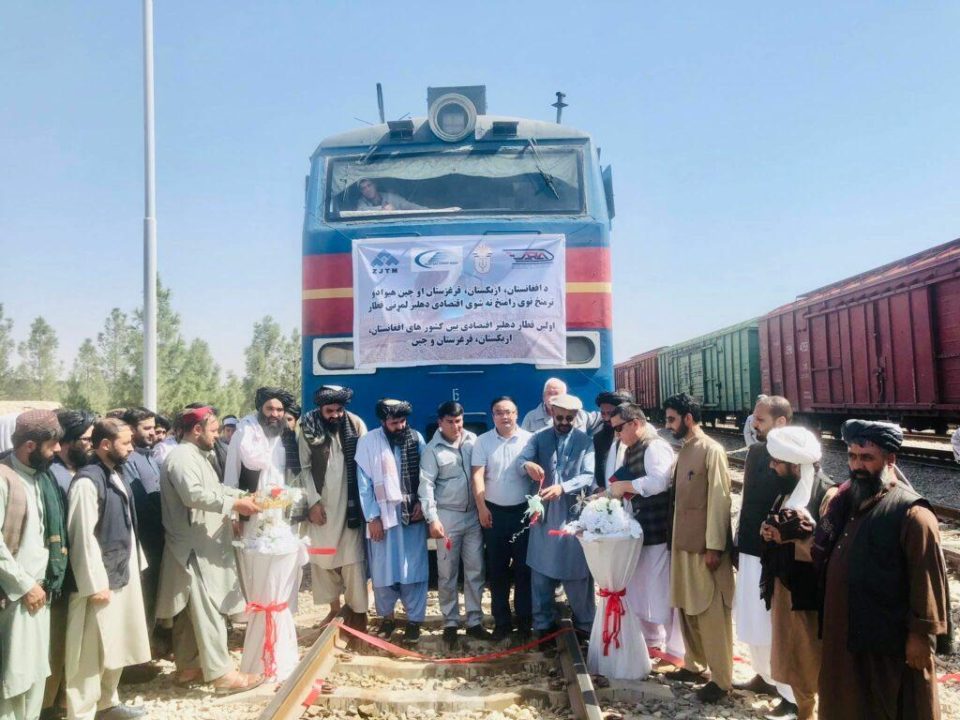 Photo: Twitter. Wang Yu/ @ChinaEmbKabul The first shipment along the China-Kyrgystan-Uzbekistan-Afghanistan corridor was successful. The first train carrying just two containers in the context of a testing period reached Hairatan in Afghanistan on Friday, 23 September.

It departed from the Chinese city of Kashgar on 13 September, making the service’s total transit time ten days. Wang Yu, the Chinese Ambassador to Afghanistan, shared the news of the train’s arrival on Twitter. He stressed the importance of the new economic corridor between China and Afghanistan, while he commented that the competitive transit time substantially shortens the distance between the two countries.

What is this new corridor?

The new service is not an all-rail service.

The first leg is carried by truck. From Kashgar, containers are trucked across the border to the Kyrgyz city of Osh. It is here that they are loaded on a train, which continues its way across the Central Asian countries to reach its final destination, Hairatan in Afghanistan.

A reason for the road leg could be that the border between China and Kyrgyzstan is situated in the Tian Shan mountain range, which impacts the efficiency of a train journey. With this multimodal solution, the journey should take a total of two weeks. Currently, cargo between China and Afghanistan is mostly shipped via the seaport of Karachi, and overland through Pakistan.

This is a journey that could easily take two months due to delays and transit hurdles. The Afghan Railway Authority has stated that import and export tariffs would be reduced significantly on goods being transported by rail, making the corridor more attractive.

Not the same as CKU

The Kashgar-Hairatan corridor is not to be mistaken with the much-anticipated China-Kyrgyzstan-Uzbekistan (CKU) railway line, which ends in the city of Andijan in Uzbekistan and does not include Afghanistan. Moreover, the CKU railway line is expected to pass through the agricultural region of Naryn, an area with a lot of potential to develop as a trade hub.

The CKU railway line also recently found its way (back) to the design table and is a project that receives a lot of attention, in particular from China.

It is considered to be the new southern branch of the Belt and Road initiative, and Uzbekistan is set to become the starting point for rail freight traffic to Turkey, and eventually to Europe, especially to Southeast Europe.