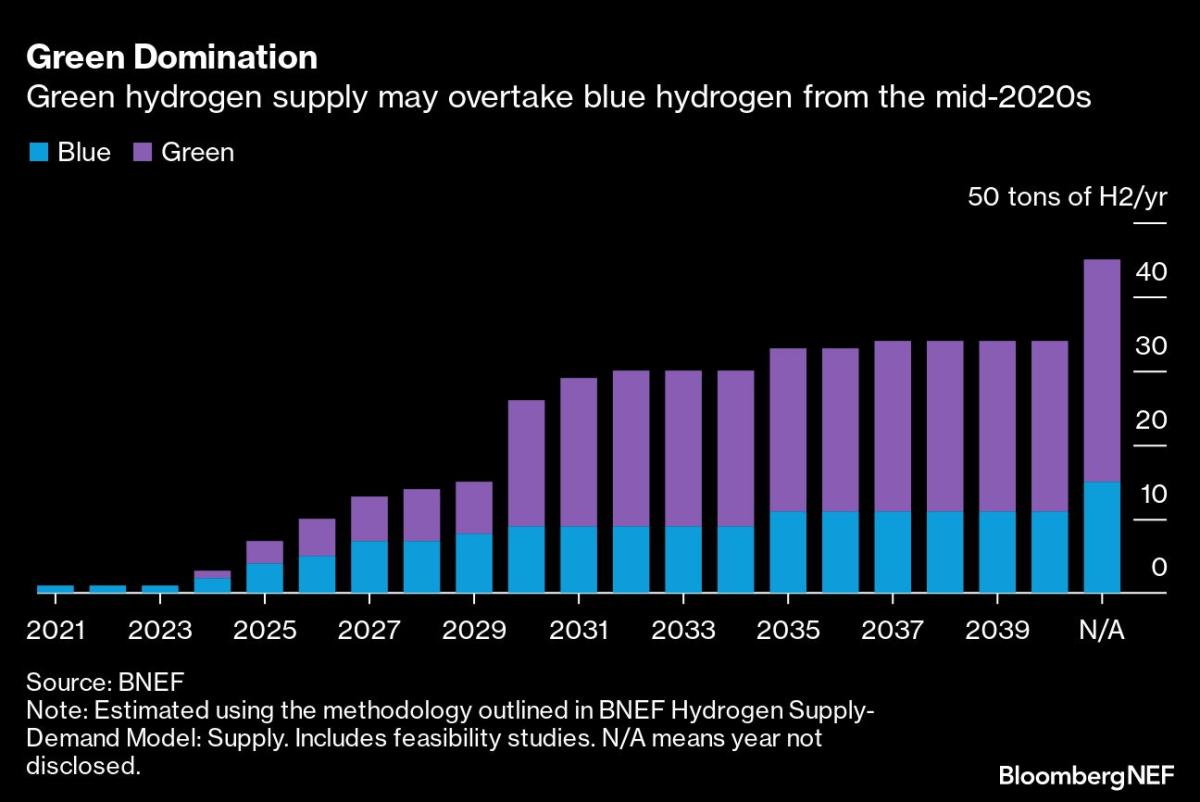 (Bloomberg) — On September 10, a ship docked at the German port of Hamburg carrying a little-known fuel that’s being billed as a potential clean answer to Europe’s energy woes: blue ammonia. Made from hydrogen, it can also be burned without producing any emissions of planet-warming carbon dioxide and has the advantage of being easier to transport. Europe’s first test cargo is destined for the continent’s largest copper producer, Aurubis AG, under a deal struck with the United Arab Emirates just three weeks after Russia’s invasion of Ukraine upended global energy markets.

The second shipment will depart within weeks, Mariam Almheiri, the UAE’s Minister of Climate Change and Environment, said last week. Most Read from Bloomberg If all works as planned, blue ammonia could offer a solution to European nations looking to wean themselves off Russian gas without undermining commitments to combat climate change.

It could also herald a new era for Gulf Arab nations, which are vying to dominate the nascent but fast-growing market for “future fuels” as the world shifts away from unrestricted burning of oil and gas.So far, blue ammonia has only been shipped in small quantities to countries including Germany, South Korea and Japan, almost all of it from the oil- and gas-rich Middle East. But when German Chancellor Olaf Scholz visited the region this weekend to secure more gas supplies, he also discussed future supplies of hydrogen and ammonia — as part of Germany’s broader transition toward cleaner energy.The trouble is, the blue ammonia that’s been shipped to Europe so far isn’t nearly as clean as it seems, according to multiple insiders who spoke to Bloomberg Green on condition of anonymity. The C02 captured in its production has been used by some of the world’s biggest oil producers to extract fossil fuels that are difficult to reach.

In theory, both hydrogen and ammonia can be considered clean fuels because they burn without releasing carbon dioxide. But much depends on how they’re made in the first place. If these future fuels are derived from water in a process powered by renewable energy, no carbon emissions are generated and the resulting product can be labelled “green.”

Until now, however, ammonia has largely been made using natural gas, an energy-intensive process that releases CO2 and further heats the planet. When that carbon is captured and permanently prevented from entering the atmosphere, the resulting ammonia is considered “blue” — not the cleanest fuel, but cleaner than burning fossil fuels. For the German shipments, Abu Dhabi National Oil Co. is capturing about 70% of the associated carbon emissions, according to a person familiar with the plan.

So far, so good. The captured greenhouse gas will then be transported about 200 kilometers (124 miles) by truck — burning fossil fuels on the way — to a facility where it will be injected into wells in Abu Dhabi to extract more oil, according to the person. That process, known as enhanced oil recovery, isn’t new or unusual in the industry.

But it also isn’t considered climate-friendly. The additional oil yielded from this process will end up emitting more CO2 when burned. So while using ammonia from the UAE will allow Aurubis and other end users to reduce their own emissions when compared to the natural gas they normally burn, in the atmosphere, where CO2 lingers for up to a century and heats the planet, it’s not clear what, if any, net gains will have been made.

The world’s very first blue ammonia cargo was produced in a similar way, leaving the industrial city of Jubail on Saudi Arabia’s east coast in 2020. Some of the CO2 was used to make methanol, which when burned also sends greenhouse gas into the atmosphere. The rest was trucked to the country’s Uthmaniyah field for enhanced oil recovery.

In trying to beat the competition to ship the first ever batch of blue ammonia, Saudi Aramco and its chemicals arm, Saudi Basic Industries Corp., also took some other shortcuts. Sabic and Aramco spokespeople last year confirmed that they didn’t capture CO2 directly from the ammonia plant. Instead, they subtracted emissions captured in a separate chemical-making process to “offset” the pollution created by the ammonia production.

That means no extra greenhouse gases were prevented from entering the atmosphere. “This is very creative accounting,” said Gniewomir Flis, an independent clean technology analyst. “Ideally, you’d have carbon captured at source, because once you start accounting for carbon captured in a different process you’re getting into the world of carbon offsets and that is a whole new game.”Adnoc declined to comment. Aramco and Sabic previously confirmed the process used to produce their initial ammonia shipment but did not respond to further questions for this story.

Germany’s Ministry of Economic Affairs and Climate Action, which negotiated the Adnoc deal, didn’t respond to requests for comment. While the market is in its infancy, researchers at BloombergNEF predict that, if clean hydrogen plays a major role in limiting global warming and it gets enough support, global sales could be worth up to an annual £700 billion by 2050. The initial German cargoes suggest Middle East gas producers could find ready buyers in Europe, where governments are scrambling to secure energy as Russia cuts off supplies and may be more willing to overlook fuels that are branded as environmentally-friendly, even when they don’t stand up to scrutiny.

The blue ammonia deal with Adnoc was finalized in March, when Germany’s Vice Chancellor Robert Habeck visited Abu Dhabi on the hunt for new energy sources in the frantic aftermath of Russia’s invasion. Germany’s said it sees the pilot shipments as the foundation for a medium-term transit route and wants the deliveries to cover demand that the federal government forecasts will reach as much as 110 terrawatt hours — equivalent to about a quarter of Germany’s current annual electricity consumption — by 2030.Germany is already reopening shuttered coal plants and abandoning pollution rules for rubbish incinerators to avoid a spike in winter electricity prices; by comparison, the Middle East’s ammonia looks relatively clean.Saudi Arabia and the UAE didn’t break any rules when they made their blue ammonia — the world is still debating what the standards for these new fuel sources should be. Once those guidelines are set and the Russian energy shock has worn off, the global prospects for blue ammonia begin to look less certain.

The European Commission has proposed that for hydrogen and related products like ammonia to be considered low-carbon, at least 70% of emissions from making and transporting the substance must be captured and permanently stored. Under proposed EU rules, buyers of ammonia made like these early cargoes would have to pay for the carbon emitted during production, making the end product far more expensive. Read More: Europe’s Green Hydrogen Rules Raises Costs for IndustryTo address those evolving standards, Saudi Aramco and Sabic have already started capturing carbon directly from the ammonia-making process and hired a German company as an independent assessor for the blue hydrogen and ammonia that they produced in 2021.

Even with those improvements, however, only a fraction of the output could be classified as “carbon neutral” because around 60% of the emissions were contained in the hydrogen-making process. That’s on top of carbon dioxide emissions from the production and transportation of natural gas needed to start the process.Aramco’s Sasref refinery produced around 50,000 tons of hydrogen last year but only 8,075 tons were classified as blue, Olivier Thorel, Aramco’s vice president of chemicals, said in an interview. Aramco and Sabic also made blue ammonia destined for export, but only a fraction of the output was classified as “blue” for the same reason.

The company will be able to produce more blue ammonia once it’s able to permanently bury the C02, Thorel said. It plans to use near-depleted oil and gas fields to store its emissions underground. Aramco’s first facility will be able to sequester as much as 9 million tons of carbon dioxide per year and begin operating in 2026, according to Thorel.

Qatar’s £1 billion blue ammonia plant is scheduled to start up around the same time. The UAE also hopes to use its old fields for carbon storage, and Adnoc is planning more blue ammonia plants that would capture 90% or more of the emissions they produce, a person familiar with the plan said.Adnoc and its partners are also in discussions with the governments and regulators of importing nations in Asia to determine what percentage of the emissions from a separate 1 million-ton-per-year plant that will come online in 2025 need to be captured, whether carbon must be captured at source and if it can be used to extract more oil, a person familiar with the talks said in May. That facility, located in the same Abu Dhabi complex, will produce ammonia from existing industrial activities, including steel-making, to avoid extra emissions.”Japan and Korea are currently behind Europe in terms of defining these kinds of regulations and what is eligible for government support or regulatory obligations,” said Aramco’s Thorel, who sees additional regulations on the horizon in these markets. “Our ambition when we design future facilities will be to meet the most stringent requirement.”One reason that the world has even considered blue ammonia and hydrogen is because making green versions has so far been prohibitively expensive.

The cost of producing green hydrogen is currently £2.82 per kilogram at its cheapest and will still be around £1 by 2030, according to BloombergNEF analysis. By contrast, Japan reportedly paid less than 60 cents per kilogram for the world’s first blue ammonia cargo from Saudi Arabia. If standards are tightened, the price of blue ammonia will rise significantly.

Carbon capture and storage has suffered many false starts over several decades — largely because of the enormous costs of building sequestration infrastructure, which sometimes run higher than £100 a ton, according to a 2021 report by management consultancy firm Kearney.That’s even more than the price paid for credits under Europe’s emissions trading scheme. In contrast, support from US and European governments is set to drive down the price of green fuels in the coming years, with the cost of renewable energy, large-scale electrolyzers needed to produce hydrogen and other related technology expected to fall. Even before the US introduced major incentives under a historic climate bill passed in August, researchers at BloombergNEF were predicting green fuels would become cheaper than their blue alternatives after 2030.

Representatives of Aurubis, GETEC and Steag, three of the four German companies that will receive blue ammonia from Adnoc’s test cargoes, said they view it as a stop gap until green fuels are commercially available. The long-term goal “is to produce green hydrogen,” a spokesman for energy firm Steag said. “On the way there, however, it is right and important to start with the emission-reduced options that are already available today.” For now, Steag said, the emissions from Adnoc’s project are in line with other low-carbon ammonia and among the lowest in the world. Middle Eastern sellers are hedging their bets.

Saudi Arabia has already started work on a large green hydrogen facility in Neom, its Red Sea city-in-the-making. The UAE is also planning to build a commercial facility after installing a pilot in Dubai last year. Yet even the market for green ammonia and hydrogen is far from secure.Read More: Miracle Fuel Hydrogen Can Actually Make Climate Change Worse

While hydrogen is not a greenhouse gas, if it leaks into the atmosphere it can extend the life of methane, which is a potent planet-warming gas. Every ton of hydrogen leaked can have the indirect warming impact of 33 tons of carbon dioxide. Ensuring leaks are minimized would add to the cost of these clean fuels.

Despite the uncertainties over future gas prices and how fast green alternatives will fall in price, claiming a slice of the blue ammonia market will be tempting for countries sitting on vast reserves of gas, said Anne-Sophie Corbeau, a global research scholar at Columbia University’s Center on Global Energy Policy. “There’s a lot of potential competition between would-be exporters of blue ammonia,” she said, “so it’s a good thing to be among the first.”

Most Read from Bloomberg Businessweek