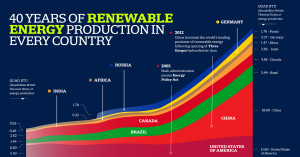 Every Electric Semi Truck in One Graphic

This was originally posted on Elements. Sign up to the free mailing list to get beautiful visualizations on natural resource megatrends in your email every week. Electric semi trucks are coming, and they could help to decarbonize the shipping and logistics industry.

However, range remains a major limitation. This presents challenges for long-hauling, where the average diesel-powered semi can travel up to 2,000 miles before refueling. Compare this to the longest range electric model, the Tesla Semi, which promises up to 500 miles.

A key word here is "promises"--the Semi is still in development, and nothing has been proven yet. In this infographic, we've listed all of the upcoming electric semi trucks, complete with range and charge time estimates. Further in the article, we'll explore the potential commercial use cases of this first generation of trucks.

The following table includes all of the models included in the above infographic.

Source: US News, CNBC, InsideEVs With the exception of Tesla's Semi, all of these trucks are currently in operation or expected to begin delivering this year. You may want to take this with a grain of salt, as the electric vehicle industry has become notorious for delays.

In terms of range, Tesla and Nikola are promising the highest figures (300+ miles), while the rest of the competition is targeting between 150 to 275 miles. It's reasonable to assume that the Tesla and Nikola semis will be the most expensive. Charge times are difficult to compare because of the variables involved.

This includes the amount of charge and the type of charger used. Nikola, for example, claims it will take 2 hours to charge its Tre BEV from 10% to 80% when using a 240kW charger. Charger technology is also improving quickly. Tesla is believed to be rolling out a 1 MW (1,000 kW) charger that could add 400 miles of range in just 30 minutes.

Use Cases of Electric Semi Trucks

Given their relatively lower ranges, electric semis are unlikely to be used for long hauls.

Instead, they're expected to be deployed on regional and urban routes, where the total distance traveled between destinations is much lower. There are many reasons why electric semis are suited for these routes, as listed below:

An example of a regional route would be delivering containers from the Port of Los Angeles to the Los Angeles Transportation Center Intermodal Facility (LATC). The LATC is where containers are loaded onto trains, and is located roughly 28 miles away.

With a round trip totaling nearly 60 miles, an electric semi with a range of 200 miles could feasibly complete this route three times before needing a charge. The truck could be charged overnight, as well as during off hours in the middle of the day.

We've covered the differences between battery and hydrogen fuel cell vehicles in the past, but this was from a passenger car perspective. The conclusion, in that case, was that battery electric has become the dominant technology.

In terms of long-haul trucking, however, hydrogen may have an edge.

If we look at what will become mainstream, probably for smaller mobility it will be EVs, and fuel cells for larger mobility. That is the conclusion so far.
-Toshihiro Mibe, CEO, Honda

There are several reasons for why hydrogen could be beneficial for delivering heavy cargo over long distances. These are listed below:

Note, however, that charge times are still improving.

Keep in mind that these numbers are once again estimates and that Nikola has been accused of fraud in the past.

Although there are very few models available, electric semi trucks are indeed being used today. In January 2020, Anheuser-Busch announced that it had received its 100th 8TT. The 8TT is produced by China's BYD Motors and was one of the first electric semis to see real-world application.

The brewing company uses its 8TTs to deliver products to retail destinations across California (e.g. grocery stores). Another U.S. company using electric semis is Walmart. The retailer is trialing both the eCascadia from Freightliner and the Tre BEV from Nikola.

The trucks are being used to pick up cargo from suppliers and then deliver it to regional consolidation centers.