Bangladeshis among dozens found inside trucks in Romania 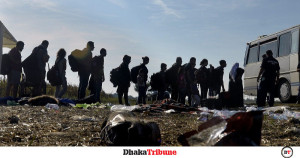 A number of Bangladeshis are among more than 70 migrants found in goods-laden trucks near a Romanian border with Hungary as they were allegedly trying to leave Romania illegally on Friday, the state-run Agerpres news agency.  The Bangladeshis are from the 19-42 age group, with the other migrants hailing from Ethiopia, Syria, Sri Lanka and Turkey. Checks at the Nadlac II Border Crossing Point led the migrants to be discovered from three trucks, said the western Arad Border Police.

Thirty-seven clandestine travellers were found in a truck driven by a Romanian, which was transporting refrigerators to Italy. "After carrying out a detailed control of the truck, the service dog signalled the presence of some people inside the transport, and upon opening the semi-trailer, 37 Sri Lankan citizens were found hiding there," the border police said. They intended to illegally cross the state border with the aim of reaching Western European countries, they added.

Also with the help of trained dogs, 20 migrants from Syria and Turkey were discovered hiding in a truck transporting refrigerators to Poland driven by a Turk. In the third truck, driven by a Romanian who was transporting auto parts to Italy, the border police discovered, hidden among the goods, 15 migrants from Bangladesh and Ethiopia, aged between 19 and 42. Bangladeshi migrants, trying to leave Romania illegally, are often apprehended by the country's security forces.

In a 24-hour span till September 15, Romanian authorities nabbed 131 migrants, most of them Bangladeshis, from trucks headed towards Hungary, says the London-based Border Security Report magazine.  As of mid-August, there were as many as 1,674 Bangladeshi citizens registered with a legal right of residence in Romania.  Of them, some 1,506 are for the purpose of employment," Romania's Interior Ministry informed InfoMigrants on August 16, 2022.

Bangladeshi workers get a special kind of work visa that does not allow them to travel to other EU member states from Romania legally.