'The Fallen Seven did not receive justice': Governor and families express 'shock' and 'outrage' after impaired Ukrainian truck driver, 26, is acquitted in deaths of seven Jarhead Motorcycle Club bikers in New Hampshire crash

By Janon Fisher For Dailymail.Com and Associated Press

The drugged-out truck driver who crossed the center line of a northern New Hampshire road, killing seven people on motorcycles, was found not guilty by a jury - a verdict that sparked 'shock' 'outrage' and 'anger' by the state's governor.

Volodymyr Zhukovskyy, 26, a Ukrainian national who now faces deportation, was acquitted on Tuesday by a jury of seven counts of negligent homicide and reckless conduct after less than three hours of deliberation following a two-week trial.

The grateful and relieved truck driver wiped away tears, kissed his finger and pointed to the sky after he was cleared.

He's been in jail since the June 21, 2019, crash in Randolph, New Hampshire, that killed seven members of the Jarheads Motorcycle Club, including six who were former Marine Corps soldiers.

The verdict prompted outrage by the survivors of the crash, the families of the dead bikers and New Hampshire Governor Chris Sununu.

'The Fallen Seven did not receive justice today, and that is an absolute tragedy,' the Republican governor tweeted. 'I share the shock, outrage, and anger that so many have expressed in the three years since the seven members of the Jarheads Motorcycle Club were taken from us.'

The father of the Albert 'Woody' Mazza Jr, 49, who was first in the convoy of bikers on the day of the crash, said he was in disbelief over the jury's decision.

Volodymyr Zhukovskyy, 26, kissed his finger and pointed at the sky after he was acquitted on seven counts of negligent homicide 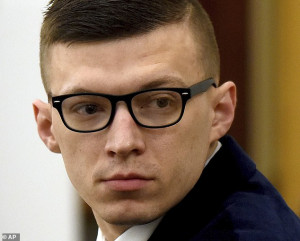 'Killing seven people and he gets off. That is unbelievable,' the father, who is also named Albert Mazza, said.

He said his son was a 'good man' who devoted much of his time to charity.

Prosecutors argued that Zhukovskyy - who had taken heroin, fentanyl and cocaine earlier on the day of the crash - repeatedly swerved back and forth before the collision and told police he caused it.

Federal crash investigators found that the truck driver was impaired by drugs and had swerved into the oncoming motorcycle convoy. 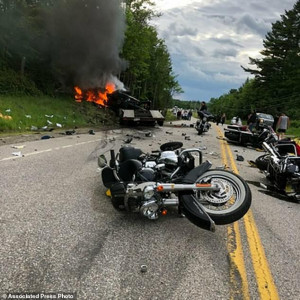 The tragic incident occurred on Route 2 near the town of Randolph, New Hampshire shortly before 6.30pm on June 21, 2019. The pickup truck burst into flames after striking the bikers

Bornstein dismissed eight charges related to whether he was impaired

The truck driver's lawyers blamed Mazza, saying he was drunk and not looking where he was going when he lost control of his motorcycle and slid in front of Zhukovskyy's vehicle.

'Our hearts go out to the victims and their families. Our trial team did an excellent job and we firmly believe that the State proved its case beyond a reasonable doubt,' New Hampshire Attorney General John Formella said in a statement.

Zhukovskyy's family, some of whom attended the trial, said in a statement they were grateful to God, the court and the defense attorneys for an 'honest and fair trial.' 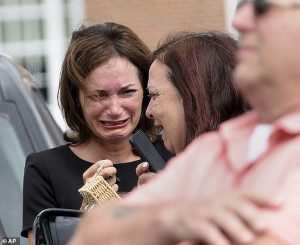 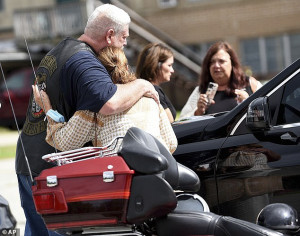 Jarheads Motorcycle Club family members console each other in the parking lot outside the Coos County Superior Court in Lancaster, NH after the verdict 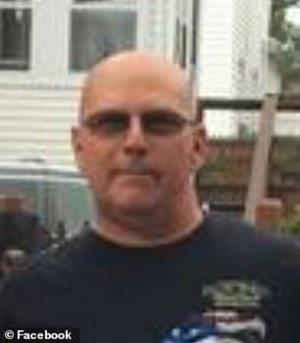 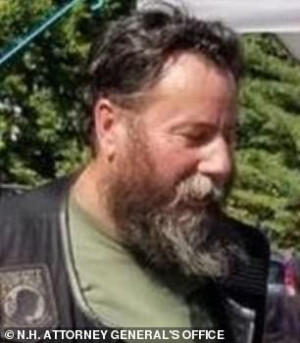 The victims - including Daniel Pereira, 58, of Riverside, Rhode Island (left), and Albert Mazza, 49, of Lee, New Hampshire (right) - were members or supporters of the Marine JarHeads 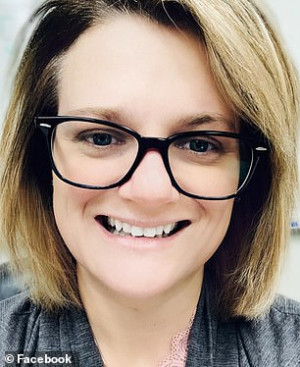 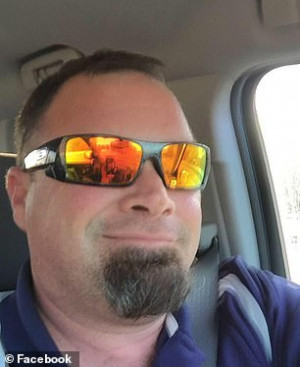 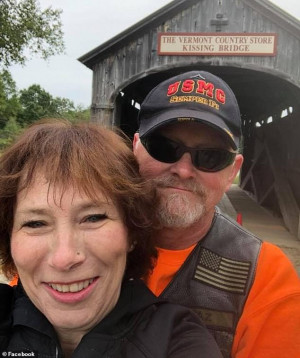 Authorities identified the seven bikers who died in the Friday night crash with a pickup truck. Among the victims were Joanne and Edward Corr, both 58, (pictured) of Lakeville, Massachusetts 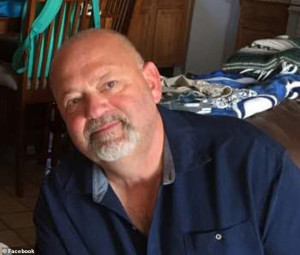 The Marine JarHeads is a New England motorcycle club that includes Marines and their spouses. Michael Ferazzi, 62, of Contoocook, New Hampshire, was among the crash victims

'Our family expresses its deepest condolences to the family and friends affected by this tragedy,' the family said, describing him as a 'very honest and kind man. He would never have done anything to hurt anyone.'

U.S. Immigration and Customs Enforcement issued an immigration detainer on him after the crash and that was executed following the verdict, said Ben Champagne, the superintendent at the Coos County Department of Corrections. 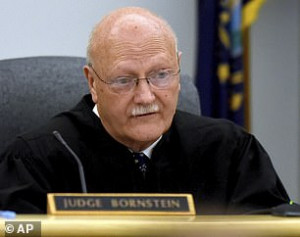 ICE said in a statement that Zhukovskyy has been served a notice to appear before an immigration judge and will remain in ICE custody pending the outcome of that appearance. It did not say where he is being held.

After the verdict, a member of the the motorcycle club reached through Facebook declined to comment. 'Jarhead' is a nickname for a Marine Corps soldier

The motorcyclists who died were from New Hampshire, Massachusetts and Rhode Island and ranged in age from 42 to 62.

They were part of a larger group that had just left a motel along U.S.

In closing statements Tuesday morning, the two sides raised questions about who was more 'all over the place': the trucker accused of swerving back and forth across the road or the eyewitnesses accused of contradicting each other. 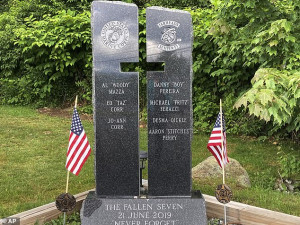 Twin stone pillars carry the names of the Fallen Seven, the members of the Jarheads Motorcycle Club killed in the June 21, 2019 crash

'Those witnesses were all over the place about what they recalled and what they claimed to have seen,' said defense attorney Jay Duguay.

Duguay also accused prosecutors of ignoring that their own accident reconstruction unit contradicted their theory that Zhukovskyy crossed into the oncoming lane.

An expert hired by the defense, meanwhile, testified that the crash happened on the center line of the road and would have occurred even if the truck was in the middle of its lane because Mazza's motorcycle was heading in that direction.

'From the beginning of this investigation, the state had made up their mind about what had happened, evidence be damned,' said Duguay, who also highlighted inconsistencies between witness accounts or when witnesses contradicted themselves.

In particular, Duguay suggested that the bikers 'shaded' their accounts to protect Mazza and the club. Prosecutor Scott Chase acknowledged some inconsistencies, but asked jurors to remember the circumstances. 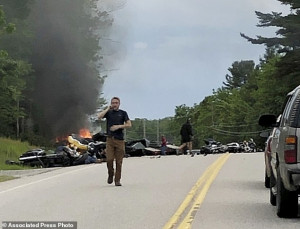 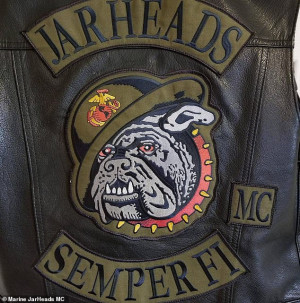 The Marine JarHeads biker club logo. The bikers who died were members of the South Shore chapter of the Jarheads, which has fewer than 30 members

'People were covering the dead, trying to save the barely living, comforting the dying. This wasn't story time,' he said. 'They were up here talking about some of the most unimaginable chaos, trauma, death and carnage that we can even imagine three years later.

They were talking about hell broke open.'

Witnesses were consistent, he argued, in describing the truck as weaving back and forth before the crash. That behavior continued 'until he killed people,' Chase said.

'That's what stopped him. It's not that he made some responsible decision to start paying attention or do the right thing,' he said. 'The only thing that stopped him was an embankment after he tore through a group of motorcycles.'

Chase called the attempt to blame Mazza a 'fanciful story' and 'frivolous distraction,' while reminding jurors that Zhukovskyy, who didn't testify at trial, told investigators 'Obviously, I caused the crash.'

Volodymyr Zhukovskyy, 26, kissed his finger and pointed at the sky after he was acquitted on seven counts of negligent homicide

'He was crystal clear from the very beginning that he caused this crash,' Chase said. 'That is what he said, because that is what happened.'

An National Transportation Safety Bureau investigation found that Zhukovskyy was impaired by drugs and that his 2016 Dodge 2500 pickup truck and trailer crossed the double yellow lines in the center of the road into the oncoming bikers.

The investigation also found that he should never have been driving.

Records show that Zhukovskyy was also stopped on suspicion of driving drunk just in May 2019, in a Walmart parking lot in East Windsor, Connecticut after failing a sobriety test.

He was also arrested on a drunken driving charge in 2013 in Westfield, Massachusetts, state records show.

He was placed on probation for one year and had his license suspended for 210 days, The Westfield News reported.

That prior record should have prevented Zhukovskyy from holding a commercial driver's license, however he did have a Massachusetts commercial license.

Connecticut officials alerted the Massachusetts RMV, but Zhukovskyy's license wasn't suspended due to a backlog of out-of-state notifications about driving offenses.

In a review, federal investigators found similar backlog problems in Rhode Island, New Hampshire and at least six other jurisdictions.

As a result of the investigation, the head of the RMV, Erin Deveny, resigned.