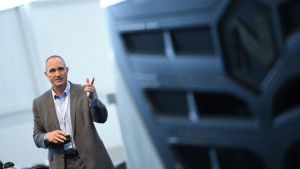 1 and be replaced by an executive who joined the embattled electric-truck maker earlier this year. Russell will remain on the board following his departure, the company said Wednesday in a statement. Michael Lohscheller, an industry veteran who was named president of Nikola Motor in February, will join the board immediately and take over as CEO when Russell vacates the role.

Shares of Phoenix-based Nikola climbed 2.3% as of 9:32 a.m. in New York. The stock fell 29% this year through Tuesday's close. The leadership shakeup comes as Nikola tries to restore credibility in management and overcome supply-chain hurdles to boost production of its debut battery-electric semis.

Trevor Milton, the company's founder, was indicted last year and accused of lying to investors, dragging down Nikola's stock. Russell has held the top post since June 2020, when Nikola was a poster-child of the many EV-related companies going public via reverse merger with blank-check firms. Within months -- and after the departure of the company's founder -- Russell scaled back and simplified Nikola's ambitions, while trying to repair its reputation in the wake of the allegations against Milton.

"We want to thank Mark for navigating Nikola through a critical chapter and playing a key role in positioning us for our next phase of growth," Nikola Chairman Steve Girsky said in Wednesday's statement. The company gave no reason for the timing or motivations around Russell's departure. Lohscheller has more than 20 years of experience in the automotive industry, including as chief financial officer of Mitsubishi Motors Europe and the same role at Volkswagen's American operations.

Lohscheller was brought in by Girsky along with many other GM veterans to help Nikola make the transition from startup to a mass producer of trucks.

Nikola's board saw Russell as a steady hand to stabilize the company following the Milton episode, but wanted to bring in leadership with more industry experience to manage the business.