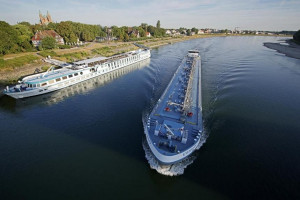 BUCHAREST/FRANKFURT/LONDON (BLOOMBERG) - In the midst of an arid summer that set heat records across Europe, the continent's rivers are evaporating. The Rhine - a pillar of the German, Dutch and Swiss economies for centuries - is set to become virtually impassable at a key waypoint later this week, stymieing vast flows of diesel and coal. The Danube, which snakes its way about 2,900km through central Europe to the Black Sea, is gummed up too, hampering grain and other trade.

Across Europe, transport is just one of the elements of river-based commerce that's been upended by climate change. France's power crisis has worsened because the Rhone and Garonne are too warm to effectively cool nuclear reactors, and Italy's Po is too low to water rice fields and sustain clams for "pasta alle vongole". While disruptions to waterways would be a challenge at the best of times, the region is already on the brink of recession as Russia's invasion fuels inflation by squeezing food and energy supplies.

The situation - just four years after a historic halt to Rhine shipping - adds urgency to European Union efforts to make inland shipping more resilient. The continent's rivers and canals convey more than 1 tonne of freight annually for each EU resident and contribute around US£80 billion (S£110 billion) to the region's economy just as a mode of transport, according to calculations based on Eurostat figures. But the fallout from dried-up waterways goes deeper.

"It's not just about commercial navigation. It's about freshening up when it's hot, it's about irrigating and so many other things," said Cecile Azevard, director at French water operator VNF. "Rivers are part of our heritage." The poor conditions are expected to drag down the region's economies far worse than the EUR5 billion (S£7 billion) hit caused by Rhine transit issues in 2018, according to Albert Jan Swart, a transportation economist at ABN Amro Bank NV.

"The capacity for inland shipping is going to be severely limited as long as there's not a lot of rain in the area," he said. "You also get the damage caused in Germany by the high electricity prices. We're talking billions." Even seasoned veterans are shocked.

Gunther Jaegers, managing director at Rhine stalwart Reederei Jaegers GmbH, said he fell off his chair earlier this month when he saw the cost of shipping, with one barge rate surging by 30 per cent in a single day. "I've never, ever, seen this," he said. "It is insane." While Jaegers and other shippers might be able to charge more per tonne of cargo, they're limited in how much they can carry as the lower water means they have to take on smaller loads to sail safely.

And there's no relief in sight. If you look at the weather forecasts, "it's like desert", he said. At the southern end of the Rhine Gorge - an area known for Riesling wines - terraced vineyards have turned brown, while in Cologne, a popular floating restaurant ran aground after waters retreated.

A sandbank has emerged some 20km upstream from Kaub, the site of a difficult passage near the famed Lorelei cliffs. The river's depth at the town west of Frankfurt is forecast to drop to 40cm on Friday (Aug 12). At that level, barges are effectively unable to sail.

The water is predicted to fall as low as 37cm the following day, the German Federal Waterways and Shipping Administration said on Wednesday. The Rhine, Europe's most important river, plays a key role in helping transport more coal to German power plants to help offset the impact of Russia's squeeze on gas supplies. But Chancellor Olaf Scholz's administration is concerned shipping snarls could undermine plans to revive some mothballed facilities, according to people familiar with the situation.

France - normally a power exporter - can't help ease the energy crunch because only about half the country's nuclear reactors are available, with the rest off for maintenance. Norway is also gearing up to limit electricity exports as the country prioritises refilling low reservoirs over power production. The impact of climate change is mostly felt by people through changing patterns of water supply, either too little or too much.

While Europe is suffering a historic drought, deadly floods this year have hit the US state of Kentucky, South Africa and Brazil. China has been hit by both. As the climate crisis intensifies, it will only get worse.

Europe's main river systems are fed in part by Alpine glaciers. In the spring and summer, the runoff augments rainfall, but the ice flows are shrinking. The Alpine region has seen 2 degrees Celsius of warming since the second half of the 19th century, about double the global average, according to the European Environment Agency.

That sets off a doom loop, with barren rock absorbing the sun's heat - rather than reflecting it as glaciers do - accelerating the process.

Scientists expect Alpine ice cover to halve by 2050, with almost all glaciers disappearing by the end of this century.