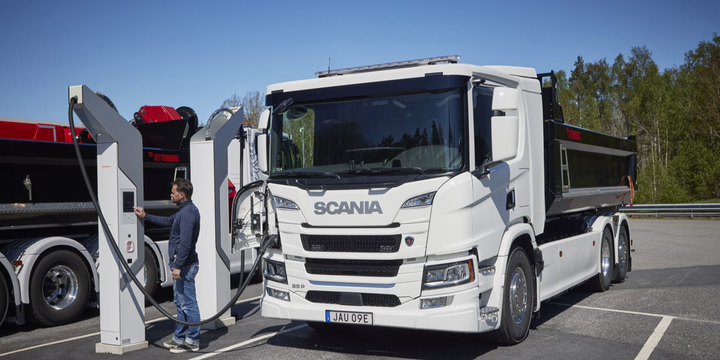 "When we talk to customers about electric trucks, they always ask: where can we charge?" said Traton CEO Christian Levin. Photo: Scania

The Volvo Group, Daimler Truck, and Traton Group have completed the final step of its previously announced joint venture for charging infrastructure in Europe. The JV plans to install and operate at least 1,700 high-performance green-energy charge points on, and close to, highways as well as at logistics hubs across Europe.

The parties are committing to invest EUR500 million in total, which is assumed to be the largest charging infrastructure investment in the European heavy-duty truck industry to date.  The charging network will be open and accessible to all heavy commercial vehicles in Europe, regardless of brand. In addition, with Daimler and Traton both headquartered in Germany, Traton welcomed the German government's plan to build a high-performance charging network for battery-electric long-haul trucks in Germany but urged officials to move faster.

"Tendering for the charging network for trucks will not begin until the end of 2023. This means that we are planning to deliver our vehicles way before the corresponding infrastructure is ready. And yet without this infrastructure, these trucks will not succeed," said Traton CEO Christian Levin.

Volvo Trucks said it will begin mass production and sales of heavy-duty fuel-cell electric trucks in the second half of this decade, following the recent start of prototype trials on the company's test track.

The hydrogen-powered trucks, weighing up to 65 tons or even higher, will have a range of up to 1,000 km (62and a refueling time of less than 15 minutes. The two on-board fuel cell systems will generate 300 kW of electricity to power the vehicle. These will be supplied by cellcentric GmbH & Co, a joint venture between the Volvo Group and Daimler Truck.

Customer pilots are slated to begin in a few years' time, with production for market to follow in the latter part of the decade. Volvo Trucks, however, has stated that the lack of a substantial fueling infrastructure for hydrogen trucks and the short supply of "green" or renewably-sourced hydrogen are major obstacles to the market adoption of fuel-cell electric vehicles.  "We expect the supply of green hydrogen to increase significantly during the next couple of years, since many industries will depend on it to reduce CO2," said Roger Alm, president of Volvo Trucks. "However, we cannot wait to decarbonize transport; we are already running late.

So, my clear message to all transport companies is to start the journey today with battery electric, biogas and the other options available. The fuel cell trucks will then be an important complement for longer and heavier transports in a few years from now."

News Briefs from Around the World

Hydrogen fuel cells in China: FAW Jiefang Group delivered a major order for 300 hydrogen fuel-cell trucks for operation in three mega cities in China. FAW says it is one of the largest orders of hydrogen powered trucks in the country to date and includes rigid cargo trucks, tippers and tractor units for a variety of applications including logistics, construction and short-distance transportation.

China is stepping up its efforts to clean up its vehicle fleet, having set a target of reaching peak carbon emissions before 2030 and achieving carbon neutrality by 2060. Hydrogen in the UK: Tevva announced what it said is the first hydrogen fuel cell-supported heavy goods vehicle to be manufactured, designed and mass produced in the UK. By adding a hydrogen fuel cell system to its battery-electric truck design, Tevva's hydrogen- electric truck will have a range of up to 310 miles and its hydrogen tanks can be refilled in 10 minutes. India anniversary: Daimler India Commercial Vehicles, a wholly owned subsidiary of Daimler Truck AG, celebrates 10 years of business operations in India.

This news first appeared in the August 2022 issue of Heavy Duty Trucking.

For a free trial subscription to T&BB.