Blue Borders, Dark Bodies: The Mediterranean as a Site of Racist Murder 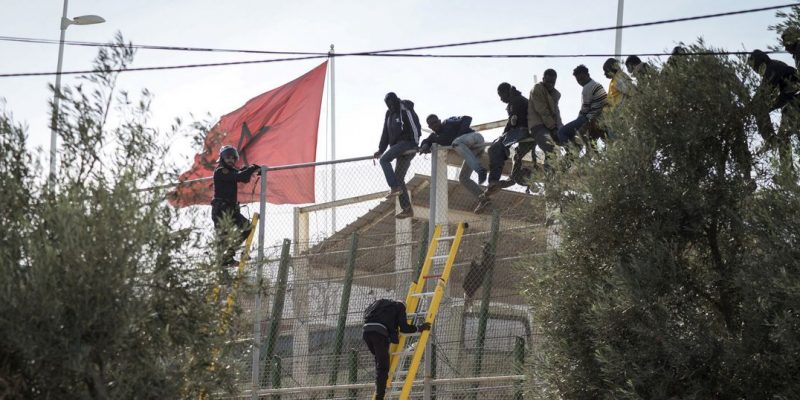 On the northern shores of Morocco, in North Africa, lies Melilla, one of two enclaves occupied by Spain. On June 24, 2022, a group of around 2,000 mostly Sub-Saharan African migrants attempted to cross the border that separates the Moroccan territory from the Spanish occupied territory. As a result of "unjustified" use of force by the Moroccan security forces, 23 migrants "died."

A successful crossing of the land border by these migrants would have signified their crossing over into Europe, even if the enclave lies in Africa. This so-called illegal land border crossing attempt is similar to the so-called illegal crossing of the Mediterranean that migrants south of the sea undertake to head up north to Europe. Like in articles published by many journalistic outlets as well as reports by international organisations, the Human Rights Watch report on the event opens with the "deaths of at least 23 African men" (emphasis mine).

Here, two words point to how these reporting institutions interpret these events; a racist murder is termed "death" and the presence of men from Africa in Africa is presented as if an anomaly in the context of the Melilla incident. The borders are a human construction and are maintained by those in power by political, economic and military force; to say that 23 men "died" is to refrain from naming the borders - and the keepers of these borders - as murderers.  The Mediterranean as a racist border

It is summer now and the North African beaches are full of European tourists enjoying the pleasures of the blue sea. It is their white bodies that recurrently show up in photographs and documentaries about the Mediterranean. It is them, we are told through these pictures, that belong to the Mediterranean.

European Union passport holders get to come to the beaches of Morocco and Tunisia at their own will, visa-free. Borders barely exist for these white bodies; rather, borders are lived as a hot summer inconvenience of queues at the airport border security.  Also read: Shame Is Keeping Us Here, Say African Migrants in Italy

Let us take the case of Tunisia. Imagine you are arriving from the Ivory Coast to Tunisia; Ivorians have a right to 90-day visa free entry in Tunisia. Yet, many of my Ivorian interlocutors (during my research-related interviews) have mentioned cases of their compatriots being denied entry at the Tunis airport, detained at the border in humiliating conditions for days and without any clear reason for detention, and then asked to pay for flights back to their country.

But you, with your dark black body, are the one arbitrarily stopped and searched by the police. One Sub-Saharan interlocutor mentioned to me how a false charge of carrying drugs was fabricated against them when they were stopped; they were asked to sign a document in Arabic that they couldn't understand, and a translation into French was refused. Maybe, with your black body, you will go to prison or get deported!

Also read: Tunisia: On Moments of Political Uncertainty and Attempts to Negotiate the Meaning of Democracy Now, imagine that as a Sub-Saharan African 'migrant' you manage to escape going to prison or getting deported. With every passing week, you accumulate a penalty of Tunisian Dinar 20 (around £6.5); or around £325 per year.

But you barely have any money in Tunisia; many of my Sub-Saharan interlocutors have mentioned not being paid by their employers for months because these employers exploit the legally precarious situation of these migrants.  Facing death as the only option Now, after two years, you really want to leave to go back to your country.

Or maybe you have a family emergency; one Ivorian interlocutor's father died while he was stuck in Tunisia. But you have accumulated an over-stay penalty of £650 (or more). Plus, a one-way flight to anywhere in Sub-Saharan Africa from Tunis costs between £500-1,000.

You know that you will never have this money. You try to go to your country's embassy. For example, I, as an Indian researcher, have not been able to get a residence permit after two years in Tunisia.

Last month, I headed to the Embassy of India in Tunis and my demand for legal counselling and diplomatic intervention was rejected because, as I was told, "this is Tunisia's internal sovereign matter." My Sub-Saharan interlocutors have mentioned similar stories of aid-rejection at their respective embassies. At the same time, I have been told that, if I had been a French citizen, the Embassy of France would have intervened in my case.  I am not Black and I don't depend on the labour market in Tunisia to feed myself; these are the two privileges I have in Tunisia.

But Sub-Saharan women and men who depend on the labour market have spoken to me of persistent exploitation and racialised violence (both verbal and physical) at workplace. Many tell me that they feel stuck because they barely earn a hand-to-mouth existence while knowing that they will never be able to pay the accumulating penalty. They know that, at any moment, police may stop them and send them to prison.

It is too expensive to go back home, and too humiliating to stay in Tunisia. The only option? "Take the boat," as many of my Sub-Saharan interlocutors call it, meaning the so-called illegal voyage through the sea to Italian shores on tiny boats not meant to float through heavy waves. Abel (a 32-year-old from Ivory Coast, living in Tunis since 2019, who drives a truck delivering furniture; name changed) told me that it is cheaper for those in his situation to pay around £1,000 to Tunisian smugglers and face a "40% rate of success" in crossing the Mediterranean Sea to make their way to Europe, rather than paying the penalty plus flight costs to head back to their home country from Tunisia. "A 60% chance of dying?" I asked Abel, and he nodded.

Not death, but murder According to the UNHCR, in 2021, 123,300 migrants crossed the Mediterranean from North Africa to arrive in Europe. A total of 3,231 were reported "dead or missing at sea." Yet, these numbers remain contested.

For example, according to Caminando Fronteras, a Spanish NGO, an average of 12 migrants per day (or 4,404 over the year) died trying to reach Spain through the Mediterranean in 2021; according to them, the success rate of crossing is at around 80%. But this success rate is inflated because it doesn't include boats being towed away back to North African shores by national guards on each side.  Many scholars and activists have pointed out the role of the externalisation of European borders into North Africa in causing these deaths.

For example, France slashed visa quotas for Tunisia, Algeria, and Morocco last year, closing down legal paths to migration for many. For those who do "take the boat" and find themselves in distress at the sea, European Union border patrol ships turn a blind eye, essentially letting these migrants drown.   Yet, in conversations about borders, rarely do we talk about how Global South countries invest in and maintain violent border-regimes.

In the case of Tunisia, an im/migration non-policy is deliberately maintained by institutional actors at different levels (border police, internal affairs ministry, private legal agencies promising paper-work) because, among others, it is a lucrative site for corruption. In India, the state made 1.9 million citizens stateless by omitting their names from the National Register of Citizens (NRC) list in Assam in 2019; those omitted remain vulnerable to arbitrary arrests and detention. In addition, the arrival of Afghans to India after a political crisis last year also made visible the absence of a national refugee protection framework; India is not signatory to the 1951 Refugee Convention or its 1967 Protocol, and its treatment of those seeking protection remains ad hoc.

Also read: Refoulement, Rohingya and a Refugee Policy for India What we need, as Global South countries, is to go beyond the Global-North-as-border-creators framework and reflect on the violence that we continue to perpetuate through im/migration policies in our countries. We need to name those responsible for maintaining non-transparent policies and those who invest (instead) in border security and surveillance apparatus, murdering the most marginalised.

She currently resides in Tunisia.

This research has been funded the ZEIT-Strifung Ebelin und Gerd Bucerius, Hamburg, within the Ph.D scholarship program, 'Beyond Borders'.