How the US is hindering global climate financing 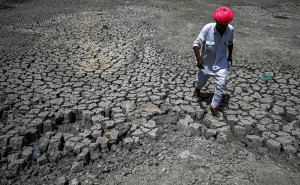 In May, India received £1.5bn in financing for electric vehicles from the Green Climate Fund (GCF), a mechanism created by the United Nations in 2010 to help developing countries transition and adapt to the climate crisis. According to the GCF, the funding will help India avoid 9.5 million tonnes of emissions. Instead of meeting the increased transportation demand with fossil fuels, India will use that funding to jump directly to renewables.

"It's not just about transition, it's about leapfrogging into renewable energy systems," Harjeet Singh, a senior advisor at the Climate Action Network International, told Al Jazeera.

Developing countries such as India are entering an era of rapid industrialisation at the precise moment when the world needs to stop burning fossil fuels.

The GCF, which aims to curb emissions and avert runaway climate change, receives contributions from developed nations that have admitted responsibility for the climate crisis because of their historic and ongoing emissions.

The country with the most cumulative emissions to date is the United States. In 2014, the US acknowledged its role by pledging £3bn to the GCF - but it has failed to follow through, contributing only a third of that so far, Singh said. [embedded content]

Now, President Joe Biden is asking Congress for £1.6bn for the GCF, which would nearly meet that original goal.

But experts say he faces a battle to get the funding approved, and in the meantime, the GCF is asking rich nations for additional pledges.

The GCF is the world's largest multilateral climate fund, and under the 2015 Paris Agreement, it took on a central role in delivering finance to developing countries for adapting and transitioning to renewables.

"We cannot afford for every country to follow these industrialisation pathways that the developed world has done," said Joe Thwaites, an international climate finance advocate at the US-based Natural Resources Defense Council.

The GCF is not the only mechanism for climate funding; in 2009, rich nations collectively pledged they would give £100bn annually in climate finance to developing countries by 2020 - but they have fallen short. [embedded content]

During the GCF's startup phase in 2014, developed nations collectively pledged £10bn to the fund. Under the administration of former President Barack Obama, the US gave £1bn, but his successor, President Donald Trump, refused to contribute.

Last year, Biden requested £1.2bn for the GCF, but failed to secure it amid Republican opposition.

Thwaites said the £1.6bn Biden is now requesting would be "incredibly welcome", but getting it through Congress would be "tricky".

"There is a significant portion of Congress that does not want to be associated with supporting any climate action," he said. "Part of it is that [Republican representatives] are worried about primary [election] challenges."

Democrats may be able to negotiate for GCF funding, but "it depends how much of a priority [they] make it", Thwaites added.

Due to its £3bn pledge, the US carries significant weight on the GCF board, which decides which countries get funding. Board seats are allocated based on the amount of financial contribution, giving the US one seat out of 24 board members and one alternate seat out of 24 alternate members, said Liane Schalatek, who is part of the GCF observer network, an assortment of civil society groups that advocate on behalf of Indigenous and other communities.

Schalatek says the US has opposed GCF financing for projects in Cuba and Gaza "for largely domestic political reasons". A project approved in 2019 reuses treated wastewater in Gaza for agriculture, in order to reduce pressure on an aquifer that is the region's only freshwater resource. "All other countries' board members supported it, but again, the [US] objection to the project was purely on that domestic political reasoning," Schalatek told Al Jazeera.

If the US doesn't meet its financial pledge, she said, "they probably should not continue to have that kind of double seat" on the GCF board.

Meanwhile, as it struggles to fund the GCF, the US is continuing its legacy of funding fossil fuel expansion. A Guardian investigation published in May found the US gives some of the world's biggest fossil fuel subsidies per capita.

It is also the leading source of potential new emissions, the report noted, with 22 "carbon bombs" that together have the potential to emit 140 billion tonnes of CO2 - nearly four times more than the entire world emits annually.

Low-income countries, on the other hand, will produce only around one percent of global emissions by 2035, according to the Center for Global Development. "The emissions are here, in rich countries, and that needs to get to zero; it's as simple as that," Ian Mitchell, a senior policy fellow at the centre, told Al Jazeera. "That's where the action really needs to be to fight climate change."

'We have very little time'

By underfunding the GCF, the US is slowing the world's climate transition, experts say. "[The GCF is] at a moment where they badly need that money to come in," Thwaites said. "There is still a huge list of projects waiting for approval."

Singh added: "If we continue to block actions, and if we do not allow institutions to really function, then we will not be able to solve the crisis. We have very little time. The [Intergovernmental Panel on Climate Change] has been warning us."

If current trends continue, the GCF says, temperatures could exceed the 1.5C threshold in the next two decades.

Singh pointed to the 2021 heat dome that killed more than 600 people in the Canadian province of British Columbia, along with a heatwave this year in northern India that decimated crops. "We all are in the same storm, but we have different kinds of boats to weather that storm," he said.

The British colonial legacy is what left India reliant on coal, Singh added: "We need to understand that rich countries - who have resources and have benefitted from industrialisation and colonialism - have a bigger responsibility and need to provide a helping hand.

"I don't know why some countries can't see the writing on the wall."