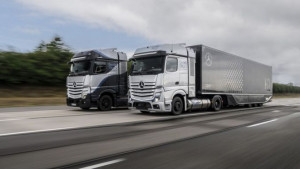 Daimler Truck, which has been testing the fuel cell prototype of the Mercedes-Benz GenH2 Truck intensively since last year, has launched a new prototype of the vehicle to test the use of liquid hydrogen.

The development target of the GenH2 Truck is set as a range of up to 1.000 kilometers and longer, making it suitable for variable and demanding applications, especially in important parts of long-haul heavy-duty transportation. Daimler Truck also plans to work with Shell, BP and TotalEnergies on the establishment of hydrogen refueling stations along important shipping routes in Europe. Daimler Truck, which has been extensively testing the fuel cell prototype of the Mercedes-Benz GenH2 Truck both in-house and on the road since last year, has launched a new prototype to test the use of liquid hydrogen.

Daimler Truck has set the development target of the GenH2 Truck, which is ready for mass production, as a range of up to 1.000 kilometers and longer. This makes the truck suitable for variable and demanding applications, especially in key parts of long-haul heavy-duty transport.

Having built a new prototype filling station that enables hydrogen refueling at its development and test center in Worth, Daimler Truck celebrated the first liquid hydrogen (LH2) refueling of a truck with Air Liquide. During the refueling phase, cryogenic liquid hydrogen at minus 253 degrees Celsius was filled into two 40-kilogram tanks located on either side of the vehicle chassis.

Especially thanks to the good insulation of the vehicle tanks, the temperature of the hydrogen can be maintained long enough without active cooling. Daimler Truck prefers liquid hydrogen because of its significant advantages in the development of hydrogen-based drives. Due to its significantly higher energy density in terms of volume compared to gaseous hydrogen, liquid hydrogen, which allows more hydrogen to be transported, significantly increases the range and provides vehicle performance at a level comparable to ordinary diesel trucks.

This innovative approach provides even greater storage density and easier refueling compared to the LH2. The company aims to make the first refueling of a prototype vehicle at a pilot station in Germany in 2023.

Shell will work with BP and TotalEnergies for hydrogen refueling stations

Daimler Truck plans to work with Shell, BP and TotalEnergies on the installation of hydrogen refueling stations along key European shipping routes. Daimler Truck, IVECO, Linde, OMV, Shell, TotalEnergies and the Volvo Group have committed to work together within the H2Accelerate (H2A) interest group to help create the conditions for hydrogen trucks to hit the road for the mass market for the first time in Europe.

Clearly determining its strategic route towards a carbon-neutral future, Daimler Truck follows a two-pronged strategy of equipping its product range with electric vehicles, with both battery-electric and hydrogen-based drives.

The company aims to offer carbon neutral vehicles in its core markets by 2039.