Another hour-long delay in Dover and the Channel Tunnel, ‘Dover Port is Too Small’

For the second day in a row, crowds of holidaymakers and truck drivers in southern England stopped for hours before crossing into the European mainland. There are long queues due to customs waiting times at the ferry terminal.

There are also long traffic jams to the Channel Tunnel in Folkestone. Passengers are stuck for up to seven hours. This is partly due to the partial closure of the M20 motorway to non-goods traffic.

Wait times are perhaps longer today than yesterday, when Britons also had to queue for hours.

On the first day of the school vacation, the delay was up to six hours. The forecast for today was that a total of ten thousand cars wanted to reach the mainland. Yesterday, 8,500 cars entered customs.

This is what the long lines looked like in Dover today: 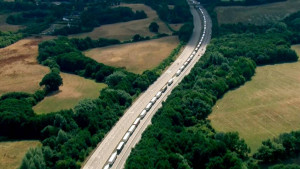 Long lines for ferry in Dover

The British blame France for the congestion: according to the Port Company, the French sent very few border personnel to England.

The French say the checks are taking longer because Britain is no longer a member of the European Union. Since Brexit, anyone traveling to mainland Europe from England will have to undergo more extensive passport control than before.

The French MP for the Calais region, Pierre-Henri Dumont, responds to Sky News about the long waiting times. In addition to Brexit, this relates to the size of the port in Dover: “The fact is that the port of Dover is very small, about three to four times smaller than Calais.” There are hardly any delays in Calais for travelers to England.

The only way to reduce waiting times is to invest heavily in facilities at the port, but the British are reluctant to do so, says Dumont: “It will be for years to come if the Port of Dover does not undergo a transformation.”

It is also busy today on the European mainland.

But traffic jams gradually eased in the afternoon. On the French A7, the famous Route du Soleil, traffic between Vienna and Orange is three hours late this morning. By 1.30pm, that had dropped to about two hours.

On the A10 from Paris via Bordeaux to Spain, the delay is more than three and a half hours in total.

It is also very crowded in a number of tunnels in Austria and Switzerland. Traffic is stuck in the Gotthard Tunnel, among other places, with a delay of about an hour and a half.

The ANWB warned that it will be congested on European roads throughout the holiday period. Next Saturday is expected to be the busiest day of summer, with southern Europeans also out en masse.