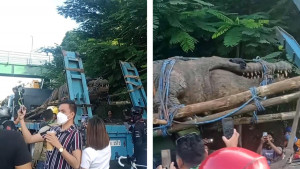 Two rivers in Austria's southern state of Carinthia burst their banks overnight into Wednesday, June 29, causing flooding and landslides which left at least two people missing and thousands without electricity, local media reported.Footage recorded by @emmaisnotmyname shows floodwater rushing down a street in Treffen am Ossiacher See in the early hours of Wednesday. Daylight photographs showed extensive damage to buildings there.Local media reported that the area around Lake Ossiach had been hit by heavy storms overnight into Wednesday. The Pollauer and Treffner rivers had burst their banks, causing landslides.Two people were reported missing from Treffen and nine were airlifted.

Local media said that people in nearby Arriach were trapped in their houses as roads leading to the village were washed out.According to local media, more than 7,000 people were without electricity on Wednesday morning Credit: @emmaisnotmyname via Storyful