Ebey's Landing National Historical Reserve officials are advocating for the reconstruction of a historic San de Fuca building that was severely damaged when a semi truck crashed into it and caught fire Sunday, but the owners are unsure if they'll rebuild the iconic structure. Reserve trust board members wrote in a statement that the building that houses Penn Cove Pottery, which is listed in the National Register of historic places, has historic value for its association with commercial enterprises which established a stable economic foundation for early European-American settlers in the area. "Reserve staff will advocate towards the rebuilding of this landmark of the Reserve, however, we have to come to terms with the sad truth that the historic fabric that has been destroyed by this accident is irreplaceable and forever lost," the statement reads.

Penn Cove Pottery owner Steve Eelkema said neither he nor his wife, Mary Beth, were in the store when the accident occurred at about 8:45 a.m. Neighbors alerted them to the collision after noticing the blaze. The Washington State Patrol reported that Ranbir Singhnahal, a 53-year-old Canadian, was driving the semi north on Highway 20 and failed to maneuver a curve, causing the truck to tip onto its side and slide through a guardrail into the small red building perched on the side of the road.

A corner of the pottery gallery was destroyed by the collision and subsequent fire. KIRO 7 News reported that two bystanders pulled the truck driver to safety after the accident. According to the State Patrol report, Singhnahal was injured in the collision and transported to WhidbeyHealth Medical Center.

The State Patrol is investigating the cause of the accident. Drugs or alcohol are not considered to be factors in the crash. On Monday afternoon, Steve Eelkema said he did not have an estimate for the total value of the damage, though he did say that some of the gallery's art inventory was lost in the collision and fire or damaged by water and smoke.

He said he and his wife are in the process of figuring out what to do next. This incident is the second time in less than three months that a vehicle has gone off-road and struck a building on the property. In April, a pick-up truck crashed into the wooden building adjacent to Penn Cove Pottery, which the Eelkemas were using as a storage facility.

Mary Beth Eelkema told the Whidbey News-Times in April that drivers often take the curve near the pottery store too quickly; the brick building had been struck by another vehicle at a prior point of the Eelkemas' tenure. The couple purchased the building in 2001. After a year of renovations, they opened Penn Cove Pottery, which featured the works of many local artists.

Steve Eelkema said owning and operating the gallery has been a big part of the couple's life for the last two decades. The building, formerly known as the Hingston Store, is one of many historic structures within Ebey's Landing National Historical Reserve. The original wooden structure on the east side was built in 1905 and served as a country store and post office.

The brick building that now houses the pottery gallery was added on to expand the store around 1940. In 1945, it was purchased by the Trumbull family, who operated the store until the mid-1950s. The building has changed hands and housed a variety of businesses since then.

The building was awarded Ebey's Forever grants in 2013 and 2019 to replace the roof, repoint the brick of the exterior masonry walls and repair the brick chimney.

Photo by John Fisken The semi truck that crashed into Penn Cove Pottery was totaled, and a corner of the building was completely destroyed. 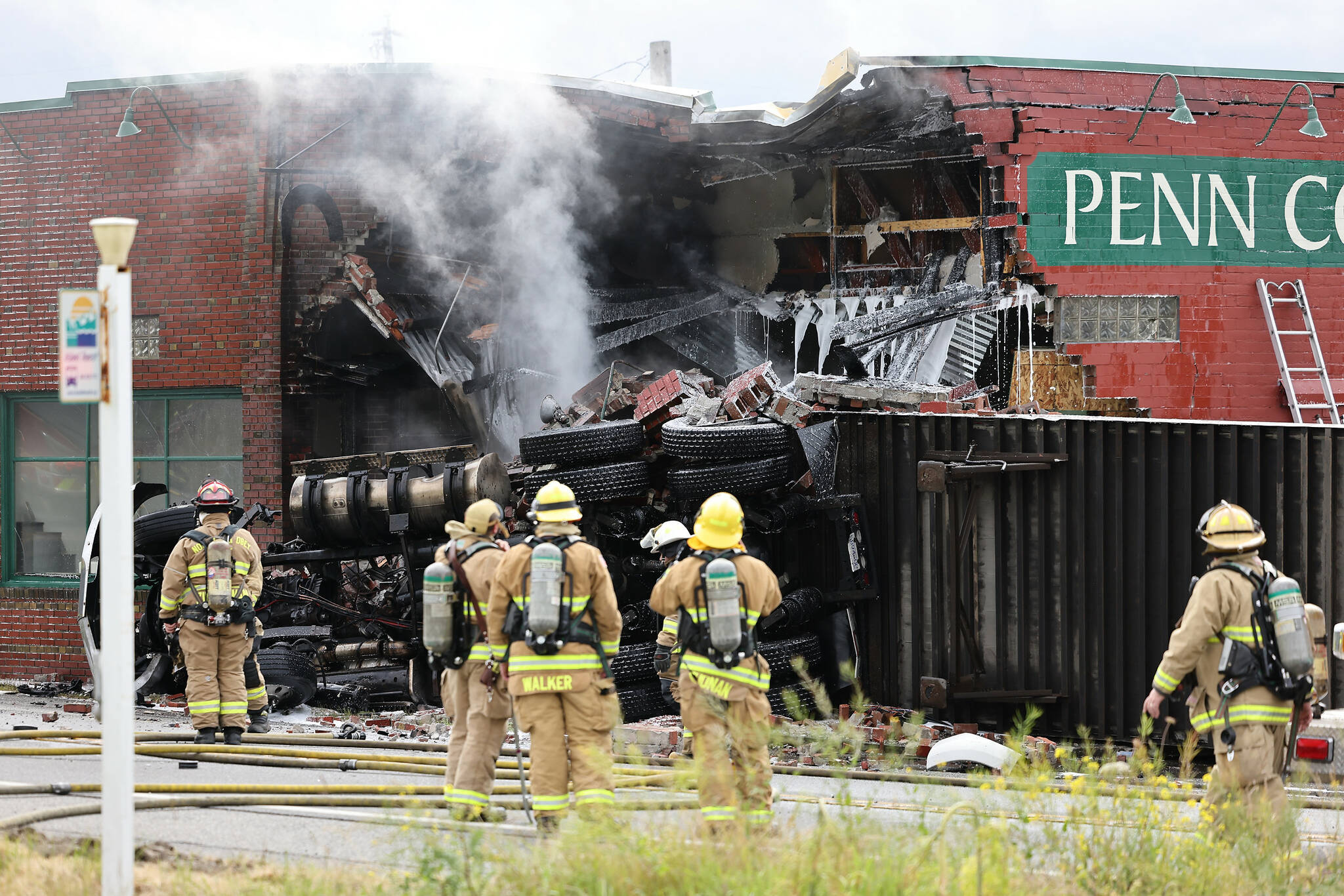 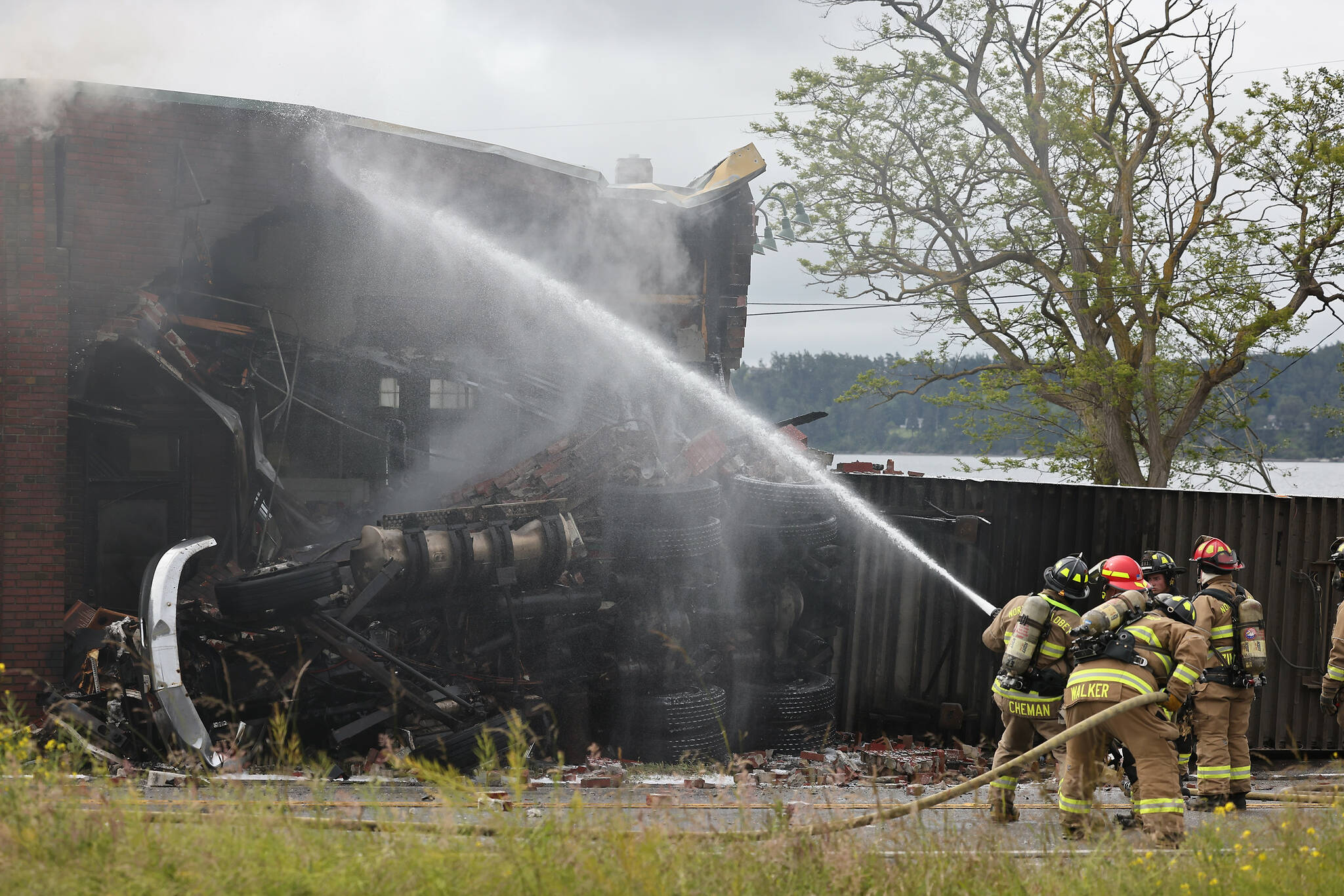