"The problem comes from the Russian blockade of Ukrainian grain," Borrell told EU foreign ministers -- making it clear once again who he believes is to blame for the looming global grain crisis. According to UN agencies, about 20 million tons of grain are currently stored in Ukrainian silos. "Millions of tons of wheat are being blocked," Borrell said. "Millions of people will not be able to eat this wheat. The war will have dramatic consequences for the world." He again urged Russia's government to end the blockade.

The EU and UN are working on a solution -- a kind of safe corridor to be negotiated with Russia and Ukraine for ships transporting grain mainly from Odessa through the Black Sea.

Borrell told DW that he is confident the UN can reach an agreement. "I hope that no one will be able to resist the pressure of the international community," he said, adding that anything else is "unthinkable."  "One cannot imagine millions of tons of wheat blocked in Ukraine while the rest of the world is starving," he said. "That is a real war crime." Borrell said that was something Russia will be held accountable for. "You can't use hunger as a weapon," he said. The Russian president, Vladimir Putin, blames sanctions against Russia.

The Kremlin also claims that Russian exports of grain and fertilizers are no longer possible. 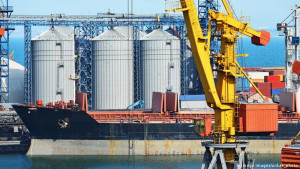 The blockade has stopped grain exports from leaving the port of Odessa It is the war that that is responsible for price hikes and the scarcity of energy and food, Borrell said, insistent that "it is not the European sanctions which are creating this crisis -- our sanctions don't target food, don't target fertilizer. Anyone who wants to buy Russian food or fertilizers can do so: There are not obstacles, they can buy, transport and get insurance."

Ukraine, meanwhile, accuses Russia of stealing wheat from regions where fighting is taking place and areas that are occupied -- and shipping it to Russia. Turkey, which borders the Black Sea and, under maritime law, guarantees free passage from there to the Mediterranean Sea, has offered to mediate. Turkish Foreign Minister Mevlut Cavusoglu said leaders were working on a solution that would not require clearing sea mines from Ukrainian ports. 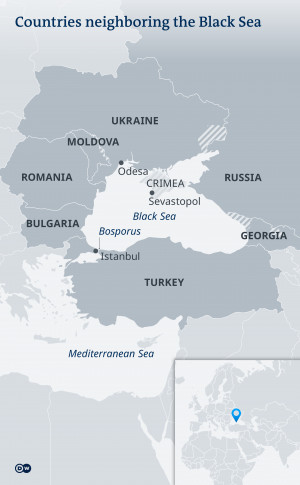 The European Union is considering sending European warships to protect grain transports -- a highly unlikely scenario, according to EU diplomats, because military confrontation with Russia's navy must be avoided.

There has been intense discussion, German Foreign Minister Annalena Baerbock told DW in Luxembourg. "Of course the challenges are huge, but they are in such a brutal area: They are insanely difficult in all areas," she said. "That's why it's important to look at all options." Baerbock said Germany would hosting an international conference on food security and grain exports from Ukraine in Berlin on Friday. Several ministers have already confirmed their attendance.

Over the weekend, G7 countries are set to address the issue at a summit in Elmau Castle in the Bavarian Alps. The German government, along with Poland and Romania, is continuing its efforts to increase the export of grain from Ukraine by rail, Baerbock said. Usually, 90% of the wheat would be transported by ship and only 10% by land. 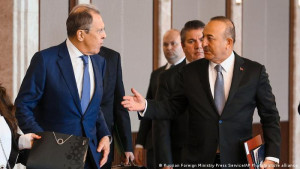 Clearly, Baerbock said, not all of the grain would make it out, but she said even a small percentage could help alleviate the global challenges. First, however, she said rail lines would have to be "upgraded" and corresponding freight cars would have to be found. Ukraine's rail network operates on a different gauge than Poland's and Romania's, so trains have to be transferred to other chassis or goods reloaded at the borders.

Wheat exports have dropped from 6 million tons a month before the war to about 2 million tons. Storage capacity for the new crop of winter wheat has been severely impacted by Russia's bombardment, according to Ukrainian Deputy Agriculture Minister Markian Dmytrasevych. The US and EU are working on setting up makeshift grain silos on the borders with Poland and Romania for future harvests.

The grain would be transported by truck or train to EU ports, US President Joe Biden announced last week.

Experts estimate that the laborious route will contribute to a sharp rise in the already skyrocketing wheat prices.

This article was originally written in German.