The Kenworth legacy started to build from its first truck sold in Australia. Back then, the uniquely and clearly American truck set a level of expectation that other brands introduced later would at first imitate, and then try to improve on.

The squared-off lunch box shape of the first K-Series that rolled off the line in March 1971 challenged drivers for 40 years, firstly with a set of 'monkey bars' that claimed to be access aids. 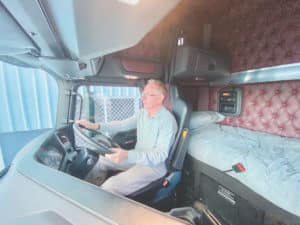 The author of this story enjoyed the short test drive out to Ipswich.

Trying to get on board with a burger in one hand and a drink in the other, in the wet, then squeezing into a seat position that had limited adjustment and a steering wheel that was resolutely fixed, was at best a challenge, if not dangerous.

Each iteration of the 'K' made small improvements to the outline and interior, until 2011 when the K200 took some giant leaps. However, the truck still followed Kenworth's 'dunny door' approach to aerodynamics, albeit with slightly rounded corners and better light housings.

But it has always been on-the-road performance, reliability and therefore the balance sheet where the 'K' has scored its biggest tick.

Few, if any trucks running our highways and byways have the work ethic of the Kenworth brand.

And the devoted flock of diehard truck enthusiasts, many of which are operators, has largely stayed loyal, despite major advances in the technology and fuel efficiency of the big European brands.

The heavy-duty end of the truck workplace and in particular the linehaul sector has made big money out of the K-Series. The latest version, the K220, underlines that performance by starting out with a 97-tonne GCM and running up to 250-tonne GCM before you need to request a heavier rating.

Thankfully, Kenworth has been listening to drivers and owners a lot more over the past few years, and the changes to the trim, driver aid package, interior 'liveability' and details such as lighting and digital controls have delivered a K-Series that will comfortably follow-on from its predecessors with few of them opting out of the Kenworth family.

Available configurations of the new K220 reflect the growing size of Aussie combinations under PBS.

The K200 electrical systems operated on an older North American multiplexing standard, (NAMUX4) which was upgraded several years ago for the T-Series trucks. With the K220, Kenworth engineers have jumped over the "Ts" and opted for the latest VECU01 architecture, which integrates a parallel control unit and an accelerated Baud rate - 500kbps - plus signals for the chassis module.

Simple really, and no, I don't fully understand it either. And yes, we can expect the Ts to move up to the new standard soon.

VECU01 means Kenworth engineers are free from the electrical capacity and speed hurdles that slowed the integration of new technologies into the K200s, and means new bright ideas can be seriously considered without being routinely discarded because the system was max'd out.

In reality, better tech to most of us drivers means a wider info screen and adaptive cruise control, but the systems underneath the surface are critical to a truck being able to accept modifications and add-ons well into the future.

So, excluding an electric driveline, the K220 is pretty much future-proof, bodybuilders can also plan accessories and componentry without fear of stale instruction signals, and operators can get on with what they do best. 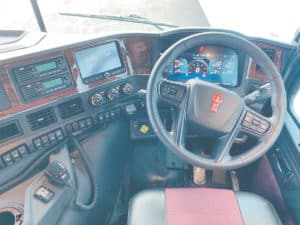 The driver now has everything at their fingertips.

The party trick is a press of a button on start-up - the K220 will do its own electronic health check - I watched it scroll down with a tick next to all the systems (a couple of crosses told me the borrowed trailer wasn't quite up to standard).

At the end of the day on shut down, it will display a detailed trip and vehicle summary, including average fuel economy, idle time, cruise control usage as well as any potential mechanical issues. PACCAR Connect Telematics are also integrated.

An expanded range of vehicle functions and settings are now on the steering wheel and stalk controls.

Up to six external cameras can feed into the AVN giving drivers full visibility of what is happening around the vehicle. Admittedly, this was a run up from the Brown and Hurley dealership in Darra to Ipswich, or thereabouts, and return, so not much opportunity for an in-depth assessment.

That will come in the next few months as Kenworth has promised us an interstate drive when the trucks head around the country for dealer presentations.

I picked a manual with a single trailer to start with and apart from an embarrassing missed change or two - it's been two years! - quickly got back into the process of the 18-speeder.

With the chassis and suspension carried over from the K200 there wasn't much new to report in terms of road manners and feel.

The Cummins X15 still chugged away as it always has, and the steering requires more attention than the high-tech Europeans. That might be the next share point from DAF.

But driver comfort, instrumentation view and leg room is much improved.

The pedals are further to the front and the seat movement is increased. 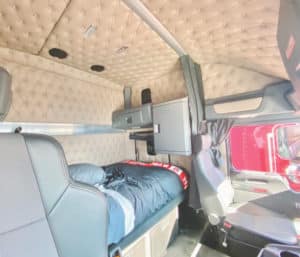 The 2.8-metre sleeper cab felt very much like a motel room rather than a bunk area.

The 2.8-metre sleeper cab felt very much like a motel room rather than a bunk area. The feeling of space is unmatched. Customer surveys had made that a clear necessity.

Outside there are new LED headlamps with integrated indicators and daytime running lights (DRL) that can be paired with bright look bezels.

Aerodynamics is somewhat a tongue-in-cheek subject for the K-Series. It's flat and square, and pushes a lot of air.

Rounded corners help but being virtually an Aussie-only truck, there'll be no big styling changes down the road. Kenworth's big aero news was "the new wind-cheating roof profile".

Admittedly, the data suggests an aerodynamic efficiency increase of 4 per cent, but that's over the K200, which never was a Lear Jet.

Some of that is from a 60 per cent increase in airflow from the climate-controlled HVAC system. The new roof profile increases headroom and triples overhead storage space.

My second drive was the shorter cab pulling an empty B-double set. Still loads of space though.

But the biggest difference was the all-new 18-speed Endurant XD ProTM automated transmission.

Eaton has delivered a box that is smoother, faster, and a bit closer to a full-automatic.

It's rated for 2780 Nm of torque so it'll handle anything the Euro V or Euro VI Cummins X15 can throw at it. In contrast to the European mob, around 65 per cent of Kenworths are still manuals, probably more so for the K-Series.

These trucks were prototype units. The factory won't start series production until the second quarter of 2023, and they'll keep the K200 on the line for several months after that.

But if you want to order one, expect to take delivery in mid-2024.

One dealer I spoke to sells around 120 KWs a year and has a confirmed order book for 240.

So good luck getting one.

In the meantime, we'll wait for our run across the Nullarbor.