More than three years after FedEx Logistics announced plans to move its global headquarters into the former Gibson Guitar factory in Downtown Memphis, the company celebrated the building's grand opening with a ribbon-cutting ceremony Tuesday. "A global pandemic might have slowed us down a little, but nothing can stop us from moving to the heart of Memphis!" Udo Lange, the CEO of FedEx Logistics, told an assembled crowd of about 200 people in the building's lobby. In an interview, he said some people have been working in the building already, and that FedEx Logistics now plans to move the rest into the building. "We invested more than £50 million into the building and we're bringing more than 600 people into this amazing place, right in the heart of Memphis," he said.

The event featured guest appearances by the Memphis Grizzline drummers, the Grizz mascot and the delivery robot Roxo. Lange said the company didn't want to hold the kickoff event until it was safe to do so, and the event came among a sharp downturn in COVID-19 cases. Among the speakers were Memphis Mayor Jim Strickland, Shelby County Mayor Lee Harris, and Richard Smith, a former head of FedEx Logistics and incoming president of FedEx Express. "Today we're not just opening the doors to a new building, we're opening the doors to another future," Smith said.

Several of the speakers celebrated the addition to Downtown. "The fact that you're here shows that Downtown is investable," Paul Young Downtown Memphis Commission president. The building stands at the intersection of Lt. George W. 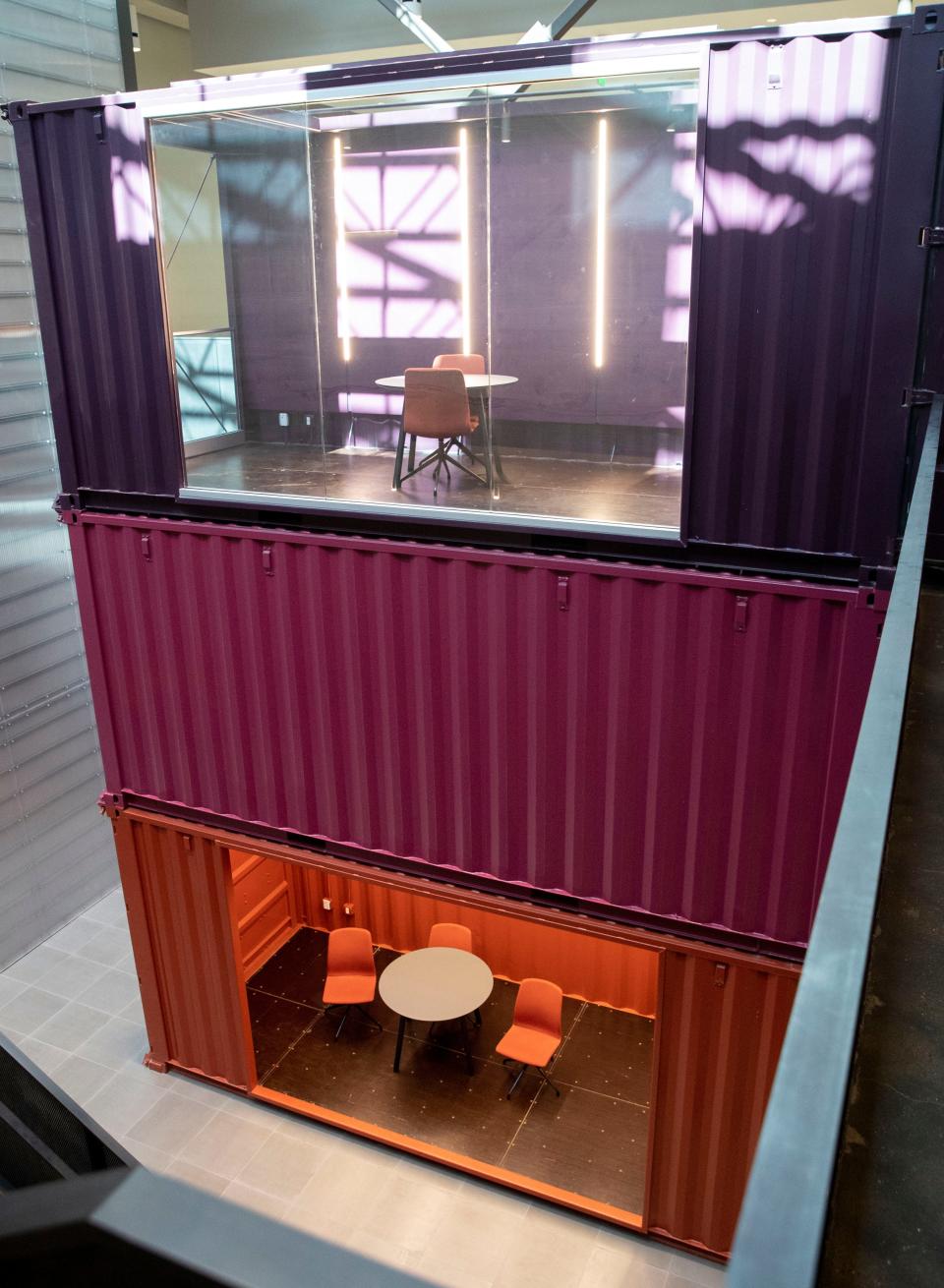 A collaborative space features tables to sit at Friday, April 1, 2022, at the new FedEx Logistics headquarters in Memphis.

FedEx gave journalists preview tours of the new space Friday. It's high-ceilinged and spacious. During a walk-through on Friday for members of the media and other guests, FedEx communications advisor Amariah Tyler pointed out colorful features, including cargo containers that have been repurposed into meeting spaces.

Story continues The roof of the business features a large outdoor seating area and another area that's covered in artificial turf, making it look like a green lawn. 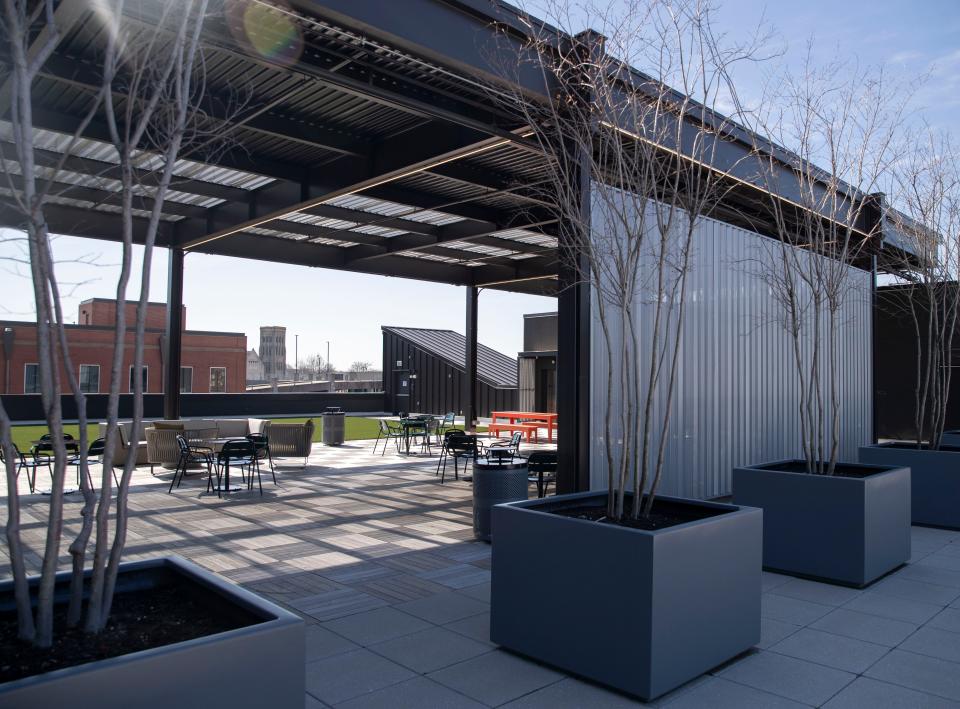 The rooftop features tables and grass Friday, April 1, 2022, at the new FedEx Logistics headquarters in Memphis.

Katie Hunt toured the building at the same time as reporters. She had a special tie to the place: She's an architect with LRK, a firm that redesigned it.

She said the former factory was very dark, and the redesign sought to change that through skylights and windows. "We always try to get as much natural light as we can in a space because people respond," said Hunt, who is also a leader with the South Main Association.

What is FedEx Logistics?

Among its services are customs brokerage, ocean cargo, critical transportation and even 3D printing -- in a 2019 interview, the company's CEO, Lange, a native of Germany, described it as like a set of golf clubs. "So, I go onto a golf course and I really don't know yet which club I need at which point in time, but I know I have them all in my bag," Lange said at the time. Some people have already been working in the building. One wall is decorated with a FedEx slogan, "I will make every FedEx experience outstanding!" Many people have signed their names under the slogan and added dates, and many of the dates are from mid-2021. 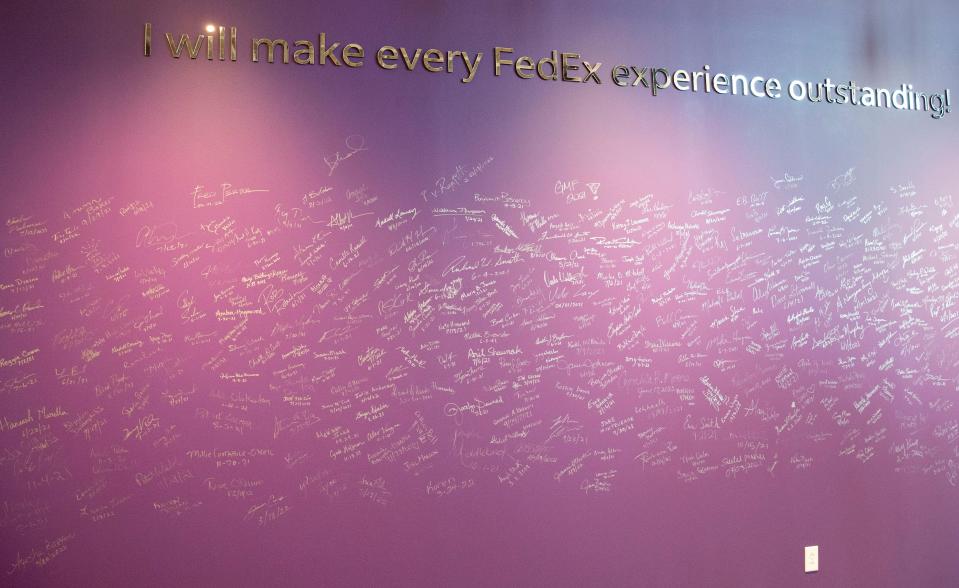 A purple wall features the signatures of employees Friday, April 1, 2022, at the new FedEx Logistics headquarters in Memphis.

Road to the grand opening

The road to the grand opening dates to October 2017, when Gibson Guitar announced it was closing its Downtown factory.

The property was subsequently sold to real estate investment firms Somera Road Inc. of New York and Tricera Capital of Miami. In February 2019, FedEx Logistics announced it intended to move its headquarters from the Crescent Center in East Memphis into the Downtown building. It was a somewhat surprising choice because most of FedEx's more than 30,000 employees in the Memphis area worked elsewhere, including the big hub at the airport, an information technology center in Collierville, plus other office spaces.

FEDEX EXPRESS: Richard W. Smith will become the next president of FedEx Express 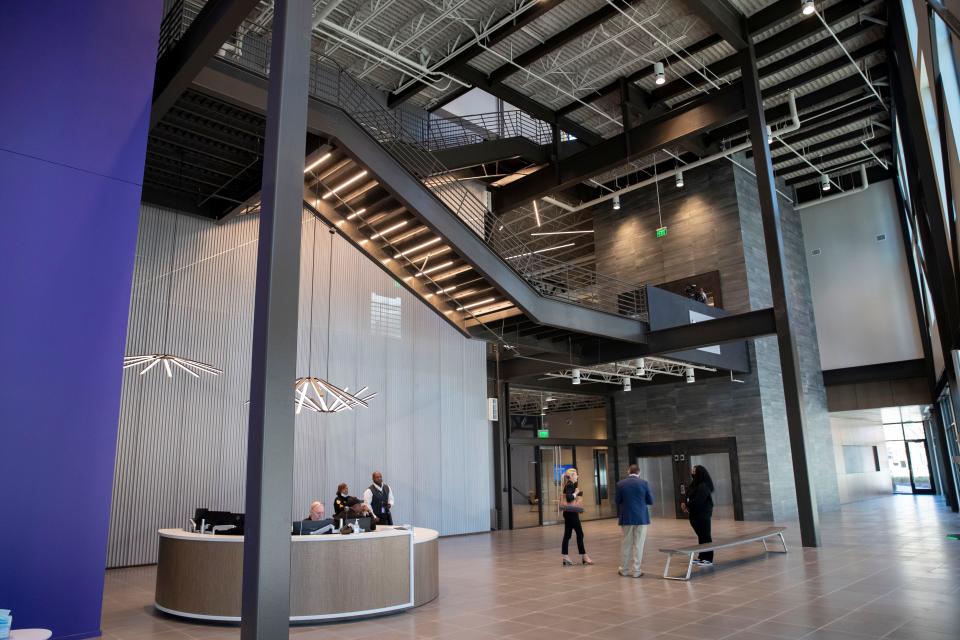 The lobby of the new FedEx Logistics headquarters leads to a collaborative space Friday, April 1, 2022, in Memphis.

Richard Smith, who at the time held the title of FedEx Logistics CEO, explained the concept. "Smith said that younger generations want to work in 'bustling urban cores,'" The Commercial Appeal reported at the time. "He painted a vision of FedEx employees commuting via Bird scooters, enjoying Downtown restaurants and taking in a Memphis Grizzlies game at FedExForum after work." "You've got to understand the vision: It's just a cool space," Smith said at the time while holding one of the last Gibson guitars to be produced in the building, colored FedEx purple.

Smith had credited former City Council member Berlin Boyd with coming up with the idea to move FedEx Logistics into the former Gibson Guitar factory. In March 2019, The Commercial Appeal reported Boyd's previously undisclosed financial ties to the project, including employment by FedEx Logistics. "There's nothing that I've done that's been wrong or illegal," Boyd said at the time. He lost his City Council reelection campaign later that year.

Boyd attended the Tuesday event but didn't speak from the podium. Added Berlin Boyd story as an inline link where you mention it 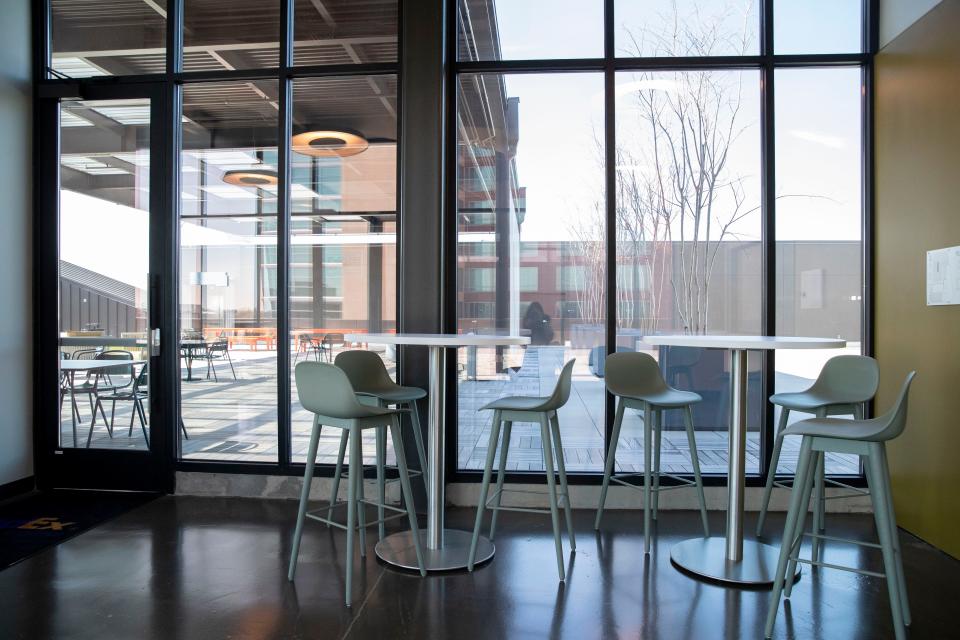 The rooftop features an indoor space Friday, April 1, 2022, at the new FedEx Logistics headquarters in Memphis.

The project received a variety of state and local incentives. The state of Tennessee gave a £10 million grant to the project.

FedEx Logistics and Somera Road were awarded a 22-year tax break. The Center City Development Corp. board also approved a £1 million grant to the project in 2019, and the Economic Development Growth Engine approved a £2 million grant to the project. At the time, an application said 323 current employees will be relocated to the building and 339 new employees or relocated from another state will be located at the building over a five-year period.

This story will be updated. Investigative reporter Daniel Connolly welcomes tips and comments from the public. Reach him at 529-5296, [email protected], or on Twitter at @danielconnolly.