The Sinister Message Behind 10 People Found Murdered in a Truck 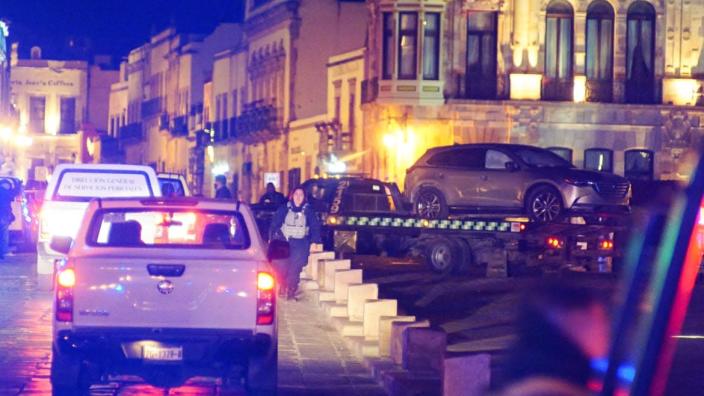 Earlier this month, the corpses of eight men and two women were found piled into a Mazda SUV that was parked under a decorated Christmas tree beside the Governor’s Palace in the city of Zacatecas, in north-central Mexico. According to a statement The Daily Beast received from the attorney general’s office, the victims were found early on the morning of Jan.

6 and their ages ranged from 18 to 45. At least one showed signs of torture.

Seven of them had been killed by “asphyxiation from strangulation,” the statement said. Independent photographs allegedly depicting the truck were leaked to The Daily Beast, and appear to show the victims with plastic wrap and packing tape placed over their faces to smother them. Mexican authorities have since claimed that two suspects have been arrested in connection with the incident, without providing more details.

We Finally Know How 43 Students on a Bus Vanished Into Thin Air All of this begs not a few questions. For starters, who were the deceased?

Using fingerprints, police determined that some of them had been arrested before for crimes like micro-trafficking narcotics and petty robbery. All were citizens of Zacatecas. How is it possible to leave a wagon full of corpses in front of a governor’s palace?

This might be the most embarrassing question for local authorities, as it appears the driver of the vehicle merely drove up to the palace in the Plaza de las Armas then got out and walked away without encountering any security forces. But who did it? And, more importantly, why?

“Well, according to the Jaliscos, they grabbed some of Mayo’s people, and those were the ones they left [in front of the palace],” said a cartel member in Zacatecas, who agreed to speak to The Daily Beast under the condition that he not be identified by name. In the lingua franca of the Mexican underworld, “the Jaliscos” is a reference to the Jalisco New Generation Cartel [CJNG]. CJNG is engaged in a power struggle in Zacatecas with a faction of the Sinaloa Cartel–Chapo Guzman’s old outfit–run by Ismael “El Mayo” Zambada.

Story continues
Monreal’s state–which, like its capital, is called Zacatecas–remains one of the most violent in Mexico, with 1,050 murders in 2021. In addition to CJNG and the Sinaloa Cartel, there are at least three other crime groups battling for dominance in the region, including one that calls itself the Taliban.

Because of its central location between Mexico’s two coastlines, its good roads and highways, and its proximity to the Texas border, Zacatecas is an ideal home for organized crime groups shipping precursor chemicals and narcotics across Mexico and into the U.S. Which is precisely why the competing cartels have chosen to go to war over it. Conditions are so precarious that state police officers have begun to resign in droves due to their fear of “uncontrolled violence,” according to a report by Mexican newspaper El Pais.

The same report indicated that at least nine municipalities in the state are currently without any on-duty cops at all. “Little by little we shall recover our peace,” Monreal said in an official video released shortly after the discovery of the bodies. “What we received was a cursed inheritance.” The governor did not respond to interview queries from The Daily Beast. The cartel insider told The Daily Beast that Monreal had indeed inherited a problematic situation, because “the previous administration had arrangements and protected [the cartels].

Then the new administration arrives and doesn’t want to align itself.” He added that the bodies left outside the palace were intended as a message. “So they threaten him by saying: Get in line or you already know what is going to happen to you, and the whole area is going to heat up too.” The source explained that it wasn’t just Monreal’s immediate predecessor who had allegedly been corruptly abetting narcos. “Historically it has always been arranged with the authorities, all previous governments have been arranged. Only this governor arrived and wanted to change and not respect the agreements.”

Teen’s Fingers Hacked Off With Machete for Snubbing Mexican Gang Not only has Monreal disrespected the old order of business, he’s also actively pursued a crackdown on the cartels by petitioning Mexican President Andres Manuel Lopez Obrador (often known as AMLO) for crime-fighting assistance. “Monreal petitioned AMLO for security assistance to curb the violence, impunity, and corruption in his state,” said Mike Vigil, the DEA’s former chief of international operations, in an interview with The Daily Beast.

Vigil said that Monreal’s decision to invoke a federal task force was likely to blame for the cartel’s alleged body-dumping attempt at intimidation last week. In response to Monreal’s request, “the president recently implemented a Plan de Apoyo [Plan of Support] for Zacatecas and has started sending hundreds of National Guard and army troops into the state. This has raised the hackles of the cartels,” said Vigil, who drew a straight line from the Support Plan to last week’s incident.

“The ten cadavers in the SUV left in front of the palace by the Jalisco cartel were meant as a message to the governor that they will kill him if he takes further action against them,” he said. Vigil also expressed doubts about the two alleged suspects authorities said they had arrested. “The two detained individuals were not named, nor paraded before the Mexican media, which leads me to believe they were bogus. The Mexican government does this on a regular basis to save face on high-profile cases,” he said.

Nevertheless, the presidential initiative in Zacatecas appears to have paid some early dividends. The day before the bodies were found at the palace, a CJNG capo known by the alias of “27” and one of his top lieutenants were captured. Luis Medina, a columnist for the magazine Zacatecas en Imagen, said “the arrest of 27” could have been the initial impetus behind a large-scale death threat left at Monreal’s doorstep.

But Medina also said he believes this act of extreme violence was done with a bigger goal in mind. Medina said the cartel’s true purpose in dumping the bodies in public was “exposing Lopez Obrador’s strategy, to weaken it, [to show it] as a failure by stimulating social outrage.” According to Medina, it’s a mistake to underestimate the cartels’ ability to act with foresight, or to presume there isn’t a method underlying their terror tactics. “Those who suppose that organized crime does not have political goals, do not understand,” Medina said.

On the same day that the grisly discovery was made in Zacatecas, a state vehicle was blown up by a grenade outside the Baja California attorney general’s office in Tijuana. A narcomanta, or banner, threatening the AG’s life was also found at the scene. Cartels Target Top Cop as Killings Soar in Mexico

The DEA’s Vigil said the CJNG was likely behind this attack as well, as it “fits with their modus operandi and they are a principal player for control of the drug routes into the U.S. since the demise of the Tijuana Cartel.” Vigil echoed journalist Medina’s point about crime groups being able to carry out far-reaching and well-coordinated schemes, and said AMLO is also attempting to flex law-enforcement muscle in Baja. “The grenade attack on the Baja California AG is like the ten cadavers found outside the governor’s palace in Zacatecas, and was meant to send the message of don’t confront or interfere with us,” Vigil said.

AMLO’s administration has already established five of 12 newly planned bases and barracks for National Guard units in Baja, which is a major transit point for cocaine coming from South America as well as illegal opioids and other drugs. “The cartels have figured out that in order to gain control of drug trafficking routes, strategic seaports, etcetera, they have to keep politicians off their back while they fight other cartels,” Vigil said. “They are now operating with total impunity.” at The Daily Beast.

Get the Daily Beast’s biggest scoops and scandals delivered right to your inbox. Sign up now.