Coronavirus: What’s happening in Canada and around the world on Wednesday

The latest: The World Health Organization says there was a seven per cent rise in new coronavirus cases across Europe last week — the only region in the world where reported cases increased. The UN health agency said in its weekly assessment of the pandemic released late Tuesday that during the week of Oct.

Both the number of new cases and deaths reported worldwide last week was similar to a week earlier, the report said. The European region, however, was the outlier in terms of new cases. “For the third consecutive week the European Region has shown an increase in new weekly COVID-19 cases, with over 1.3 million new cases reported during this week,” the report said, noting that more than half of the countries included in the WHO region reported an uptick in new weekly cases.

Russia had the most reported deaths in the week covered by the report, with 6,897 deaths — a six per cent increase from a week prior. Russia’s health-care system is operating under great strain, Health Minister Mikhail Murashko said on Wednesday, as the national death toll from COVID-19 hit a daily high for the second consecutive day. President Vladimir Putin on Wednesday approved a government proposal for a week-long workplace shutdown at the start of November to combat an alarming rise in COVID-19 cases and deaths.

Speaking at a televised meeting with government officials, Putin said this period, from Oct.

-From The Associated Press, CBC News and Reuters, last updated at 8:15 a.m. ET

WATCH | Sask premier talks about moving COVID-19 patients out of province — and how the province got to this point:

14 hours agoAs Saskatchewan is transferring 6 ICU patients to Ontario, Premier Scott Moe admits that the province should have likely moved a week or two earlier on reenacting public health measures to curb the fourth wave.

What’s happening around the world 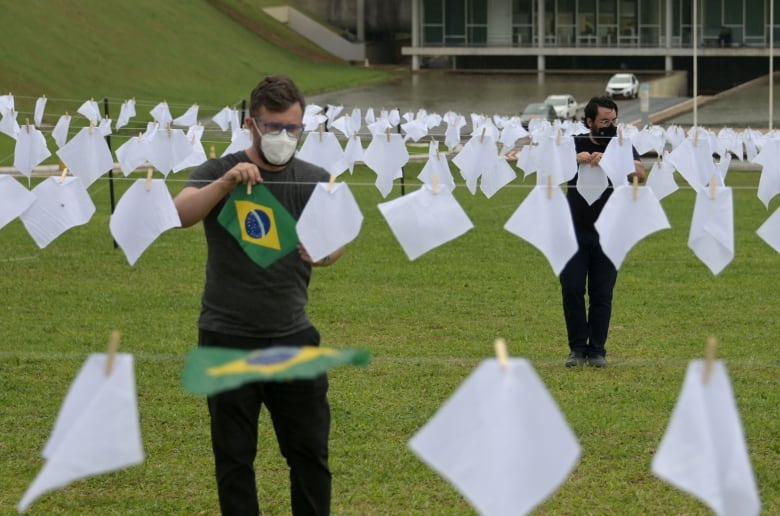 As of early Wednesday morning, more than 241.6 million cases of COVID-19 had been reported around the world, according to the latest figures posted by Johns Hopkins University. The reported global death toll stood at more than 4.9 million, according to the U.S-based university’s coronavirus tracker. In the Americas, thousands of unvaccinated workers across the United States are facing potential job losses as a growing number of states, cities and private companies start to enforce mandates for inoculation against COVID-19.

The senator leading a congressional probe into Brazil’s handling of the COVID-19 pandemic has recommended President Jair Bolsonaro be charged with homicide for alleged government errors that led to the deaths of thousands. In Africa, Algeria lifted an overnight curfew that was imposed in parts of the country last month. In Europe, Poland reported more than 5,000 daily COVID-19 cases for the first time since May on Wednesday.

The country of around 38 million people reported 5,559 new cases and 75 deaths. Since the beginning of the pandemic Poland has reported 2,950,616 cases and 76,254 deaths. Slovakia reported 3,480 new COVID-19 cases on Wednesday, its highest daily tally since March 9.

The Czech Republic reported 3,246 new cases, spiking above the 3,000 level for the first time since late-April. In the Middle East, Iran reported 81,785 new cases of COVID-19 last week, according to the WHO weekly epidemiological report, or 97.4 new cases per 100,000. The numbers were similar to the figures reported a week earlier.

In Asia, China reported a fourth day of new locally transmitted COVID-19 cases in a handful of cities across the country, prompting alarmed local governments to double down on efforts to track potential carriers amid the country’s zero-tolerance policy. A total of 17 new local cases were reported for Oct.

19, up from nine a day earlier, data from the National Health Commission showed on Wednesday. -From Reuters, The Associated Press and CBC News, last updated at 7:10 a.m.